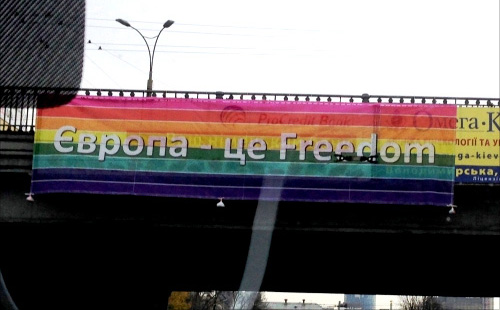 Provocations under the “rainbow” flag

With the approaching of the Vilnius Summit, where Ukraine hopes to sign the Association Agreement to the EU, the opponents of European integration become more visible. They are trying to convince Ukrainians that the rapprochement with Europe would not benefit us at all. On this background the opponents of direction of European integration talk in terms of "all methods are good" – including dishonest provocations, which some of them do not shun to use.

As one might expect, the myth of "total homosexualization of the country", as a result of the signing of the Agreement, is being used by the opponents as one of the main trump card: they try to scare Ukrainians with gay and lesbians, who are perceived here as some sort of mythological creatures. The society has a very dim and one-sided view of them, however scared of them, just in case. Precisely for that reason within the last month Ukrainians became witnesses of several provocations supposedly on behalf of the LGBT representatives, to which the gay community does not relate in any way.

As recently as on Monday October 21st, in Kyiv on Peremohy prospect someone hung a huge pseudo-rainbow flag banner with the inscription "Europe – is Freedom", that, according to the anonymous authors of this scheme, was supposed to cause the associations of the passers-by with gay who aspire to free Europe. In fact, the LGBT (lesbian, gay, bisexual and transgender) has nothing to do with a mysterious eight-color flag – at least because of the reason that the symbol of gay rights is a flag consisting of a six different color stripes.

Other media spread the message that some civil initiative called "Leading gay squad of Ukraine" held an action against homophobia on the same Peremohy prospect. However, the above mentioned sources provided no evidence supporting the conduction of this action, but quoted nameless community representatives, bragging about "the true values of the rainbow flag".

All-Ukrainian Union "The Council of LGBT organizations of Ukraine", officially registered by the Ministry of Justice of Ukraine, up until now have not heard anything about "Leading gay squad of Ukraine", and therefore there is reason to believe that this action – if any actually took place – was another provocation. Thus, gay activists do not hope that someone will take the responsibility for the actions.

UPO "Gay Alliance Ukraine" invokes the mass media not to escalate an already tense social situation, and in the case of any questions contact The Council of LGBT organizations of Ukraine, who will be able to provide clarifications and to separate the wheat from the chaff. Gay organizations report in advance about all their public actions officially registered in Ukraine, not making a secret out of them, and all kinds of "surprises" in the present situation might be interpreted as fakes, organized by those playing into the hands of opponents of European integration.

According to the president of UPO "Gay Alliance Ukraine" Taras Karasiichuk, Europe has its own indisputable values on human rights and freedoms, to be pursued by our country. However it will not happen in one day:  to become a real state ruled by law Ukraine requires long and laborious work of civil society leaders together with government agencies.  Therefore epatage actions witnessed by the residents of the capital will unlikely help LGBT activists. "The gay community in Ukraine may influence, although still only indirectly, such high-level political processes as European integration. And such work is being conducted, but it is the work of another nature than questionable actions involving clowns under the wrong flag, which they try to attribute to us", – claims Mr. Karasiichuk.

And once again about provocations: the beginning of “Rainbow Maidan for Yanukovych”