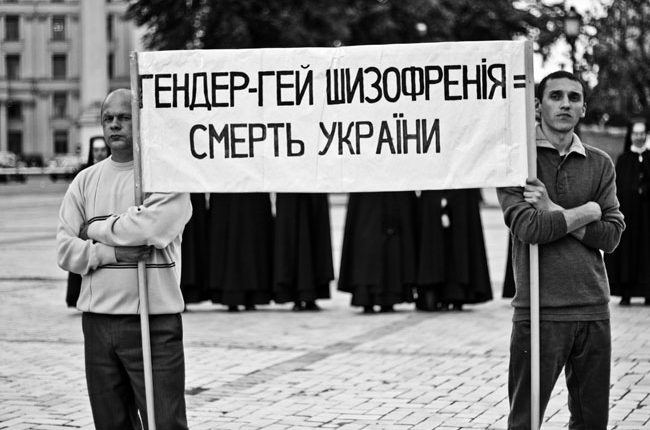 The inscription on the picture says: "GENDER-GAY SHIZOPRENIA= DEATH OF UKRAINE"

We invite you to visit an opening of a joint photo exhibition of Stanislav Mischenko and Ganna Grabarska that will take place on 24th of September at 7 pm in a gallery "MainstreamGirls". At the opening you will be able not only to see the photos, but also to ask questions to their authors.

The idea of the exhibition is to show different layers of the reality existing around us. The photographers united two completely different series of works into one exhibition. The one is about tolerance while the other is about its absence.

A series of photos "K-olours" presents the viewer its heroes – gay, lesbian and transgender people. However, on the pictures we can see only silhouettes, which the author has filled with colors of his native city – leaves, mosaics, graffiti.

In his works, Stanislav Mischenko underlines that in Ukraine representatives of the LGBT community live invisibly, but still being a part of the diversity that surrounds us. Each photo in the series is distinguished by its prevailing color: placed in a certain order, the pictures create a rainbow pattern.

For a year and a half Ganna Grabarska has been taking pictures of representatives of religious communities protesting against providing gays and lesbians with equal rights. The author of the exhibition give the visitors an opportunity to look into the eyes of heroes on the photos and try to understand the nature of their hatred towards "those who differ from us" – despite the fact that one of the basic of religion is the thesis that "God is love".

The inscription on the picture says: "Obscenity shall not pass!"

Declaring their position the believers "pose" not only for the photographer, but also for the whole world. Having become acquainted with Ganna's photos viewers might ask themselves a question whether such position has a right for existence.

The exhibition will last from 22 till 30 September in the gallery "MainstreamGirlsGallery" (Kyiv, 31 Turivska Street). Free admission. The exhibition is held by UPO "Gay Alliance Ukraine" under the support of the German Society for International Cooperation (GIZ).

Gayd! A stylish adding to the family of our Printed Edition