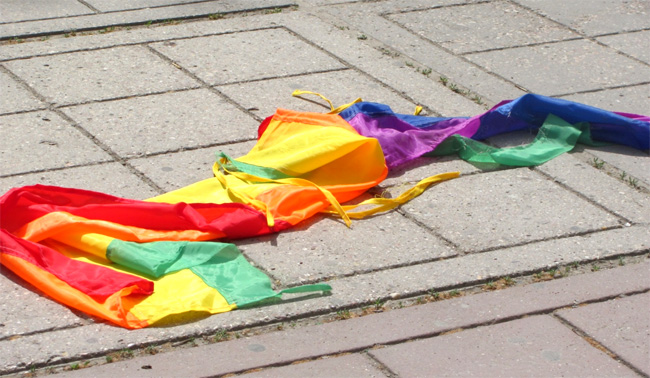 "Probably few readers will remember today, when exactly we were flooded with information from the East about one sensitive issue shaking Ukrainian political scene shortly before the Maidan. Ukrainian Parliament has approved a bill prohibiting propaganda of homosexuality in the second reading", – writes the Czech edition of Neviditelny pes in an article "Homosexuals between Ukraine and Russia". Translation of the article published by InoSMI.

The newspaper reminds that it was in fact temporary legislative initiative coming from Russia, which continues being "exported" today to the parliaments of other former Soviet republics. For example, to the Kyrgyz Republic. And recently, a similar initiative was offered in Kazakhstan.

The current trend of prohibiting "propaganda of homosexuality" legislatively was preceded by the wave of constitutional safety nets in case of threat of registration of the same-sex marriages. Over the past years the marriage has been limited as the union of a man and a woman by Lithuania, Moldova, Armenia, Latvia and Georgia. That is the country that can not be suspected of imitating the Russian establishment or Vladimir Putin personally.

If you're wondering what is going to happen to the Ukrainian parliamentary project next, the answer could be found in this statement: " Yanukovych symbolizes the East and homophobia, while Turchynov (by the way, he used to be a conservative Baptist pastor), Yatseniuk and Poroshenko represent the West and gay support", – writes the newspaper. – But this is not true, and not even because military fuss pushed everything on the periphery of public life".

According to a recent social survey, 72% percent of the population in Ukraine shows negative attitudes towards gay people and only 13% – positive (the newspaper does not specify the source of information and the name of the sociological institution that conducted the mentioned above survey). These figures are similar to those contained in the Russian studies.

There are no reasons to believe that the data was intentionally distorted – there is rather a reason to assume that a society without powerful indoctrination from the gay activists remains implicitly homophobic.

Nevertheless let us come back from the theory to reality of the horrors of war, which take place in close proximity to the European Union. Recently, in the reportage of Al Jazeera were given a few testimonies of gay refugees (ethnic Russian) of the so-called People's Republic of Donetsk. Escaping from the increasing homophobia, they had to flee to central Ukraine with a hope that here, in the citadel of "Europeanness", they will find a temporary shelter. But according to Al Jazeerа, charitable organizations that help refugees to find shelter in Kyiv repeatedly denied these refugees help. So the situation for gay people in the so-called pro-European part of Ukraine remains as unfavorable as it was before the war.

The inscription on the picture says: "LGBT rights = Human rights".

The same way there is obvious explicit homophobia in the speeches of Russian nationalists. The region was homophobic before, because there is some sort of proportion between the number of pro-European citizens and a lower degree of homophobic attitudes in the society. Crimean "president" Aksenov recently stated, that if in the Crimea gays tried to organize any meeting, than the police would be called together with "the self-defense forces". The highest-ranking Russian official in the Crimea warned that the LGBT community on the peninsula had no chances. He also added that if homosexuals would try to conduct a gay parade, than the police and self-defense forces will react immediately and "in three minutes would quickly explain to them what kind of sexual orientation they should stick to". By the way, it reminds the rhetoric of the current "peacemaker" Alexander Lukashenko, who had often publicly stated that there is no place for gay people in Belarus, and on this ground for several times he even made verbal attacks towards the former German foreign minister, Guido Westerwelle, openly gay.

"It is clear that the final parliamentary reading of the bill prohibiting propaganda of homosexuality has been already held, – writes the newspaper. – But it is still not clear that after the accession of peace (if, of course, it will happen) the story will have its happy ending. And it is difficult to predict whether the life of gays will improve in the future.

But even if it happens, in terms of ethics it still will be a double-edged topic. Yes, the state must not allow homosexuals to be persecuted, driven from their houses, excluded from the social life. On the other hand, the church (including the Orthodox) may offer an alternative for gays – not the one offered by an European liberal Protestant gay activism. It can offer understanding and support in the struggle against practice of homosexuality (often undesirable) and the search for alternatives that tradition somewhat mysteriously calls "new life in Christ". The question is whether today's Russian and Ukrainian churches will be able to do it; whether they will be able to decode and convey what is hidden behind this phrase, rather than to cultivate (along with a prudish establishment) schematic, lazy and closed mentality. I'm afraid that the image of the church on the east from us (at least from the perspective of works with the homosexuals) is quite bad. It is worse than the one (often by right) we criticize here, in the West".