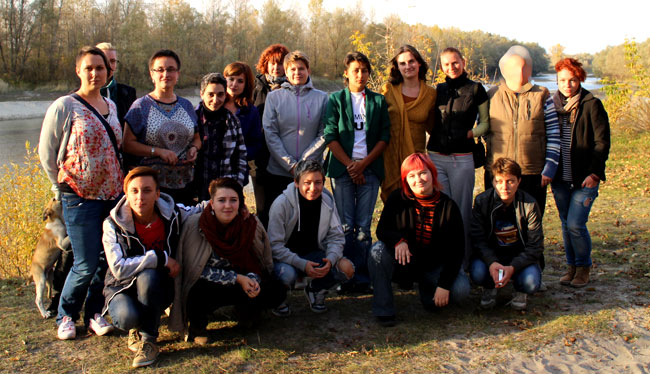 Outcomes of the First lesbian-feminist school

The First lesbian-feminist school for beginning activists has accomplished its work. We call it the first since we hope that this event will be conducted at the annual basis. The school was organized by UPO "Gay Alliance Ukraine" in partnership with Heinrich Böll Foundation.

This time the school gathered energetic participants and professional trainers, who during five days were helping each other to understand the intricacies of feminism, activism, organizational work and other important issues. Day-time lectures and sessions smoothly flows into evening gatherings with even more interesting discussions.

The school was attended by twenty activists and seven trainers from different corners of the country. Some of the participants have already experienced activists work, even professionally in NGOs, the others have heard of this idea for the first time. Judging by the feedback, almost all the participants are ready to join regional LB initiatives in their city and even to start their own project.

The programme of the school was built in a way to raise the maximum number of questions and to motivate the participants to explore them deeper independently. Because there is a lot of work ahead on development of woman initiatives both in the practical and academic areas.

Most of all, we were pleased to see that participants of the school represented the most different approaches to work: organizers of street actions, project coordinators, as well as the researchers of feminism and gender issues at the academic level. Our concerns that there are few activists in Ukraine were not justified.
UPO "Gay Alliance Ukraine" intends to continue supporting women's initiatives in Kyiv and regions.

Hotline for LGBT launched in Ukraine!