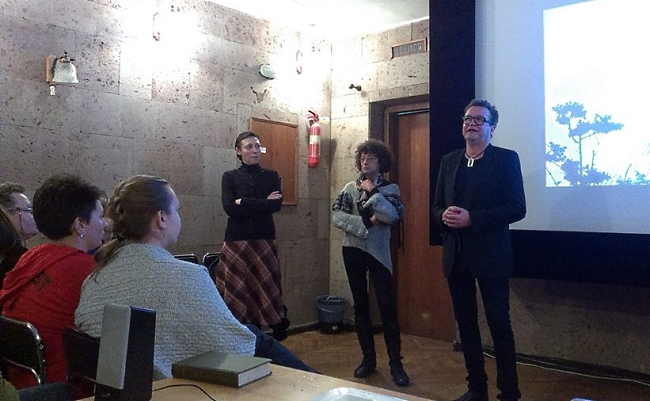 On November 6 in Kyiv was held premiere show of the documentary movie "Come Out of the Shadow" – the first video about the Ukrainian LGBT movement.

According to the organizer of the screening movie show Anna Dovgopol, a program officer from the Kyiv branch of Heinrich Böll Foundation, initially the session was planned to be conducted in the movie theatre "Zhovten" at the big screen. However, because of the recent events, this idea had to be abandoned. Therefore, the premiere took place on a smaller platform, namely in the Cinema House. Despite some technical challenges, which had to be overcome in the beginning of the session, all viewers waited patiently for its start. What is, as Anna joked, became one more confirmation of unity of people around the idea of activism.

The movie was made by German filmmakers Lorenz Kloska and Alexander Vinogradov. Kloska speaks Russian fluently – according to the director, he spent much time in the former USSR countries and calls himself a person who loved Russian culture. Therefore the audience could talk to him without an interpreter.

Kloska said that when in Russia started acting so-called "law prohibiting propaganda of homosexuality", he experienced highly negative emotions: "Of course, I felt as if the law had been adopted against me personally. Naturally my first desire was to do something with the persecution of LGBT people in Russia, but I realized that first of all I knew few people there and moreover it would be highly difficult to work there".

Thanks to his colleague Alexander Vinogradov, Lorenz met Ukrainians: "It was March and I thought that if this train didn't go to Russia then perhaps I could try to support Ukrainian community, in order to avoid here the same scenario that happened to Russia, – told the German director. – Thanks to Munich contact group MunichKievQueer I managed to reach Ukrainian activists and after I heard about the KyivPride festival I understood that I could not miss it".

Kloska told us that the movie was filmed with a very modest budget and he didn't expected himself that such a long and intense video would come out of the material that was shot in Kyiv within just a week: "but we managed and maybe it is not our final word. If next year there is again an attempt to conduct Pride hear in Kyiv then maybe I will come and try to document it in order to see where this story will lead us".

As it was said above, "Come Out of the Shadow" is a first movie about the Ukrainian LGBT movement. It consists of many interesting, acute and informative interviews with Ukrainian activists representing various organizations. Those stories were about themselves, their activities, the situation with LGBT community, homophobia and the legislation of the country and spoken by Stat Mischenko (Gay Alliance Ukraine), Bogdam Globa (Fulcrum), Bogdan's mother – Olena Globa, who is a leader of parents organization to support their LGBT children "Tergo", Konstantin Maltsev (QueerHome Kyiv), Maxim Kasyanchuk (Donbas-SocProject), Olena Shevchenko (Insight) and many others. A lot of attention in the movie is paid to the pride festival KyivPride and to the fact that this year the city authorities refused to support the Equality March, an open street action that was cancelled at the very last moment, under the pride-week events.

Related article: Cancellation of the Equality March: The Story on how the organizing committee spoke with the city authorities

According to the movie authors, its premiere screening has already taken place in Munich and will be also soon shown in Berlin with the support of the participants of the LGBT Russian-speaking organization "Quarteera". And soon the film will be submitted to various documentary film festival for the purpose to declare it to the competitive and non-competitive programs.