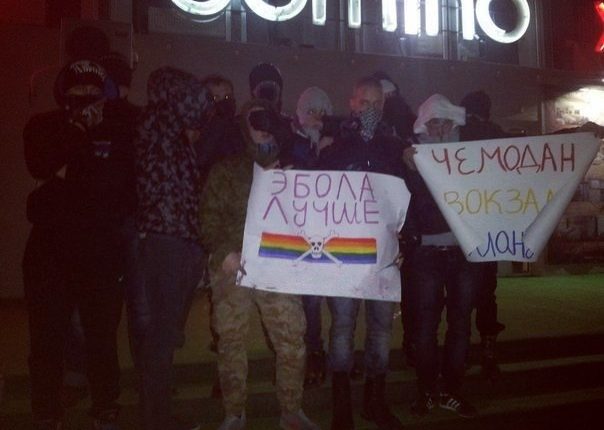 The inscription on the picture says: "Ebola is better than… Suitcase -> railway station -> Holland"

On a Sunday night, November 2, Odesa night club "Domino", which hosted the competition of travesty artists Drag Queen Fest Odessa-2014, was attacked. About twenty young men stormed the club trying to disrupt the event. It was reported by the organizers of the competition – activists of friendly to LGBT Odesa organization "Life Puzzles".

Around 2 am young men in camouflage with bandages on their faces surrounded the facility shouting homophobic slogans and trying to get into the club. Young men held posters in their hands with slogans "Ebola is better than queers", "Suitcase. Railway station. Holland" and were extremely aggressive. According to eyewitnesses, the attackers brought along bats, brass knuckles and edged weapons. At the same time police officers located nearby (by agreement between the organizers of the competition and the city authorities, law enforcement were involved to during a party to ensure security) were completely inactive.

Bickering between organizers of the event and "gay-fighters from people", whose pressure was restrained by the club guards, lasted more that an hour, then the young people went away. Later on the responsibility for the attack on the club "Domino" was undertaken by the representatives of so-called movement "Heritage Odesa". Its supporters stated that supposedly that night in the club was a minor to whom some alcohol was sold.

Participants of the so-called movement "Heritage Odesa" are the local followers of the Russian neo-Nazi Maxim Martsinkevich, also known under the nickname "Tesak" ([Transl.Note]: Hatchet, Hand Axe, Machete), who are engaged in the following activities: by a familiar scenario they  "catch" pedophiles, Spice distributors, Caucasians and other "bandits", who, in their opinion, defile the youth and are disruptive in the city. They record all of their attacks on the video camera and then put it in the internet.

The Drag Queen Fest Odessa competition was conducted in Odesa for the second time. For its organization responsible the public association "Life Puzzles" under the support of Mykolaiv association of gays, lesbians and bisexuals "Liga". Last year, the similar event had been also attempted to be disrupted by the supporters an extremist community "Occupy-pedofilyay", the number of which exceeds 100 people.

It is worth noting that recently the number of attacks on LGBT-related events in Ukraine has become more frequent. Thus, on October 29 the movie theatre "Zhovten" was set on fire during the film festival "Molodist" session of the movie about life of transgender people, and on October 31 supporters of the "Right Sector" disrupted the show of LGBT movie from the program "Sunny Bunny" in the cinema "Panorama". On June 8 armed people attacked night club Babylon in Donetsk, claiming that there should be no gay clubs in the city. And the capital gay club "Pomada" (Lipstick) starting from the beginning of Maidan has been in total under seven attacks.