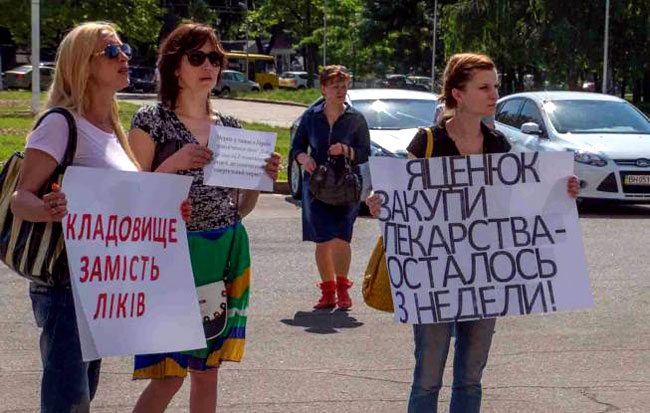 The inscription on the picture says: "Cemetery instead of medications. Yatsenyuk, purchase the medications – there are only 3 weeks left!"

Odessa could not stand aside of the all-Ukrainian protest action "Cemetery instead of medications", which took place in the end of last week. On May 27 at 10 am people living with HIV, as well as volunteers of the Queer Home Odessa and other non-governmental organizations protested against the fact that many citizens of our country are left without the right to live.

We have already written that due to "concatenation of circumstances" thousands of HIV-infected people can be left without antiretroviral therapy (ART, which condemns them to a slow and painful death. That's what the protesters said about why they decided to take part in the action:

Yulia, the activist of the Queer Home Odessa: "I find it outrageous that such a situation has emerged at all. How can these people be left alone to face their fate, as any delay in taking their medications can simply kill them!".

Dmytriy, activist of the Queer Home Odessa: "There are HIV-positive among people I know and these medications are the only salvation possible. I do not want them to die because of the late deliveries by pharmaceutical companies – it is necessary that the government would immediately intervene".

Let us recall that the similar protests were held throughout Ukraine: in Kyiv under the Cabinet of Ministers, in other cities – under the regional administrative buildings.

The activists of the Queer Home Odessa decided not to use any LGBT-related symbolic during the protest, because, in the first place, they consider participating in the pickets as their civic duty, and, secondly, because it is a problem not only of non-governmental organizations, but also of all Ukrainian citizens.

The inscription on the picture says: "Cemetery instead of medications"