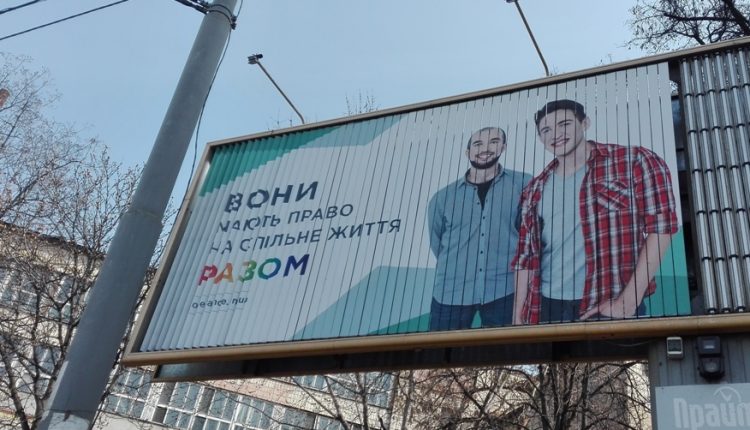 “We chose these photos for our spring campaign because the society gives more hostile reception to gay couples. By the summer we plan the campaign with lesbian couples photos. The action plan of the National strategy on human rights for the period until 2020 includes bill on civil partnerships that includes same-sex couples and is to be worked out at the end of 2017. Sooner or later this question will be raised in the society and we would like to talk about it now as homosexual couples, as well as heterosexual ones, should have equal rights and chance to legalize their relations. More than a million Ukrainians belong to LGBT and 47% of them are in a relationship. We really want to overcome the stigma in relation to homosexual couples in Ukraine” told GAU programming director Yurii Yorsky.

Let’s recall that Queer Home Kyiv activists and volunteers organized antidiscrimination campaign handing out similar leaflets and talking to Kyiv people about the human rights for LGBT in Ukraine. The passers-by were rather reserved in their response to the campaign but some of them claimed that homosexuality “will bring Ukrainian nation to extinction” and “such campaigns are nothing more than propaganda.” Kyiv citizens were also interested how exactly LGBT are discriminated, asked about civil partnerships that are to be developed and implemented in 2017 and were most of all surprised with civil partnerships being not only for homosexual people but for heterosexuals as well.