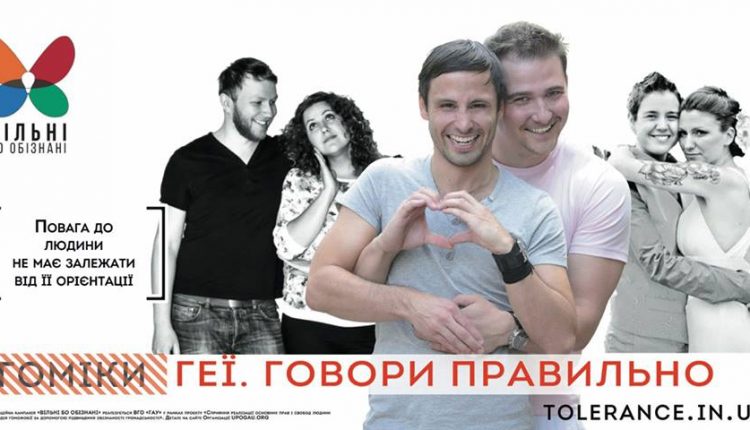 The inscription on the picture says: "Free while well-informed. Respect for a person should not depend on their sexual orientation. Faggots (crossed). Gay. Say it right. Tolerance.in.ua. *Information campaign "Free while well-informed" is being implemented by UPO "Gay Alliance Ukraine" under the project "Assistance in realization of the fundamental human rights and freedoms and combating homophobia by increasing public awareness". For more information please visit the website of the Organization – UPOGAU.ORG"

In the framework of the project "Assistance in realization of the fundamental human rights and freedoms and combating homophobia by increasing public awareness", which UPO "Gay Alliance Ukraine" implements under the support of the Embassy of the Netherlands in Ukraine, was developed a new banner campaign. Its primary goal is a call for proper communication; and one of the main tasks – to increase the level of tolerance in the Ukrainian society.

Unfortunately, in everyday speech, and sometimes even in mass media, we often have to deal with some specific characteristics given to representatives of certain demographic groups, which can not be called tolerant at all. We even heard such statements from the MPs of the Verkhovna Rada of Ukraine. In this connection the authors of the project find it necessary to popularize the basic concepts of human rights, including – by telling about how to avoid stigmatizing definitions and teaching Ukrainians the correct terms and definitions. Because sooner or later any person might become a victim of such attitudes since all of us one way, or another belong to a certain minority(ies): based on ethnicity, disability, gender, sexual orientation etc.

The inscription on the picture says: "Free while well-informed. Jews are an ethnic minority with the rich cultural heritage. Yid (crossed). Jew. Say it right. Tolerance.in.ua.

(Yid (zhyd) translates to "dirty Jew,” in Ukraine this word is a slur that has been used against Jewish people since the Holocaust.)

Six types of new banners with the general slogan "Say it right" appeared in five Ukrainian cities: Kyiv, Odesa, Kryvyi Rih, Vinnytsia and Zhytomyr. The posters encourage not to use the stigmatizing words in respect of people with disabilities, Jews, Roma, homosexuals, women and HIV-positive people.

Within the framework of the campaign, as in the previous year, it is planned to hold street actions in order to explain what human rights and democracy mean.

The inscription on the picture says: "Free while well-informed. People with disabilities have rights for equal opportunities and human dignity. Cripple (crossed). Person with disabilities. Say it right. Tolerance.in.ua.

Representatives of such well-known in Ukraine mass media as the Russian TV channel LifeNews have already reacted to the appearance of banners. On the company website it is stated that "in Dnipropetrovsk appeared billboards in support of gay rights". At the same time the words "European choice", to which Ukrainians are supposedly being called to tolerate, are enclosed in quotation marks. The publication contains untruthful information that local authorities of Dnipropetrovsk launched the "propaganda" of "European values": "And it was decided to start with the promotion of ideas of tolerance towards the representatives of sexual minorities in the Ukrainian society". Naturally the banners calling for the tolerance and using proper speech towards other demographic groups were not noticed by the LifeNews authors. Furthermore, the TV channel confuses the names of Ukrainian cities, without preamble jumping from the claimed in the header Dnipropetrovsk to Kryvyi Rih and lamenting that on its streets "appeared ad billboards with a color image of two men embracing, against which the traditional couples literally faded – to black-and-white snapshot".

"Let us add that in the framework of the plan for EU integration Ministry of Justice of Ukraine has promised this year to initiate the adoption of the law on prohibition of discrimination of gays and lesbians. Voting is scheduled for August, and, meanwhile, the Verkhovna Rada of Ukraine has already expressed its support for the document", – concludes the channel.