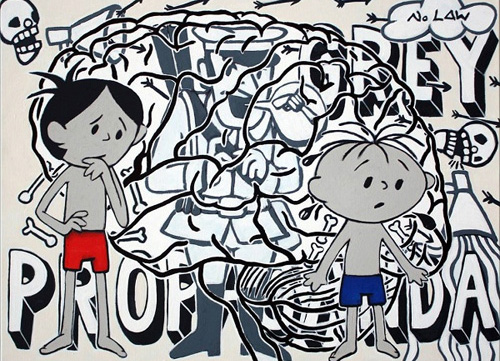 On February 14th, on Valentine's Day both in Kyiv and Munich an exhibition of a German artist Naomi Lawrence entitled "Guys, let's live friendly!", or "How gay is Batman?" held its opening. The exhibition was organized by KyivPride together with Munich pride within the framework of the Contact Group Munich Kiev Queer.

The opening ceremony took place in Kyiv Karas Gallery featuring Naomi Lawrence and in Munich Center for gays "Sub" featuring a representative of the Bavarian capital city council – Lydia Dietrich (Green Party). Two events were connected by video conference, and guests on both sides had an opportunity to be engaged in a lively dialogue during the whole event. Guests of the exhibition in Germany asked Ukrainians many questions, mostly – about the situation in the country.

The opening ceremony was attended by LGBT and human rights activists from UPO "Gay Alliance Ukraine", Heinrich B?ll Foundation, "Our world", "Insight", "Fulcrum" and others. The exhibition was also visited by the Team Leader of the HIV/AIDS Program in Ukraine of the Deutsche Gesellschaft f?r internationale Zusammenarbeit (GIZ) GmbH Dr. Martin Kade, who was very impressed by the works of Naomi and spoke of his plans to buy one or several of them for his personal collection. There were quite a lot people among visitors who have no relation to LGBT community, but have interest in contemporary art. The exhibition displays ten graphic works in which the artist plays with the images of a well-known comic book, cartoon and TV-show figures, offering to look at them from the different perspective and, probably, question their heteronormativity. The pictures represent both world famous characters, and more "local" heroes, popular mainly in the countries of the former Soviet Union.

– There is an impressive story behind every cartoon plot, – says Naomi Lawrence. – For example, well-known chipmunks Chip and Dale have long been a man and woman – up until Disney decided to make this childless couple brothers. It shows how randomly distributed the roles that basically form us and how exciting might be the perspective to change the existing situation and to become free of them.

–  I am very glad that such events happens, because the art is a way of communication addressed first of all to our emotional responses and experience rather than to intellectual – said in his speech Co-chairman of the KyivPride Organizing Committee, President of UPO "Gay Alliance Ukraine Taras Karasiichuk. – This exhibition gives us an opportunity to reconsider our common beliefs, reactions, stereotypes. It is an invitation to join the dialogue with no violence.

The exhibition Opening Program was completed by the semi-acoustic concert of the women's band from Munich "Queen Baba". Four girls surprised guests by performing the hit of Okean Elzy rock band "Vidpusty" (transl. – Let me go) in Ukrainian language.

The exhibition is open for everyone until February 21st in Kyiv Karas Gallery at Andriyivskyy Descent 22-а.