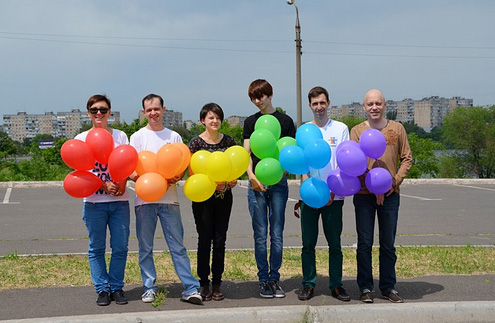 How we marked the Day Against Homophobia and Transphobia

On May 17 it was worldwide commemorated the 10th annual International Day Against Homophobia and Transphobia IDAHO.

This date is not chosen by chance: it is on May 17, 1990, the World Health Organization removed homosexuality from the list of mental disorders in the World Health Organization's International Classification of Diseases (ICD-10). In 2004 a French human rights activist Louis-Georges Tin made a proposal to commemorate this day at the international level in order to draw attention to the problems of the LGBT community.

It is not for the first time that IDAHO is being marked in Ukraine. In different cities around the country activists of UPO "Gay Alliance Ukraine" together with friends and allies held a number of events, including the rainbow flash mobs, film shows, discussion clubs and parties.

In Zhytomyr volunteers decorated the Suspension bridge in Gagarin Park with rainbow ribbons. Of course, the action couldn't miss the traditional letting go of colored balloons. The activists decorated the pavement with the inscriptions "Say no to homophobia!", and construction fencings – an excellent surface for graffiti – were painted with the slogans "Leave Homophobia in Soviet times!", "Zhytomyr Against Homophovia!" and "Homophobia is fascism!".

In Lviv was also held a rainbow flashmob: in the city center 30 flashlights, symbolizing the freedom, tolerance and mutual respect, were set free into the sky. The action was attended by people who came to support their relatives, friends and acquaintances. In the evening was organized the solidarity party, where participants could share their life stories with each other.

The activists in Kryvyi Rih handed out the information brochures with the narrative about human rights, tolerance and respect for minorities to the passers-by. The action was held in one of the most crowded places in the city – next to the biggest shopping mall. At the same place colored balloons linked to the rainbow flag were let go into the sky. The participants of the action were the volunteers of UPO "Gay Alliance Ukraine" together with the activists of MSM project "Friends" working under the support of the All-Ukrainian Network of People Living With HIV/AIDS.

In Odesa the weekend of tolerance started with the subbotnik in Starobazarny square, where the AIDS Memorial Alley is situated. Out there the activists planted flowers and set a monument to the people who died from the epidemic. According to the "Odessa-Media", this initiative was supported by 20 different organizations and establishments of the city.

In Odesa city center, on the Tyoschyn Bridge, also known as the "Mother-in-law Bridge", was conducted the annual rainbow flashmob. Especially for this occasion the railings of the bridge acquired colorful look due to the rainbow ribbons attached to them. Afterwards the colored balloons flew to the sky. 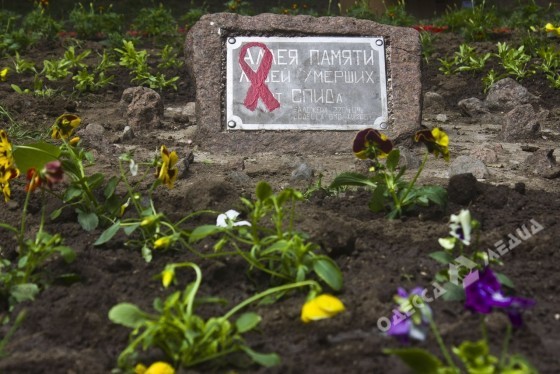 At the same time the members of the sports movement "LGBT bike club Odesa" made a bike ride at a distance of 50 kilometers: from Odessa railway station to the village Krasnoselka of Kominternovsky district and backwards.

The evening part of the program was no less eventful: all the indifferent people could watch the documentary film "Children-404" about the life of LGBT teenagers and participate in the workshop "Homophobia: history, statistics, consequences", which ended up with a lively discussion. The final chord of the day was the creation of a collage "Love against homophobia and transphobia".

During all weekends volunteers distributed informational materials on issues related to human rights violations to passers-by on the streets. "We are very happy that everything went without any incidents, and that Odesa once again confirmed its status as the most tolerant city in Ukraine. It was the first joint action of organizations representing the LGBT movement and, in our opinion, it was a very successful one", – summed up the founder of "Queer Home" Nina Verbitskaya and the coordinator of "ManFuls" Marjan Kavetsky.

You can view the photos capturing the best moments of the events on our website in the "Gallery" section ("Flashmobs on May 17, 2014 – International Day Against Homophobia and Transphobia IDAHO"). You can enlarge and scroll the illustrations by clicking. The gallery consists of two pages and we expect its replenishment.