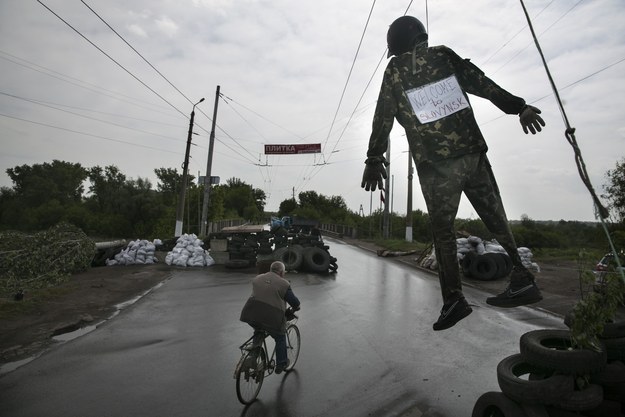 A figure hangs at a pro-Russia checkpoint near the town of Slovyansk in eastern Ukraine. Baz Ratner / Reuters

When pro-Russian separatists stopped Oksana, a lawyer who identifies as a lesbian transsexual woman, at a checkpoint in eastern Ukraine earlier this month, they pressed a gun to her head and called her “pedik,” a Russian word for “fag.” The next day, two people tried to attack her on the street.

Oksana, who is transitioning and taking hormones, is used to getting negative attention for her looks. But with armed, masked men patrolling the streets in her home region of Donetsk, she says being different now feels more dangerous than ever before. “In the last month I have heard more insults and threats about my appearance than in my entire previous life,” she told BuzzFeed by e-mail.

Ukraine’s conservative, industrial east has never been an easy place to be LGBT. In Soviet times, it was a crime. Today many there follow the resurgent Russian Orthodox Church, which condemns homosexuality. In the coal mines that drive the region’s failing economy, the worst insults are crude anti-gay slurs. And as eastern cities have slipped out of Kiev’s control and casualties mount, many LGBT people feel increasingly under threat.

“When local law enforcement bodies have stopped their work or gone over to the side of the separatists, local homophobes have worked their way in,” Oksana said. “We are afraid to speak to the police and we are afraid to leave the house, insofar as we may not return alive.”

Like many pro-Russian groups, Donetsk’s separatists see LGBT rights as fundamentally incompatible with a Slavic, Russian Orthodox worldview. At an April press conference, Denis Pushilin, the leader of the self-proclaimed Donetsk People’s Republic, told reporters, “I don’t have gay friends and I hope that I wouldn’t have.”

On May 11, the Donetsk and Lugansk regions voted for autonomy in flawed referenda denounced by Ukraine and Western governments. Pushilin’s self-styled republic has since appointed a cabinet, naming Russian political strategist Alexander Borodai its “prime minister.” Borodai has been linked to Konstantin Malofeev, a Russian businessman who funds anti-LGBT campaigns, and Borodai’s influence within the separatist movement appears to be growing.

The Donetsk People’s Republic has also adopted a “constitution” that criminalizes same-sex relationships. But Pushilin, Borodai and their men appear to have more pressing problems on the ground — deadly clashes with Ukrainian security forces, schisms between separatist groups, and a shadow war against pro-Kiev activists — that would trump active enforcement of the provision.

Early concerns that the region could adopt Russia’s “gay propaganda” law have faded as Russian President Vladimir Putin has cooled to the separatist movement. Ukraine’s parliament withdrew its own “propaganda” bill in April, though a similar measure remains under consideration.

Whichever government controls Donetsk, Oksana and her partner Angelia, who also identifies as lesbian and transsexual, want to leave. They’ve remained because they don’t know where they would go or how they would make ends meet. Oksana asked BuzzFeed to withhold her last name for fear of losing her job, where she still wears men’s clothing to adhere to the corporate dress code. Angelia, who says she cannot find work due to her appearance, stays at home with a gun for protection.

Maksym Kasianczuk, a sociologist with Donbass-SocProject, an LGBT research center in Mariupol, is also thinking about packing his bags. Despite the difficult climate for LGBT people in the east, until recently Kasianczuk saw some signs of hope — a number of local LGBT organizations, productive relationships with government agencies and a regular “LGBT Voices” section in the local Donbass News. Since the region spun into crisis, his work has ground to a halt. If Donetsk region separates from Ukraine, Kasianczuk believes the local LGBT community will go underground. “Only activists will be viewed as a threat — just like in Russia,” he wrote in an email.

While eastern Ukraine remains in flux, the security situation in Crimea is stable — and the threats to LGBT people follow a predictable pattern.

When the peninsula began falling to Russian forces in February, a small wave of LGBT activists fled for mainland Ukraine, fearing that Russia’s “propaganda” law would soon come into force. It did, when Russia formally absorbed Crimea in a largely unrecognized March referendum. And yet many activists there support the annexation, to the consternation of others.

“It’s a strange situation to me,” said Dmitry Pichakhchi, a project manager with Fulcrum, a Kiev-based LGBT organization. “On the one hand, they have stopped their activities, because everyone is afraid that according to the Russian laws it’s not allowed. But in Crimea, these same activists are really happy that Russia came.”

Kiev-based LGBT organizers cite internalized homophobia, a desire to fly under the radar, and the belief that Crimea is better off economically as part of Russia as possible reasons why. Some Crimean activists may not want to speak out against Russia for fear their communications are being monitored. Others, like many on the peninsula, identify as Russian and have strong historical and family ties to Russia.

“What do you want?” one Crimean LGBT activist wrote in response to an email requesting comment. “We’re doing great!!!”

Russia has waged an aggressive propaganda war in Crimea, which some activists fear will stir up anti-LGBT sentiment. Ukrainian television channels were blocked on the peninsula in March. But for many residents, the most pressing concern is the labyrinth of bureaucracy resulting from the changeover. After Russia annexed Crimea, Ukraine shut the water off.

“There are so many problems, there’s simply no time to worry about LGBT people,” Alexander, a 26-year-old gay man from Crimea, wrote in an email. (He asked BuzzFeed to withhold his last name because he is not out.)

“The Russian media is busy brainwashing Crimeans with lies and slander of the Kiev government and the rest of Ukraine,” he continued. “But nevertheless it’s a complicated situation and it’s not going to get easier.”

Whether they favor closer ties with Russia or with Europe, activists say LGBT people in eastern Ukraine and Crimea likely share a common fate — their personal lives will remain mostly underground.

“Given the current state of affairs in Crimea, it’s not likely that we will achieve some kind of tolerance for LGBT people from the occupying authorities,” Oleg, a pro-Ukraine LGBT activist there, told BuzzFeed via email. “Nobody entertains any kind of illusions about that.”

Armed men who attacked the Babylon Club in Donetsk, stated that there should be no gay clubs in the city