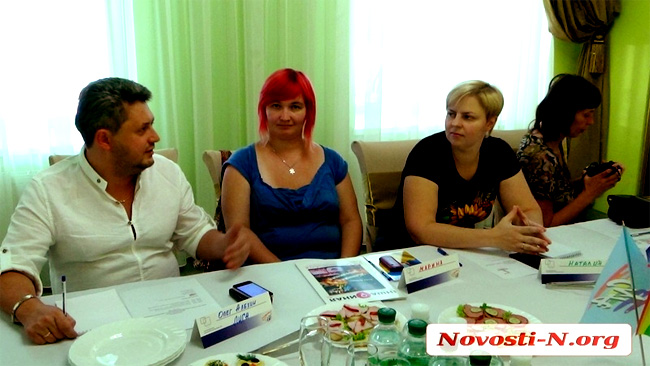 Black&Blue PR in Ukrainian style and Equality Days in Mykolayiv

In the last four years, after a period of relative quiet, LGBT topic has once again become popular. And in different cities of Ukraine every now and then take place related provocations specially designed for a negative perception.

It was told, among other things, by the chairman of the board of "League" Oleg Alyokhin during the roundtable dedicated to countering discrimination and violence in the Ukrainian society. The event took place on September 5 in Mykolaiv Business Complex Aleksandrovskiy.

Earlier black PR technologies related to the topic of LGBT were rarely used or were not used at all. However, since 2010 they have been reanimated and appeared even in Mykolaiv.

Surely Mykolaiv is a major regional center; however everyone's got used to this so-called "Black&Blue PR" being polished at the metropolitan area. It happened for many times in Kyiv, especially on the eve of still-not-signed Association Agreement with the EU by the runaway ex-President Viktor Yanukovych, when all kinds of Medvedchuks and other pro-Russian company scared Ukrainians with "Gayrope", mass legalization of gay marriages and daily gay parades on the streets of Ukrainian cities.

Many of our readers might still remember so-called "parade", organized by "gay-titushki" at Bessarabska Square during Maidan events. Later Gennady Moskal made a statement that "[people] shooting at the Maidan is the same people who organized fake gay parades".

During the roundtable Oleg Alyokhin reminded that throughout the election campaign one of the candidates for people's deputy, who was running in the district of Mykolaiv (was meant Olexander Zholobetskyi), around the city were hung billboards, on which the candidate appeared next to the costumed "as a gay" person on the background of rainbow symbolic. According to the inscription on the poster the candidate was supposedly largely supported by gays and lesbians.

Oleg Alyokhin at the Equality March during KyivPride2013. The inscription on the photo says: "LGBT rights – Human Rights"

According to the author of such "advertisement stuffing", it was supposed to negatively affect the rating of Zholobetskyi, since the attitude towards LGBT people in Ukraine, and especially in its regions, is incomparable to the Europenean's. In Germany or the USA such "black&blue" PR is pointless, as thence citizens clearly expressed their attitude on the issue: they do not care about the sexual orientation of the candidate. It is important for such a person to be a good one and the social and economical agenda he offers should be effective.

This was evident by the results of sociological surveys. Early as last year the majority of people in Germany indicated that they have nothing against gay chancellor. Only percent of respondents said that they didn't like the idea. 46 percent of them reported that the sexual orientation of the chancellor is out of their concerns and moreover 14 percent event found this idea to be "delightful". Let's not forget that Germany has already had a gay Vice-Chancellor – former Minister of Foreign Affairs Guido Westerwelle. As well as Klaus Wowereit who has been three times elected to the post of the Governing Mayor of Berlin and only recently reported of his resignation. As late as in January 2014 Barbara Hendricks made her coming out being at the post of German Environment Minister. And in March this year the homophobic Mayor of the city Wiesbaden Helmut M?ller lost the re-election to an open gay Sven Gerich.

Guido Westerwelle and Volodymyr Klychko at the Maidan

As an example of the American practice could be shown the attempt of the opponents to discredit Tammy Baldwin, a lesbian who ran for the Senate two years ago. Until that moment, Baldwin for many years had been working in the United States House of Representatives and declared her intention to become the first senator, who did not hide their homosexuality.

The Conservatives immediately made a tantrum in the press, having begun to frighten compatriots that "radical lesbian" continues to pave the road to power, that her election to the Senate would inevitably lead to "increasing of the level of child abuse, drug addiction and alcoholism, as well as violence and teenage promiscuity".
Do you think it had any impact on voters? Keeping in mind the achievements of Baldwin in the lower house of parliament – and she achieved quite a lot sitting in a chair of Congresswoman – Wisconsin residents, now represented by Tammy in the Congress, voted for her with no hesitations. As a result, she has made it and become the first in American history Senator, who makes no secret of their sexuality.

Ukraine is as far from all of it as a satellite of the Earth in a certain position thus let us come back to Mykolaiv where Oleg Alyokhin, summarizing the attempts to arrange a black&blue PR for candidate Zholobetskyi, noted that "many of us did not know him at all".

Even brighter than Mykolaiv and Kyiv shone Odesa, which is according to Alyokhin, has always had a special creativity. "In Odesa a certain group of people were costumed [as gays], and these "mummers" jumped near the office of one of the candidates. What has been done in Kyiv – an attempt of LGBT marches, I do not even know what is it, some kind of parody – it's a technology that had already been worked out in 2010 in Odessa. We just monitor it and have an understanding of what's going on and which way the wind blows. It is clear that there is "Ukrainian choice" – which is clearly is not Ukrainian, at least for me personally, and there are organizations that incite hatred and play with it, – gave an example the leader of Mykolaiv "League". – I'm just trying to coldly imagine what will happen during the election campaign this year".

On Saturday the "League" activists held a bicycle race in support of peace and unity in Ukraine under the slogan "We are equal, we are different, we are stronger together".

"Today the non-governmental organizations of Mykolaiv demonstrated its unity speaking for the independent and indivisible Ukraine. Now I am more confident that together we can build a new society in which there shall be no discrimination and violence", – explained Oleg Alyokhin.
The events took place under the mass human rights action "Days of Equality and Pride".