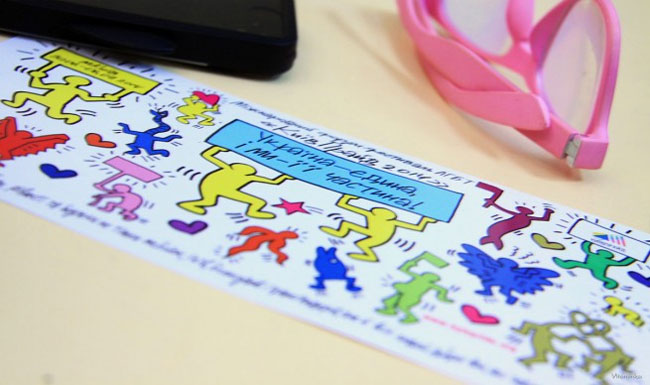 The inscription on the picture says: "Ukraine is united and we are a part of it!"

On the eve of New Year holidays, UPO "Gay Alliance Ukraine" sums up the year 2014. Now it is difficult to even imagine how much happened within the past 12 months. But what we know for sure is that during this time we became stronger. Only one year ago our organization acquired a new, spacious office and the possibility of doing what we really want. Now we have new friends and partners, new ideas and opportunities. It is too soon to speak about some global achievements, but there are no doubts we can share some of our results.

In the end of 2013 we launched information campaign "Promotion of basic human rights and freedoms and countering homophobia through increasing public awareness" in four Ukrainian cities – Odesa, Lviv, Zhytomyr and Kryvyi Rih. These activities brought together over 50 volunteers and activists who were involved in the street actions, social surveys and communication with journalists. In spite of workload of information space due to the Maidan related events, we received a number of positive feedbacks on our campaign in mass media. The project was implemented under the support of the office of the Ukrainian Parliament Commissioner for Human Rights.

The second phase of the public awareness campaign started in October 2014. During the planning phase were involved a lot of experts in the field of information technologies, PR and human rights.

In March together with our friends from organization MunichKievQueer we conducted study tour for volunteers in Munich introducing them to the activities of the German community groups. During six days six activists comprehend the wisdom of the organizational system of the LGBT movement in Germany. After the study tour four participants decided to get actively involved in the working activities of UPO "Gay Alliance Ukraine" and the other two now applies the knowledge they received in the other LGBT organizations of our country.

The largest event of the year certainly became an opening of the QueerHomes in Kyiv, Odesa, Zhytomyr and Kryvyi Rih. Before that we couldn't even dream of creating centers completely targeted at the needs of local queer community. Now when it happened we can see the results. Within one year QueerHomes were attended by more than one thousand participants, more than half of them became regular guests of its events and various activities. All the four QueerHomes have been actively supported by volunteers – there are about 60 people overall.  And this means that they are not only successfully conduct the activities, but also participate in street actions and are involved in the planning process of the centers.

In June Gay Alliance Ukraine organized Carpathians summer camp for activists and volunteers. Sixteen regional representatives of our organization for a week "experienced" themselves by the Carpathian Mountains and field conditions, at the same time learning all the intricacies of the leadership and self-motivation. All participants of the camp remained in contact with the GAU and continue to improve themselves now as LGBT activists.

The beginning of July – it is a hot time, and not just because of the weather. It was marked by pre-conference for young LGBT activists, National LGBT Conference, Pride Week and preparation of the Equality March – key points for the LGBT movement in Ukraine. To organize it the team of GAU worked together with wonderful partners, which allowed these events to become the most qualitative and productive.

In September a new interesting project was spontaneously born – GAYD! magazine. This entertainment guide tells clubbing people about the night life, fashion, style, recreation activities and the most important events in life of the LGBT community.

The First lesbian-feminist school in Autumn became a pleasant and useful pastime for interesting female trainers and talented female activists. The school aimed at strengthening the role of women in the LGBT movement in Ukraine. In order to reach it, it was planned to development the potential of the summer school participants. And today already we are happy to observe some practical results. A group of young girls united together to organize South Ukrainian feminist Union – together they are planning and implementing various activities. Today there are some feminists that are also part of the LB community among the visitors of QueerHome Odesa. QueerHome Kyiv introduced a new direction of work – Women's Club, which gather woman several times a month. Women who have not previously participated in the initiatives are now being gladly involved.

In the late Autumn UPO "Gay Alliance Ukraine" joined в the cultural life of the capital. We were the partners of the contests Miss Diva 2014 and Mr. IDOL-2014.  In addition, we helped in holding of The International film festival "Molodist" by being a partner of its queer movie section "Sunny Bunny".

We could not avoid telling about one more useful initiative of GAU, which proved to be an excellent practice from the first days of its implementation, – telephone hotline for LGBT, which has been already helping its callers. Starting from the 2nd of January 2015 the hotline will work from nine in the morning until one hour after the midnight. A new group of consultants have already been trained and ready to work.

The inscription on the picture says: "LGBT"

And, of course, it must be noted that this is the year when the website of our organization was transformed and became better not only visually. Now, thanks to it, you can learn even more about what is happening in Ukraine and abroad, find new initiatives of UPO "Gay Alliance Ukraine", follow the schedule of QueerHomes events, read interviews of interesting people, as well as publicistic materials and reflections.

We have already planned many interesting activities for the next year. All of our achievements belong not only to us, so we would like to heartily thank our dear partners and donors who supported us and of course all of you – our dear guests, readers, volunteers and those who care! We would not be able to make it without you!