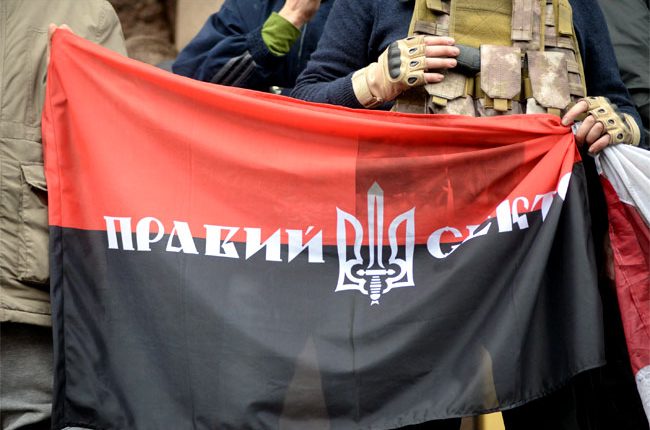 The inscription on the black&red flag says: "Right sector"

"For a long time Boryslav Bereza had been one of the speakers on behalf of "Right sector" movement. After being focused on his MP work, he moved away from the responsibilities related to the information policy of the movement". It was reported in a statement published on the official website of the "Right sector", which could not overcome the passing barrier at the early elections to the Verkhovna Rada of Ukraine. However, Bereza, as a representative of this military and political force of the extreme right, nationalistic orientation, became a deputy within majoritarian elections.

"As for today Mr. Boryslav Bereza no longer represents the "Right sector" in the Verkhovna Rada and is unaffiliated majoritarian MP having passed to the parliament as a self-promoted candidate, – reported at the official website of the party. – We ask journalists to take into account the above mentioned information and do not position Boryslav Bereza as a representative of the military and political movement "Right sector".

Bereza confirmed the information on his facebook page that he is no longer related to the activities of the "Right sector". "To avoid having answered these questions for a million times I officially notify the following: I am now focused on the MP's activities and I have no time left to be actively involved into information policy of the "Right sector". Therefore, after the negotiations with Dmitriy Yarosh, we made a joint decision that I would entirely dive into the legislative and political activities. Given that this activity takes all of my time, I am going away from the activity of the "Right sector". This does not prevent me from remaining friends and sworn brothers with Dmitriy, Andrij Tarasenko and others. All the rest remains unchanged. I haven't changed my principles and values".

The inscription on the picture says: "Topic: The activities of the "Right sector" during ATO"

Let us recall that Bereza was the only representative of the "Right sector" who had loyally spoken of LGBT, while this camp of the military and political force only voiced a variety of insults and threats against members of the queer community. Thus, in a recent statement of the "Right sector" was said that in the organization people clearly "distinguish those who are simply ill with homosexuality and internal enemy". By the internal enemies implied activists of LGBT movement and all the representatives of the community, who are not indifferent to the fate of their legal destiny in post-Maidan Ukraine. "Right Sector" will resist the work of the various destructive environments by using all of its structures. We always remember that we have front in the eastern part of our country, but also do not forget that there is one more internal front is opened against Ukraine!" – claimed the statement.

Bereza's position was incompatible with the above quoted, since in an interview to the American press(in which he deliberately emphasized that he is a Jew by ethnicity and religion), the MP said: "Infringement of the LGBT people rights, along with the Anti-Semitism, is a real and important problem, but I do not know any country where no homophobia existed. I do not know any country with no homophobes or xenophobes. Such people are everywhere. Personally, I have no further questions to the representatives of the LGBT community, and I think it's a matter of a personal freedom".