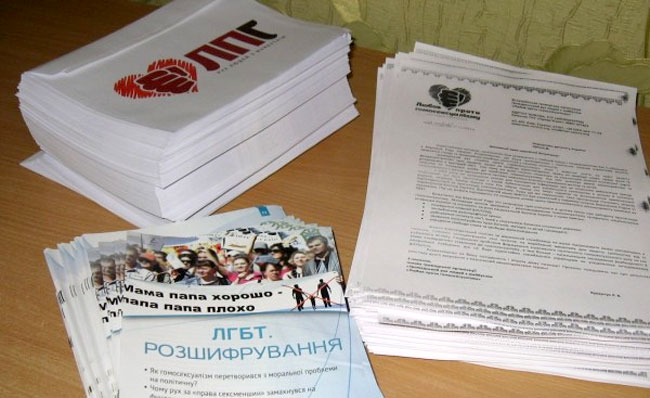 Well-known in Ukraine, however recently quite silent "Movement of people with a future "Love Against Homosexuality" (LAH) sent to each people's deputy of the Verkhovna Rada of Ukraine of the eighth convocation a letter of congratulations on the occasion of their election. The letters were also accompanied by a demand to vote for adoption of the draft law on banning "propaganda of homosexuality". It is reported at the official website of the organization that in addition to an appeal to the parliamentarians, each envelope was enclosed with "information and analytical material" – the brochure entitled "LGBT Decoded" (sounds almost like "The Matrix Reloaded").

"No responsible politician or public servant can support the demands of sexual minorities, but on the contrary should get focused on the elaboration of the mechanism to protect society from their destructive impact. Ignoring of the problem on forming of an aggressive political homosexual movement, the so-called "tolerant" attitude towards homosexuality, and furthermore – the forcible imposition of promiscuity and immoral behavior – all of it will be unanimously perceived by Ukrainians as a deliberate activities against the state. Counting on your solidarity and decisive effective position!" – was said in the letters.

LAH did not forget to remind the elected representatives about a hundred thousand of signatures in favor of a draft law on banning "homosexual propaganda", collected a few years ago. And also "about the causes of threats of propaganda of homosexuality to national security". Here, as usual, LAH holding forth about "spread of the HIV/AIDS epidemic, deepening demographic crisis and the destruction of the family institution".

But yet once again we would like to remind you about the official statistics, which is omitted by LAH, or even deliberately distorted providing with the false data, drawn "out of thin air". Nowadays the key reasons for the spread of HIV/AIDS in Ukraine remains injecting drugs usage and sex work. Gay Alliance Ukraine has already reported with references to experts that the share of MSM in the HIV epidemic in Ukraine is less than one percent. Even according to the most daring estimation, "homosexual way of HIV transmission" is not the one leading epidemics in our country.

Which exact draft laws on banning "propaganda of homosexuality" LAH demands to adopt is also a puzzle, since all the preexisting legislative initiatives on this issue, proposed by homophobic MPs of the previous convocation of the Verkhovna Rada, were removed from consideration of the parliament. Such draft laws are incompatible with declared by the country's new government policy aimed at European integration. If the LAH is not aware of it, then, the organization does not possess information, which should be a priority for its activities. If they know yet sending appeals and demands to the MPs to vote for non-existing draft law, then their actions is a populism designed for the uneducated citizens.