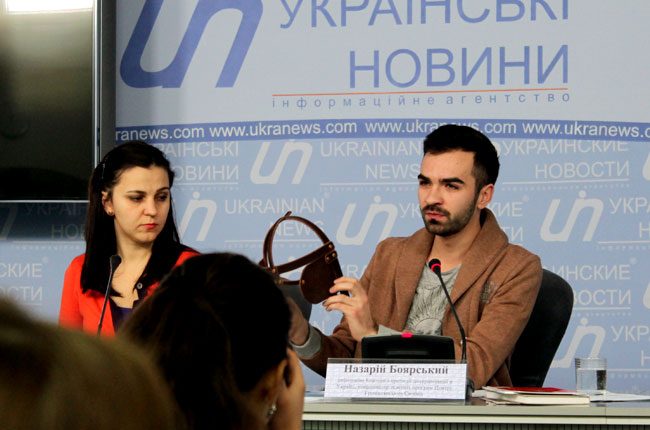 Today in Kyiv was held the anti-Award "The Discriminator of the Year-2014". Human rights activists from the Coalition against discrimination in Ukraine (CAD) named the most recalcitrant violators of principles of equality and non-discrimination in 2014.

The material embodiment of the anti-Award is the blinders – special plates, worn on the head of a horse, so they are unable to look around. It represents the symbol showing that laureates of the anti-Award through their actions demonstrate absolute blindness both in attitudes and deeds.

The anti-Award was presented in three nominations. The first one entitled – "My Tongue Is My Enemy", for the most discriminatory statement. The winner became the deputy of Kyiv City Council, former mayor of the capital Oleksandr Omelchenko, who said about people with disabilities the following: "And regarding these beneficiaries. Prepare a draft decision of the Kyiv City Council from January 1st, that there shall not be any benefits to anyone except for the disabled, poor little man, offended by God, blind, deaf and crooked…"

Arsen Avakov was really close to win in this nomination for his speech addressed to the Radical Party of Oleh Lyashko: "We'll join (the coalition) with all the … But only with democracy forces, not with queer ones".

Last year the winner in the nomination "My Tongue Is My Enemy" was the mayor of Yalta Sergei Ilash by comparing Roma people with the "little animals".

Last year winner in this nomination was abbot of the Kyiv Pechersk Lavra Monastery, Bishop Pavel and the President of the National Academy of Sciences Andrij Serdyuk, whose efforts "helped" to evict the Institute of Epidemiology and Infectious Diseases from the territory of Lavra. According to Tatiana Pechonchik, Chairperson of the Board, Information Center for Human Rights, it not only contributed to an additional deterioration in health of HIV-infected people, but also led to the death of several patients.

In the nomination "A discrimination in law" won the National Bank of Ukraine for the most dangerous and discriminatory initiative – for the decree dated November 3, 2014 №699 "On the application of certain rules of currency legislation during the temporary occupation regime in the free economic zone of "Crimea". According to this decree, residents of the Crimea were limited with the opportunity to use banking services. To all the people with a residence permit in the Crimea in their Ukrainian passports were applied the term of "non-resident" that in fact equates them to foreign citizens.

On December 16 the National Bank of Ukraine adopted another decree – № 810, however, according to Tatiana Pechonchik, an attempt to correct the situation with discrimination of the Crimean people led to new restrictions of their rights and the establishment of new commitments.

Last year, the first place in this nomination was awarded the then former MP from the former Party of Regions Vadym Kolesnichenko for his draft law "On the Prohibition of Propaganda of Homosexuality Aimed at Children".

Human rights defenders will give diplomas to the winners of the anti-Award, along with their blinders and some literature on human rights.

Nazariy Boyarsky, Co-Chair of the Coalition against discrimination in Ukraine (CAD), coordinator of educational programs of NGO "Center for Civil Liberties" told that many people suggested to choose as nominees Crimean authorities, DPR, LPR, Putin and other "heroes of our time". But after some discussions human rights defenders came to the conclusion that these nominees can be presented with all winning certificates at once.

Situation with human rights in the Crimea and in some regions of Eastern Ukraine – it is not just a case of discrimination, but rather a consistent policy. More details on human rights situation in these regions you may find in the appeal of Coalition regarding this issue.

The Coalition against discrimination in Ukraine (CAD) is all-Ukrainian non-governmental public human rights initiative organized in 2011. As of today it unites 50 civil society organizations. UPO "Gay Alliance Ukraine" has been a member of the Coalition starting from 2012.

The activities of CAD is aimed at ensuring the principle of civil equality for all people, regardless of certain social or individual characteristics, which are recognized in international, European and national law as such of need in protection from discrimination; elimination of discrimination from the public life.