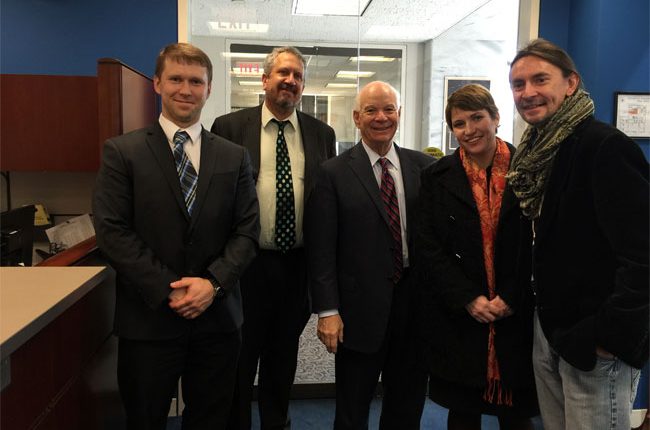 Activists of Spectrum Human Rights together with the representatives from the other human rights organizations, such as Magnitsky Act Initiative, held a meeting with US Senator Ben Cardin, a Democrat from Maryland.

The LGBT rights in Ukraine discussion revealed the urgent need to develop a consistent mass media policy aimed to inform and educate the general population on the LGBT issues and ultimately shift the overall mentality of the masses toward the changes with respect to the representatives of the queer community in a positive way. Activists marked the importance of reaching to the established European standards. Several media campaigns were suggested.

While discussing the LGBT rights in Russia the human rights activists encouraged the Senator to advocate further expansion of the Magnitsky List by adding the well-known Russian homophobic lawmaker and so-called "gay-fighter", Mr. Vitaly Milonov, who recently spearheaded a vicious attack  on the local gay club "Central Station" in St. Petersburg, Russia. Also, it was noted that Mr. Milonov is an active member of the "Donetsk National Republic", an infamous terrorist organization in Ukraine. It was suggested that the US Congress should officially designate "Donetsk National Republic" and "Lugansk National Republic" in a similar measure as done by the European Union.

Let us recall that after the attack of Milonov and Co on the "Central Station", Larry Poltavtsev, the head of Spectrum Human Rights, wrote on his facebook page: "An interesting fact … I had friends among owners / managers of some gay clubs in Russia. We even sometimes had been chatting online. However, after a while they left the circle of friends. They told me they were the patriots of Putin's regime. They even wrote respective posts about "grand" Olympics #CrimeaIsOurs and etc. I wonder, what do they feel right now? Have they already left to #CrimeaIsOurs? Or to Kolyma? Gulag 2.0 has just begun".