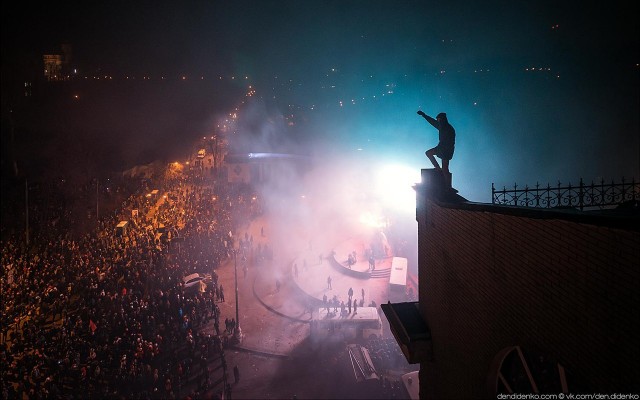 Recently I have come across an article, whose author bewailed that any gay activist has not been murdered in Ukraine since the beginning of the nineties and required a Harvey Milk for the Ukrainians. Ok, what do we know about Harvey Milk, except for that he was the first openly gay in the politics, a notable speaker, was shot in 1978, and Sean Penn played as Harvey Milk in an eponymous film?

If you do not want to read a big and a good article about Harvey Milk in Wikipedia, here is a short retelling.

A good boy Harvey Milk was born in a decent Jewish family in a small city in New York State. He studied mathematics in college, served aboard a submarine rescue ship as a diving officer in the United States Navy during the Korean War. After discharge from the army at the rank of lieutenant, junior grade Milk taught in a high school in New York, then worked for an insurance company.

Milk realized his homosexuality still in college, but he had been a closeted for a long time. He even intended to marry a lesbian friend. The next step in his career was a job of a researcher at the Wall Street investment firm. He was quite good in this field, even after he moved to San Francisco. A , he lost his job as a result of a protest. In 1970 Milk burned his Bank of America card after the US invasion of Cambodia.

The next two years Harvey Milk drifted from California to Texas and to New York, without a steady job or understanding what to do in the future. In New York he became involved with a theatre company. According to the people who knew him from the past, Milk changed a lot. In 1972 Milk opened a camera store on Castro Street in San Francisco with his last money. The last straw to push Milk into politics was a private business. Being indignant at the bureaucrats putting strain on a private business, Milk said later, «I finally reached the point where I knew I had to become involved or shut up». The beginning of Milk’s political career, who did not participate in a social life, got rather icy reception.

However, the interests of the inexperienced politician were not limited to LGBT rights. He advocated the reorganization of supervisor elections, reduction in corruption, legalization of soft drugs, and against state intervention in a private life of the citizens. Thanks to his charisma Milk earned almost 17000 votes during the 1973 election, coming in 1oth place out of 32 candidates. Nevertheless, adefeat at the election was not a reason for disappointment, and Milk did not give up his ambitions. Milk continued with a public activity and showed himself not only a good public speaker, but an excellent negotiator. He got the support of the trade unions and was much better prepared for the supervisor election than the previous time.

That time George Moscone was elected mayor. Milk supported him, and their cooperation continued despite Milk’s defeat at that election. Harvey Milk held public office no sooner than in 1976, when Mayor George Moscone appointed him to the Board of Permit Appeals, making him a city commissioner. So Milk became the first openly gay in the United States to have got such an appointment. However, the politician wanted more, and he resigned after five weeks from the Board of Permit Appeals. He was up to run for the California State Assembly.

The outing of Oliver Sipple, who saved the life of the US President Gerald Ford during an assassination attempt happened exactly at that time. When giving a speech, Harvey Milk declared, that the Vietnam War veteran Oliver Sipple was a gay, despite the latter was not willing to come out of the closet. Media spread the news, and the name of Milk was mentioned in a number of articles and news reports. Alas! It did not hand a victory in that election, but it costed Oliver Sipple his life, after having had a falling out with his family, he lost oneself into drinking and died at the age of 47.

After repeal of the civil rights ordinance which prohibited discrimination on the grounds of sexual orientation on the territory of  County, gays and lesbians of Castro came out in the street, shouting and chanting a slogan «Out of the bars and into the streets!» An impromptu demonstration gathered more than 3000 participants. 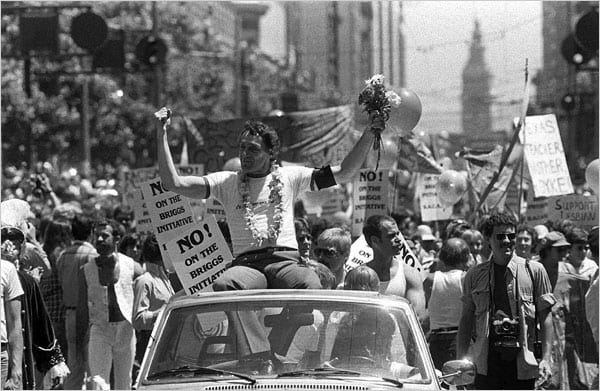 Harvey Milk won a seat as a city supervisor in 1977 by 30%, having outranked Rick Stokes, who also was an openly gay. His activity as a supervisor he started with an ordinance prohibiting discrimination on the grounds of sexual orientation. Again, the protection of gay rights did not become his sole political interest. The most popular ordinance to receive the largest support was «pooper scooper law». The ordinance required dog owners to scoop their dogs' feces. A TV spot with Milk stepping «by mistake» in the dog’s excrements while going for a walk in the city park, made national headlines.

There were around 250 000 or 375 000 (according to the different estimates) participants at San Francisco Gay Freedom Parade. The politician himself took part in the parade, he rode in an open car with a sign in his hands, in clear view and unguardedly. The assistant of Milk Anne Kronenberg remembers that she was really afraid for the life of her boss. But the latter answered that he could be shot any day, any minute, at any place, that is why she should stop worrying about that.

The murderer of Harvey Milk was of a supervisory council Dan White, a former fireman and police officer. White supported several initiatives of Milk, but later they fell out. It is difficult to say what the cause was. First White resigned, claiming that his salary of a public officer was not enough to support his family. Later, after having found financing sources, he wanted to be reinstated, but got a refusal. The day when Mayor had to announce the name of a new supervisor, Dan White entered City Hall and shot Mayor George Moscone and Harvey Milk. 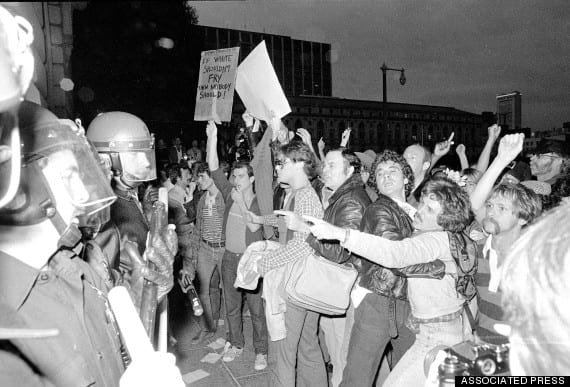 The jury, with gays and ethnic minorities excused from the jury pool, was sympathetic to White, and he received a lenient sentence: to serve seven years and eight months in a jail. One of the mitigating factors in the jury’s view was the fact that Dan White had a junk food binge the night before.

On the day, when the verdict was announced, a surge of Castro residents walked to City Hall seeking justice. These events became known as the White Night riots.
The murderer of Harvey Milk served only five years, and was released after that for the good behaviour. However, after a year and a half he committed suicide. The reason according to his defence attorney was family discord.

The contribution of Harvey Milk to the progress of civil and political life of the US cannot be argued, but it should not be overestimated. We do not know what he did reach if not the stupendous support of LGBT in his city.

Ok, let us return to our muttons, I mean to our country. For the beginning let us take for granted that LGBT is not better or worse than the heterosexual majority, they are a particular segment of society, corrected for the orientation. No more. So, the peculiarities of the Ukrainian mentality perfectly apply to LGBT as well.

The problem is that we cannot learn from our own history, even from the events, that happened beneath our eyes and with our involvement. After the Orange Revolution even the most active participants did not move their ass anymore, but just sat waiting for the president to make the life better. It did not happen. Not least because of the war some people did move their ass after the Revolution of Dignity, among them volunteers, citizen who cared. The messages are to hear that one should stay focused and control the processes and take part in these processes, or else we fool away this Maidan too. It is known that many LGBT were at theMaidan. Without rainbow flags, but quite openly. Guys, maybe it is time for all of us to understand that screaming ZRADA (betrayal) and not doing anything along with that to have PEREMOGA! (win) is a  road?

Nobody will come and make it better for you, and grant equal rights until you start to fight for them. Nobody ever granted any rights to anybody without fighting. Right now we have all preconditions not only for the «birth» of a new leader but also to move forward intensively.

But what should happen to kick start it?

Why are the gay clubs packed to capacity on the weekend, but there are only 4000 signatories to the petition to the president about protection of LGBT rights? Four thousand, Carl! Do we have only four thousand gays, lesbians, bisexuals and transgender, all put together? Is everybody OK with that beating a gay or transgender is qualified as hooliganism? Or does everybody like a perspective to be hired, when people at work get to hear about his sexual orientation? Does nobody need to have own rights protected? Or does everybody wait for the hero to come and save? Nobody will come and save, see both Maidans. Because nobody needs us, expect for ourselves and our nearest and dearest.

The peculiarity of our country and mentality is that changes start only when people are the driving force. Not one leader in a red cloak, but people. Again, see both Maidans.

Do not you mean that blood should flow to make us understand that keeping silence is not a solution? Why do fellows in the closets require actions from the organizations, but do not want to come and take part in the Equality March themselves? Do not they want to announce themselves to dismantle the stereotypes about LGBT in society?
In my turn I would like to quote Milk and remind, what he asked for, what he demanded, what he talked about:

«On this anniversary of Stonewall, I ask my gay sisters and brothers to make the commitment to fight. For themselves, for their freedom, for their country… We will not win our rights by staying quietly in our closets… We are coming out to fight the lies, the myths, the distortions. We are coming out to tell the truths about gays, for I am tired of the conspiracy of silence, so I’m going to talk about it. And I want you to talk about it. You must come out. Come out to your parents, your relatives! I know that it is hard and will hurt them but think about how they will hurt you in the voting booth! Come out to your relatives, come out to your friends, if indeed they are your friends. Come out to your neighbours, to your fellow workers, to the people who work where you eat and shop, come out only to the people you know, and who know you. Not to anyone else. But once and for all, break down the myths, destroy the lies and distortions. For your sake. For their sake».

Homosexual harassment in the workplace