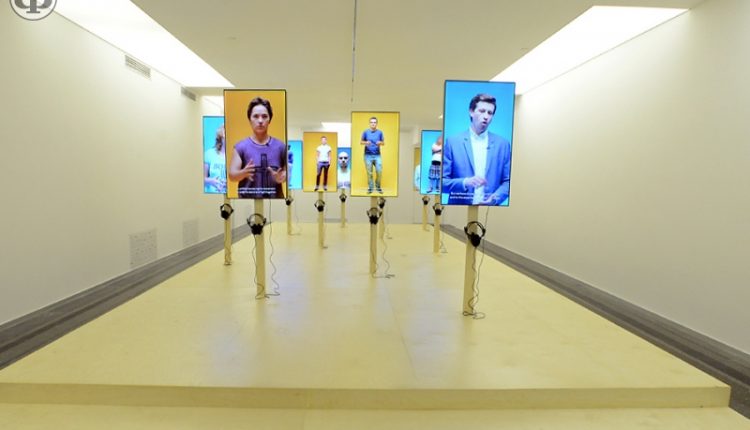 The exhibition «Patriots, citizens, lovers" by the artist Carlos Motta, one of the main prize winners of Future Generation Art Prize 2014, runs at PinchukArtCentre. This work is on together with his multimedia installation «We who feel differently» 2012.

Patriots. Citizens. Lovers… consists of ten screens, yellow and blue ones, showing interviews with the representatives of the Ukrainian LGBT community and with the activists, who discuss current problems of homosexuals during the military conflict. In particular, the question is about causes of homophobia, social assimilation or its lack, about the ways the state could find to solve the problems, having all necessary possibilities and leverage, but not doing that due to its own reasons. 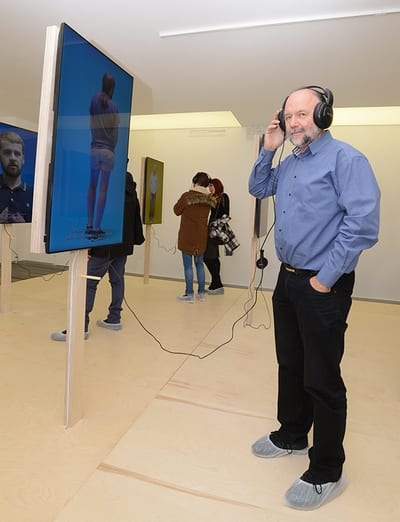 In my opinion, both expositions by Carlos Motta target mainly people with intelligence above the average, people who had little contact with the LGBT or just are not aware enough about state of affairs. You are asked to put on shoe covers before entering the first hall so that a bright rainbow carpet remains clean. I think this «precaution» is incredibly symbolic. 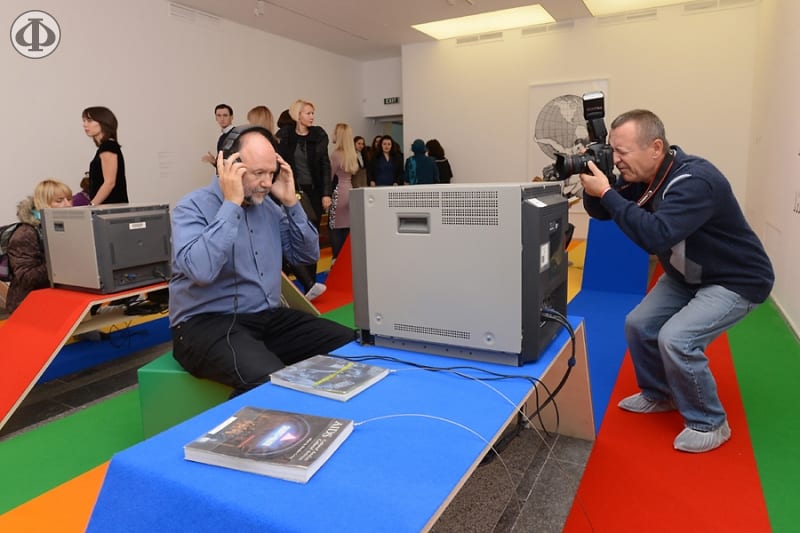 There are several old TV sets, headphones, books about LGBT attached by thin chains. American, Columbian, Norwegian and South Korean representatives of LGBT movement, queer scientists, activists, artists, lawyers and doctors tell from the screen about development of international gender politics for the past four years. There are documentary films and historical records, it is an exhibition and a manifest at the same time. There is a silhouette of a  young man on one wall holding a globe on his shoulders. He has a sad look. 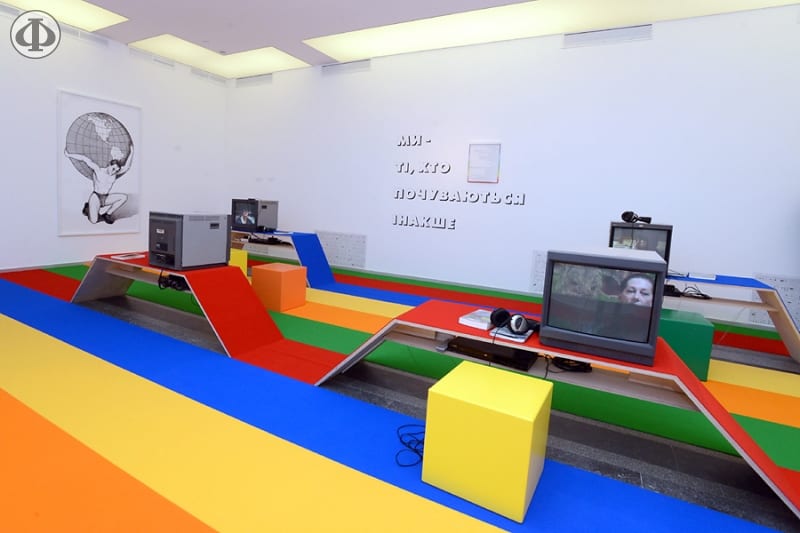 «Patriots. Citizens. Lovers…» One takes it as a part of this manifest, a local, a Ukrainian manifest with familiar faces and problems. Nobody attempts here to impress the audience with photos or video of the people who were beaten up only because they feel the other way. Obolonska Naberezhna, where Equality March 2015 walked through, is shown half empty, one can hear the fragments of  from the headphones mixed with the hubbub of the exhibition visitors: «Here… Equality March… radical…attacked a peaceful demonstration…»

The bus is gone. The things told by the activists do not seem shocking. But it matters when you understand that hatred, intolerance, readiness of the majority to chase all those who are «out of step» became a routine, an environment for you. And you look at it taking a defensive position before a wild and a full of horror understanding flits through your mind that it is not right, not right…

The exhibition by Carlos Motta opened together with a presentation of the works by 16 participants of the fourth competition for PinchukArtCentre Prize 2015. Partly therefore people who would not go to this exhibition especially, saw «Patriots». The photographers are taking enthusiastically pictures of the people, who are trying on headphones against the screens, where the discourse with the… activists repeats again and again? No. With the patriots, citizens, lovers.

My cautious attitude to contemporary or «actual» art traces the roots in the situation when professionalism, technique and general idea about the world history of art are often sacrificed to provocative behaviour. Just out of curiosity, however, I visited the exposition of the young artists, the PinchukArtCentre Prize contenders.

Some works left a bright impression, and they had something in common with the ideas of Carlos Motta.

A slide projection by Mykola Ridnyi is dedicated to Kharkiv.«Under Suspicion» is a series of slides which replace one another with a specific click. You can see ordinary places of Kharkiv on the picture, some elements are circled with a red marker, and there is a date to be seen here and there. One unwittingly perceives such pictures as a proof, the evidence of a crime. The viewer starts looking instinctively, what is wrong here, why the window is encircled, why these two people are connected by a line, what it means, what is behind all this… Fear creeps in being a nasty and sticky drop of sweat on the spine.

As a matter of fact, these red circles and lines are marked at random. It merely demonstrates that it is fear of the unknown, the fear that causes paranoia and aggression. 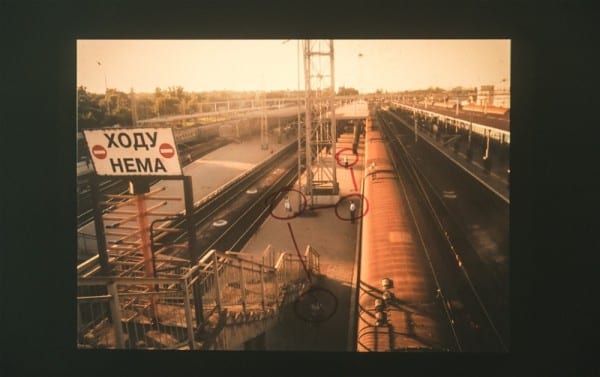 There is one more installation that captured my imagination. It is «Direct Influence Zone» bySergiyPetlyuk. There are four screens above. It seems the people on video are stepping from one screen to another, bending to the audience, and uttering together some popular stereotypes, judgements, «rules».

«Feminists are unhappy women who were not lucky with men.»

«You cannot get divorced, you should live for the sake of the children.»

«Gay and lesbians are a perversion of nature. It is better not to have anything to do with them.»

«Artists and poets cannot create for money. Only a starving artist can create a masterpiece.»

«Ukraine would live well if not for Jews and Russians.» 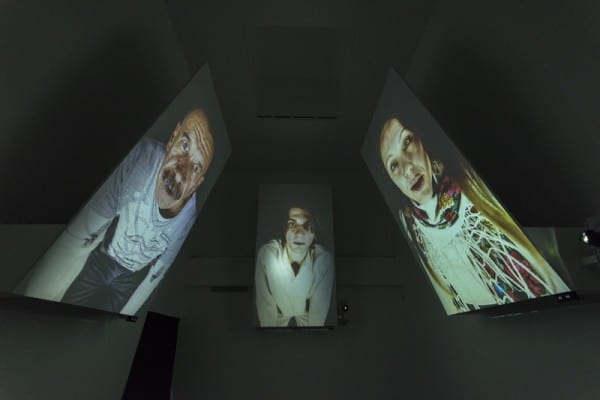 There are a lot of messages, sometimes they contradict oneanother, but they have one thing on common, namely, they have nothing to do with objective reality, although they are stated to be the ultimate truth.

Besides these two stunning works I liked to read the book by the Open Group «Exclusively for Internal Use», to stroll about «Blockade of Memories» and to try restoring «Order of Things». In brief, I was glad to soak up culture and was happy to see that at least art gravitates towards liberalism, the same cannot be said for political trends.