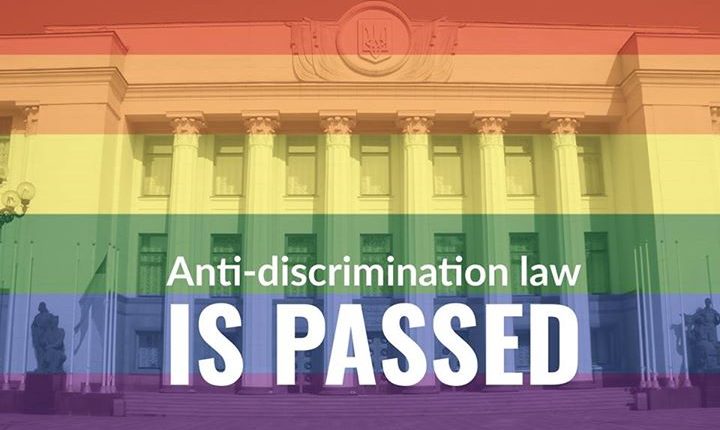 The law 3442 which prohibits discrimination on the grounds of sexual orientation and gender identity has been finally adopted. It is definitely good. At least because the clause is now included in our old Labour code, whichis much better than a new one.

In a few words, 3442 is about an amendment of the current Labour code which basically have remained unchanged since USSR. The left-wingers from EU countries were so envious about it because they had had a lot of union strikes, had put much pressure on their parliamentarians to get similar working conditions.

However, on Thursday a week ago the new draft Labour code was used as a basis, in which a non-discrimination clause was not included.

The time for the preparation to the second reading was extended, so far the law is being finalized now, but they will go back on it. When? Who knows? Taking into account that they have been working on it for some ten years already. Will a non-discrimination clause be included in the new labour code? It is also a question. But the ice broke up: the deputies have adopted the right law containing horrible words "sexual orientation and gender identity" being pushed by the Speaker of the Parliament, the EU, private interests in other fields, and the crowd with banners in front of the Verkhovna Rada. For the first time in the arena of our circus in Ukraine! Hip-hip-hurrah! 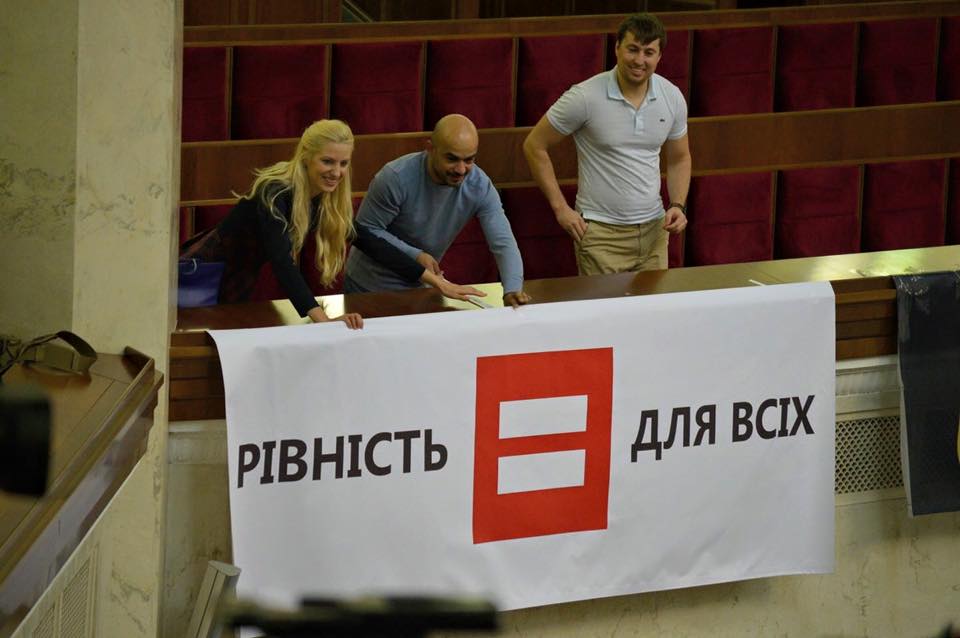 Ok, let us analyse the achievements and failures of last week brouhaha, and let us try to draw some conclusions.

1. They have rammed the law necessary for the liberalization of visa regime through the legislature. However, they have made it also difficult for themselves (for us as well) with the new labour code. Because it is not clear, whether this clause will be included in the new code, which has been taken as a basis, and now is being finalized.

There are two options.The new labour code will be adopted without a non-discrimination clause after the EU resumes, that the deputies have been good boys and girls and have done everything for the protection of the human rights. Or they will include the clause in the labour code, but it will not help much. According to the new labour code an employer has the right to dismiss employees because of a number of wacky reasons, for example, an employee refuses to undergo a health examination or for the disclosure of a commercial secret (for instance, salary). And the new labour code will be a serious blow to the trade unions. It threatens the rights of trade unions, making them no longer viable. Hopefully, the current code will be in use until there is a real alternative with all amendments. Everything is possible, one should wait and keep one's eye on the ball.

2. Voting for the non-discrimination clause showed who is who in the Ukrainian politics, who stands for the euro-integration, and who is haunted by the shared past. The results are frustrating. There are very few deputies, who were really in favour of the amendment, and anxious about the voting process. The majority voted for because PAP told, Groysman persuaded and surely, they adopted something in return, or promised to adopt. It means, the voice in this matter did not express personal ideas or ideas of the party, it was a standard unit of private interest, a bargaining chip.

3. All this reminds November 2013 in particular. That year we screamed "sign", and now "press the button". That time there was only one moron, now there are much more. That time the hope was closer, and nobody had any idea to what it could lead. Now the idea is there.

It is not about the non-discrimination clause. Of course, it is necessary is a mark on the door of an imaginary cave: "These people try to step into civilization, the reboot has begun, hold the line". It is not only about the non-discrimination clause. The point is that the mode of operation of the legislative authority has not changed, there are too many homo sovieticus in the parliament. And that is sad. 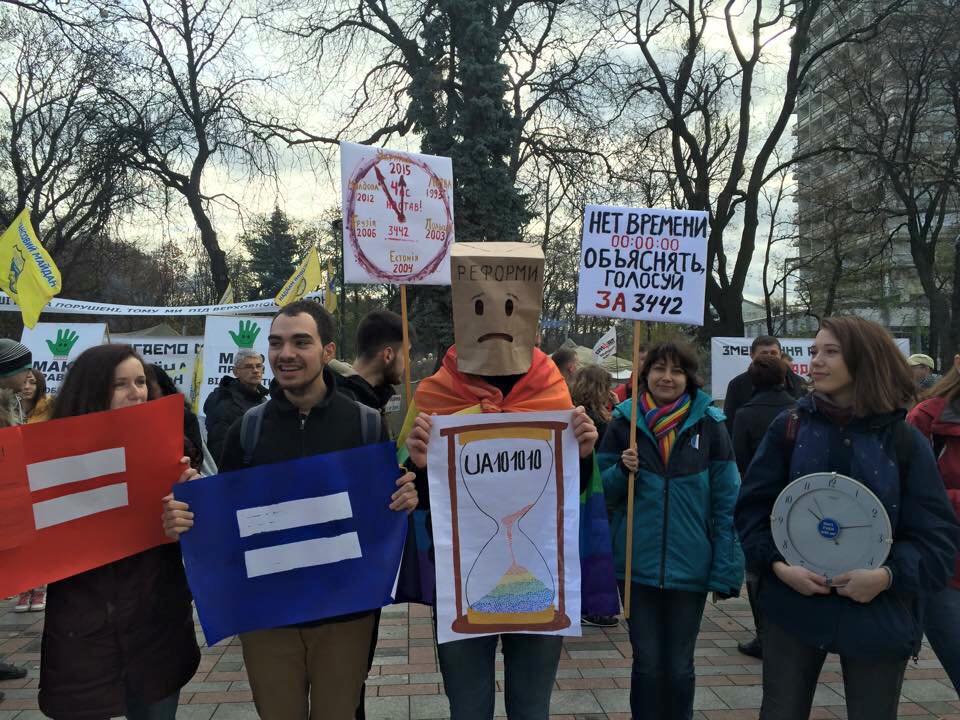 1. The deputies have voted for the inclusion of SOGI (sexual orientation and gender identity) in the anti-discrimination list of the Labour code. That is, orthodoxy did not crumble, there were no thunderclaps in the sky, and Jesus did not come to express personally his indignation after the voting. Altogether, the deputies successfully lived through their "first time", it will be easier next time, especially if not to forget about a lubricant.

2. LGBT came with rainbow symbols to the city centre to protect, and nobody has not been beaten up. It seems the level of radical homophobia is being overrated somehow. The majority of common people do not care after all, a part of the society, not big but active, supports the idea of gender equality, the primacy of human rights.

3. LGBT interacted with the public standing for common objectives. And again, there were no scandals. However, some smaller conflicts arose. Standing there under the rainbow umbrella with a rainbow poster personally I did not catch any side glance on me. I got sandwiches, these indispensable attributes of every peaceful protest in Ukraine, like everybody else.

4. And there is one more thing that happened largely in the minds of the activists. I consider it to be the most important – LGBT people refused to remain invisible. Two years ago there were basically no rainbow symbols at Maidan. This time despite firm recommendations from the organizers of the event, activists refused to back off and not to "provoke". There was a lot of rainbow in the sky over Verkhovna Rada, as well as new open faces, who were not afraid to introduce themselves, and to speak in front of the camera. I think, all this as well as "fatigue" because of being invisible is the best what the event brought. 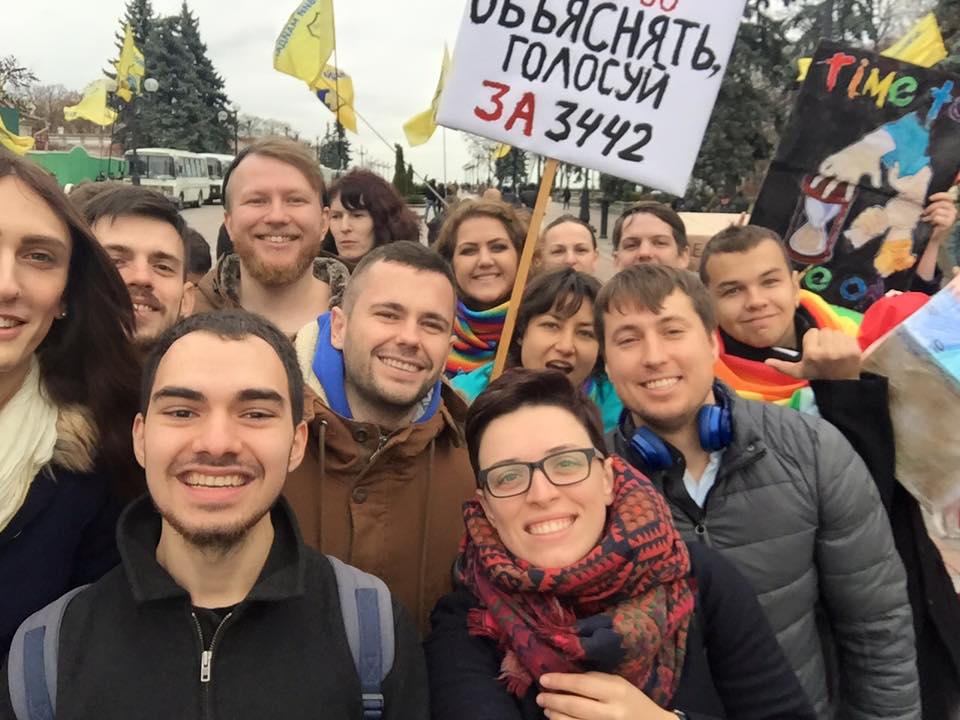 And a fly in the ointment for the last.

There were two illustrative moments to consider. The first one is a short discussion (around 400 comments) in the event group on the Facebook page about rainbow flags. A part of the participants suddenly slid into homophobia, even though it declared oneself "very tolerant". It is such a familiar situation when a tolerant attitude is inversely proportional to activism. I mean, while you are a "good black", you do not demand equal rights and are ready to keep your head down, they tolerate you. As soon as you take a flag, that is it, you are guilty, you have made all of us homophobic.

And the second moment. Tuesday evening. Our little group of LGBT activists from Gay Alliance Ukraine was still in front of the Rada. Some journalists were approaching, obviously with an intention to ask for comments, but a female organizer stopped them before they could even come closer. "Why are you filming them, but not us?!" she asked.After little bit arguing with a journalist, the camera was pointed at the person specified by the female organizer. And we?  We did not provoke, we continued to stand there. We do not mind, and a female journalist has a freedom to choose.But that distasteful remark about "you did not stand there" in the comments on the following day… But ok, we will keep that in mind, will remember, and next time come with a big group. And we will bring the flags.

And little bit to sweeten.

After all, the non-discrimination clause, mostly aimed at protecting the rights of LGBT has saved the country from the new labour code for a time. The new labour code provided for unpaid overtime work for single mothers and mothers of children with disabilities, allowed to install surveillance cameras to track employees without their knowledge, threatened trade unions rights, and allowed dismissal of employees for reasons not related to their qualification.

Well then, you did not know, but we are Batman! 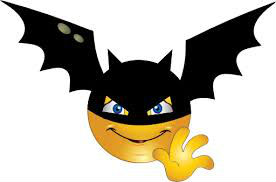 Thank you for your attention, to be continued.