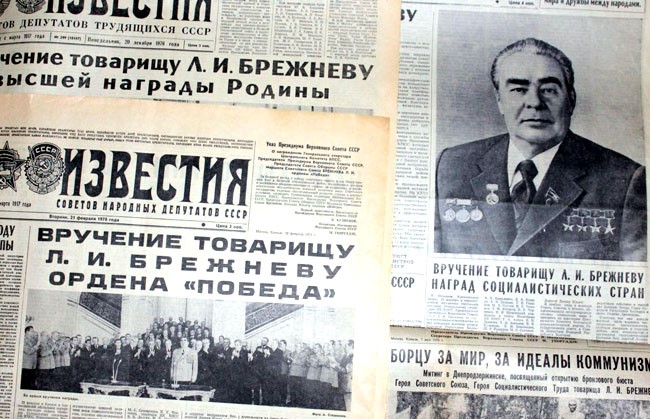 Last week Russian segment of Internet was full of “news” with intimidating headlines Brezhnev mass-media style: “USA puts a stake on LGBT movement: Russian opposition turned out not equal to its tasks” (source). Or “Rogozin and Gref were accused of homosexualism on demand of State Department of the USA” (source).

It turned out that these messages came from Izvestiia newspaper – it was first to publish the article about the horrors of State Dept. manipulating Russian people and ideologically scheming against the great state with the help of corrupt LGBT activists. 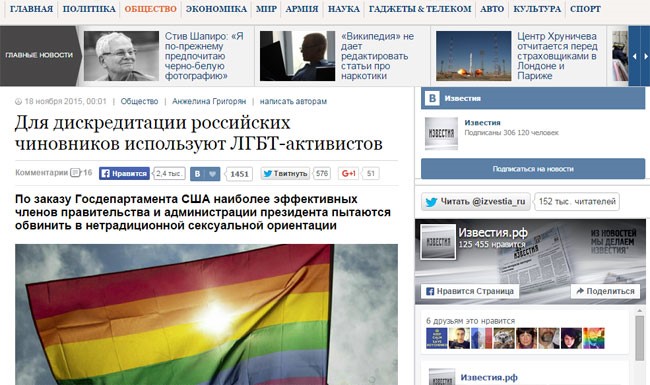 Headline: LGBT activists are used for defamation of Russian officials

However, some embarrassment happened after the letter had been published: the US Embassy in Russia interfered, finding a terrible lot of mistakes in the “letter” and recommending the editors of Izvestiia to hire a proofreader to prepare the fakes the way they wouldn’t look like fakes.

"Dear Izvestiia! When you use fake letters next time, you’d better send them to us, we will be glad to correct your mistakes. Sincerely yours, State Dept."

The US Embassy was wrong about the proofreader – Izvestiia needed an expert translator first of all. As for the rest, they were right. The letter published could not be written in State Department as it’s full of mistakes impossible for American officials. They include repeatedly omitted definite articles, misspelled names of state institutions titles and even the fact that LGBT abbreviation in official documents of State Department was replaced with LGBTI (lesbians, gays, bisexuals, transgender and intersexual people).

US Embassy employees were particularly puzzled with the fact that the letter that was supposed to be sent to Alexeev by State Dept., was sent from free e-mail on Gmail.

The articles that were published in Izvestiia on November 17 and 18 claimed that US State Department “increased funding for Russian LGBT activists” in recent months and that one of the main tasks given to gay community was “accusing the most efficient Russian officials in homosexualism.”

According to Slon online magazine, Izvestiia made reference to the correspondence of Nikolay Alexeev and State Dept. representatives that was allegedly intercepted by hackers. There was no direct link to that correspondence in the articles.

The newspaper also tellingly uses Alexeev for its fake as he is rather disreputable among Russian LGBT community members. Alexeev is far from being its leader, however, many consider him the celebrity of Russian gay-movement as he often appears in the media. It was recently reported that Nikolay Alexeev applied for Swiss citizenship.

If we assume that State Department indeed planned such intrigues regarding Russia, still it would hardly choose Nikolay Alexeev as the “agent” for its ideas, as Western LGBT community had long ago refused to cooperate with him because of his anti-Semitic views.

"How to say “жид” [kike] in English with all its meaning? Because American kike mafia don’t understand it".

And, as it appeared after Maydan, they are frankly anti-Ukrainian too.

"Got back from Crimea. They are 50 to 1 for Russia. Everybody hates Ukraine. They say that khokhly [offensive name for the Ukrainians in post-Soviet countries] had been raping them for 20 years. We were literally hugged [by people]"

Alexeev himself tells the following on his Facebook page

"My lawyers sent official request to Google regarding the e-mail that was supposedly used by me in this correspondence with US State Department. We would know who created this account, what IP address they had, when, etc. Izvestiia should pay for their words and not run scared…))"

The authors of Izvestiia articles recalled that more than a half year ago on the air of Moscow Echo radio station Nikolay Alexeev told that some high-ranking officials of Russian Federation were closeted gays, mentioning the head of Sberbank German Gref, Deputy Head of Presidential Executive Office Vyacheslav Volodin and CEO of Sheremetyevo airport Mikhail Vasilenko.

According to Medialeaks, the article of Izvestiia became hit topic on Twitter. One of the most popular versions was that through this article Vyacheslav Volodin confessed being gay because there was no timely reason for such publication and his assumed homosexuality in itself was not denied directly.

"I don’t know who Volodin is but it’s sad that he is not gay".

"NTV: You wouldn’t believe me but Volodin is not gay".