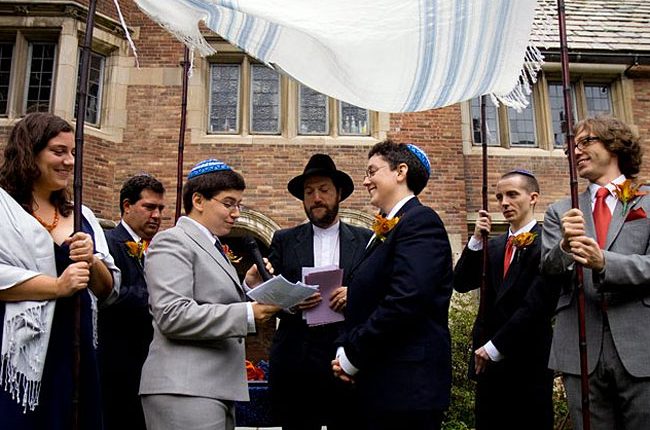 Lots of Jewish couples regardless of their sexual orientation and gender identity still want to marry according to the religious traditions in the company of their friends, family, the nearest and the dearest. Even if they don’t see themselves as people of faith and religion for them is rather connected with the cultural connotations. Such option is impossible for same-sex couples of Orthodox Judaism but more and more rabbis that are members of Conservative movement agree to perform wedding ceremonies for gays and lesbians. And they do it with pleasure, for example, in Los Angeles, “the city where something happens all the time” and which has a great variety of communities, religious, ethnical, etc.

In 2012 the chief rabbi of Beth Am synagogue Adam Clingfield wedded two Orthodox Jews and never refused this to other same-sex couples since that time. This year he told, discussing US Supreme Court decision to legalize same-sex marriages with Variety magazine: “I performed the ceremony for them because their rabbi would refuse to. They understood it, so they didn’t even ask him and he knew nothing of it. This is because Orthodox rabbis wouldn’t do such thing for two men, as well as some Conservative rabbis.” 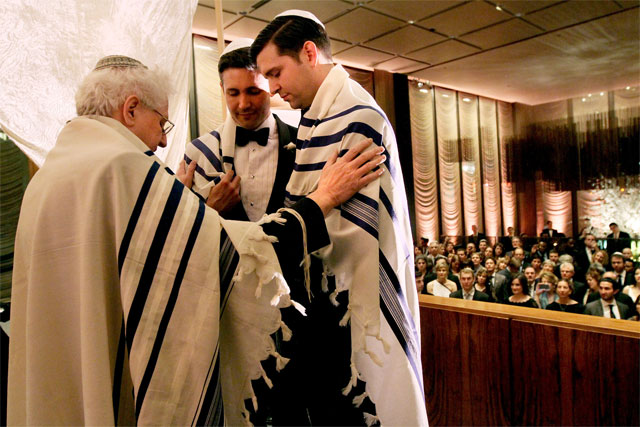 Clingfield talks of himself as of traditional Conservative Judaism adept who is glad to perform wedding ceremonies with all necessary rituals for same-sex couples. He believes that there is place for everyone in Jewish community. To the present day he recalls that wedding of 2012 with warmth as well as joy on the faces of people who consider Judaism their “sacred pillar of life.”

The ceremony was organized in compliance with all instructions: newlyweds were standing under the canopy (special wedding tent), signed ketubba (marriage contract that is the part of religious Jewish marriage since times immemorial). And, of course, both grooms shivered a wineglass with their heels after they emptied it.

A broken wineglass is one more must-have on a Jewish wedding that can be briefly described as some kind of amulet for luck. Though it has a lot of explanations in historical terms, including: “Breaking glass on the wedding derives from the sorrow of the Jewish people because of the destruction of the Temple and the sound of the debris should remind of the loss.” However, nobody talks of debris today because the glass is previously wrapped in a napkin, handkerchief or foil so that the broken glass wouldn’t hurt anyone. A groom traditionally would break a wineglass on a traditional Jewish wedding, but as this wedding was not traditional in the usual sense, each groom had his own wineglass. Two brides in case of a lesbian marriage also don’t neglect this ritual.

Orthodox Jewish tradition doesn’t accept same-sex marriages. Jews-Reformists, the religious movement quite popular in USA, performs wedding ceremonies for same-sex couples for a long time and their women can even become rabbis.  Speaking about Conservative Judaism, it is, with certain reservations, in between and gradually moving towards the acceptance of homosexual couples.

One of the members of progressive Judaism community rabbi Heather Miller is officially married to her spouse Melissa de la Rama. The women went through the “wedding process” three times. First in 2009 they had domestic partnership registered, because that was the only kind of alliance available for the same-sex couples in California. In 2012 they had religious wedding and on July 1, 2014 women finally were able to have legal marriage after USA Supreme Court canceled the prohibitive amendment that was in action in California.

“Me and my wife were always saying that we would be the last of that generation of American LGBT that would have several anniversaries of family life,” says Miller, the rabbi of Beth Chayim Chadashim synagogue (“house of new life” in Hebrew) founded in 1972 and being first LGBT synagogue in the world. “After the same-sex marriages are legalized, people will have a chance to have all wedding ceremonies in one day.” 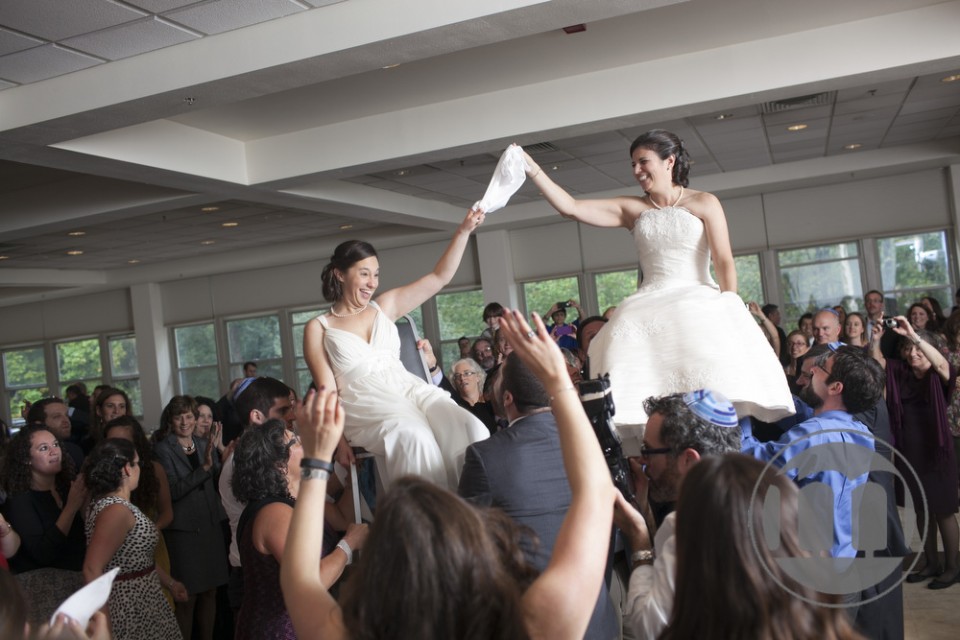 Heather Miller also told that in 2014 when she was waiting for the decision in the action of gay marriages legalization with other Californian gay couples, she accidentally overheard one couple talking of finding a rabbi who would agree to perform wedding ceremony for them. Heather “found herself” and did an improvised blessing for them right on the steps of the Court building

Read also: Coming out of the rabbi of the biggest synagogue of Washington (ru)

It is very strict in Israel – all marriage issues are under the jurisdiction of the rabbinate where the Orthodox movement rules and it is a trouble not only for homosexual couples that the rabbinate doesn’t see as potential future family at all. The power of rabbinate applies to couples where both partners are halachic Jews and the marriage can be concluded on the territory of the country through religious ceremony only. That is why even heterosexuals can’t marry in Israel if at least one of them is not halachic Jew (in simple words – Jew on the mother’s side). There are other conventionalities that make conclusion of marriage in Israel in frames of existing system of the rabbinate control impossible. 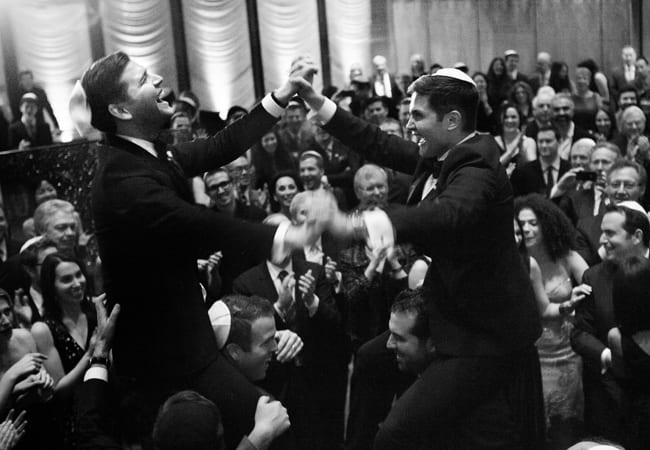 There is a simple solution: non-halachic couples can marry abroad, mostly in Cyprus or Czech Republic, and the state accepts such marriage in accordance with the secular law as any marriage concluded abroad, including same-sex one, though Israeli homosexual couples have had to go through lots of court instances to make it possible. For example Israeli vice consul of Mid-Atlantic region Elad Strohmaier is married. His longtime partner Oren Ben-Joseph became his husband in American Philadelphia and the civil ceremony was performed by city mayor Michael Natter.

Orthodox rabbinate ruling the marriage on the territory of Israel is the reason why unregistered concubinage accepted by the state is very popular kind of partnership in the country, including same-sex one.

Israeli legislation is very tolerant towards homosexuals and the movement supporting same-sex marriages is closely connected with the fight for the right to conclude secular, i.e. non-religious marriages in general. This idea is supported not only by numerous common citizens of the country but also by liberal Knesseth MPs (ru). However, fight for non-religious marriages in the state that was founded as “national home” of Jewish people that survived and preserved its national identity due to the religion can’t be easy. And this is the separate matter.

Campaign for acceptance of non-religious marriages including same-sex ones in Israel: We all are different and can’t fit in one narrow frame.