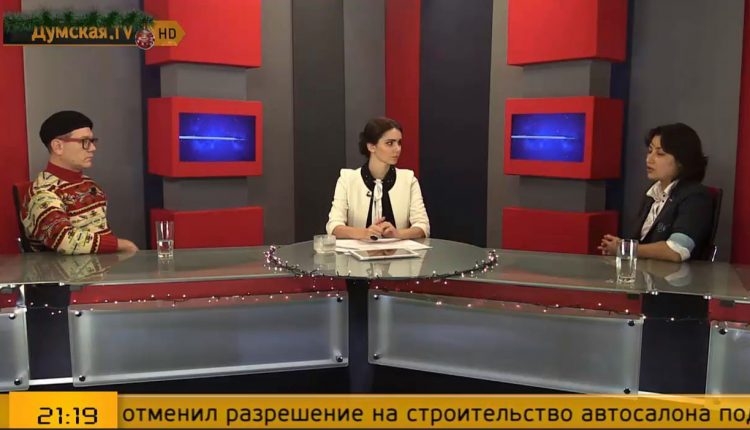 The year 2015 was reviewed in LIVE-studio of Odesa channel Dumska TV on Thursday with discussion over the most celebrated events including Odesa Pride.

The head of Odesa Pride organizing committee Anna Leonova and psychologist and vocalist of Circus band Serhiy Bakumenko participated in the discussion. Bakumenko told about his attitude towards LGBT before in LIVE-studio: he was not prejudiced against gays but uptight about gay parades.

According to Bakumenko, his attitude to public LGBT events hasn’t changed after Odesa Pride, he still considers them inappropriate. However he also doesn’t approve the actions of the police during Odesa Pride.

“We can’t say exactly what will be with the society. If gay culture wins, we will be the sexual minority. Gay culture advances,” Bakumenko thinks. “I’m sure that it is a powerful lobby with huge investments, it is paid to distract [people] from vital problems. Because old people are dying on the streets and suddenly gay culture must rise here and now.” During the discussion Bakumenko complained bitterly about gay prides leading to the decline in birth rate.

A woman from the audience that called to the studio told how the Equality March appeared to her. “People were awkward even to change clothes in front of mother before and now they would walk on the streets naked.” This is the way our society often sees the March for human rights and LGBT rights, believing that there will be “men in feathers and necklets” on the streets.

“When people go through some social troubles they always look for someone to become the explanation of these problems. The history of humanity knew [periods] when Jews were blamed for everything. It seemed that now it’s easier to blame gays. This is desire to make somebody else responsible for the problems,” Anna Leonova answered the question about the reasons of the society’s aggression.

She also mentioned that teenagers suffered because they lacked knowledge about homosexuality. In Odesa region parents took a boy to psychotherapist when they learnt that he liked boys. The psychotherapist assured them that a guy needed medication. “Such practice was in general abolished in the end of 1980s. Very often such treatment turns a person into “cabbage”,” Anna points out.

Let’s recall that despite all the troubles and obstacles from the authorities in having Odesa Pride 2015 the organizers intend to have the festival in 2016. Currently the organizing committee of Odesa Pride 2016 is forming.