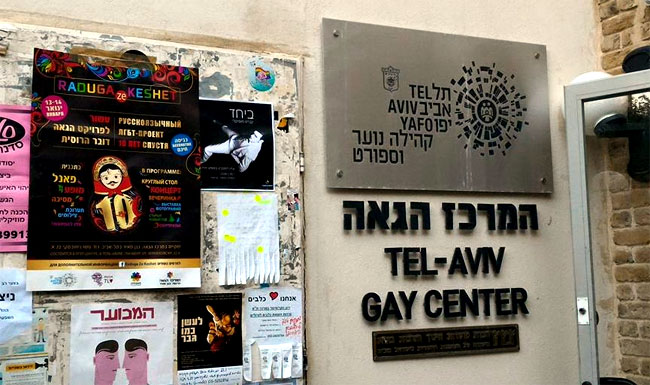 On January 13-14, the events, dedicated to the 10th anniversary of the Russian-speaking Israel LGBT project, took place in the public municipal gay centre of Tel-Aviv.

Israel is a country with the biggest Russian-speaking community outside the countries of the former Soviet Union. This fact doesn’t need to be explained to anybody who remembers how many Jews and their relatives repatriated to Israel in the 1990s. This process is ongoing, and recently so-called “aliyah” (in this case this term means the number of people who decided to repatriate) has increased significantly, especially from Ukraine and Russia. The reasons are obvious: repressive policies in Russia, social and economic instability, an occupation and war on the Ukrainian territory. 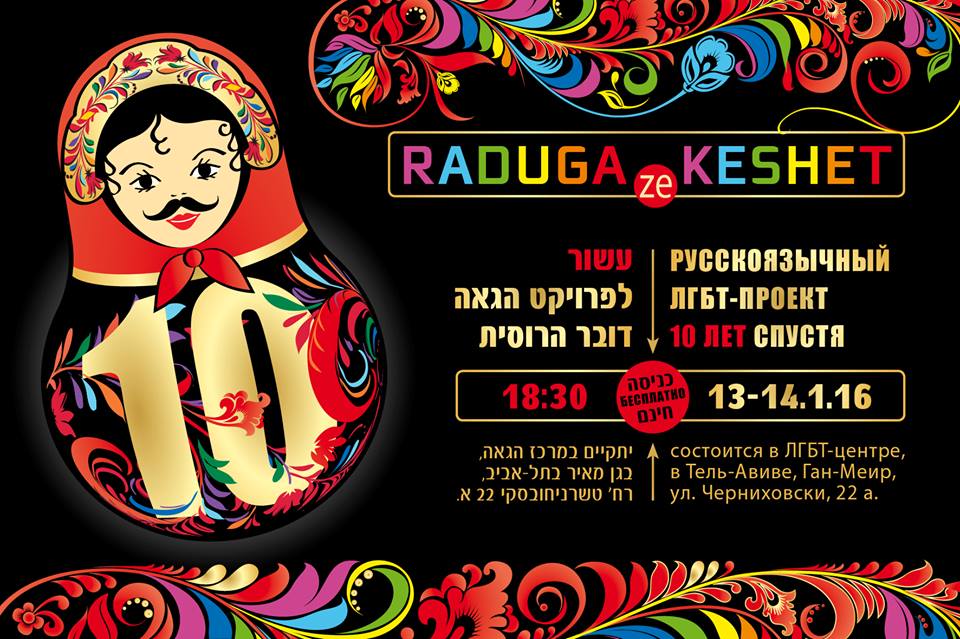 Hardly anyone collects a separate statistic related to LGBT, but it has already been 20 years since the “big aliyah from the Soviet Union”. During this time Russian-speaking gays and lesbians of Israel came together and showed themselves to be LGBT in Russian-speaking community and Russian-speaking people in the queer community. “We took our first steps still at the time when one could meet an announcement on an Israeli lesbian dating site: “Russian-speaking visitors are requested not to contact, please”, tells Anna Talisman, one of the veterans of the Russian-speaking Israeli queer movement. 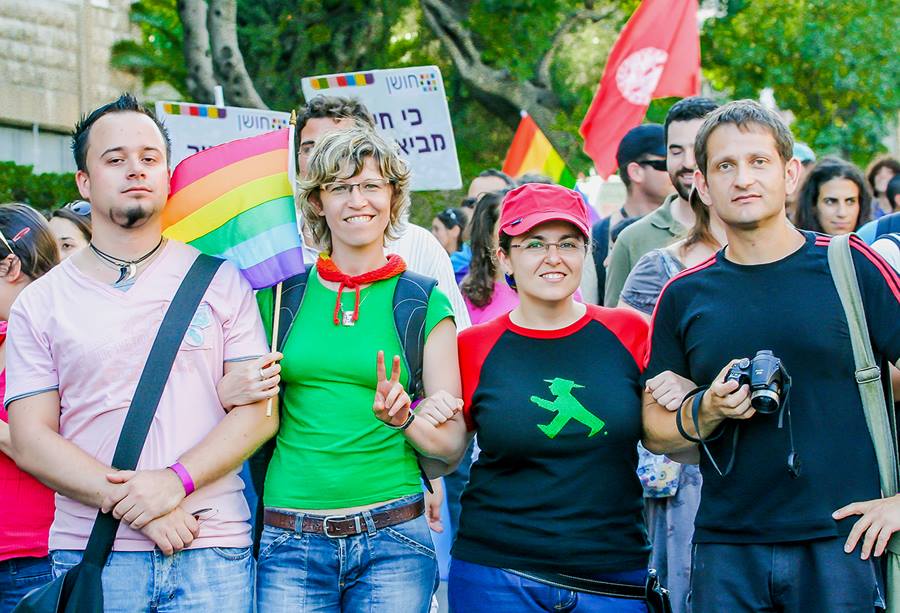 Russian-speaking Israeli at Pride in Tel-Aviv, 2008 (source of the picture: Gai Frankovich)

A good while Russian-speaking LGBT people have been the representatives of a “double minority” in Israel. But the more LGBT people, more occasions and opportunities appeared in order to come together, to create teams to work and fight together, to exchange experience, to support each other and to rest. One of the first team organized by Israeli lesbians was The Girls. The team keeps successfully working. Other projects appeared later. All these activities enjoyed success and resulted in a 2-day celebration named “«Радуга зе кешет» — Rainbow is Keshet (“keshet“means rainbow in Hebrew). 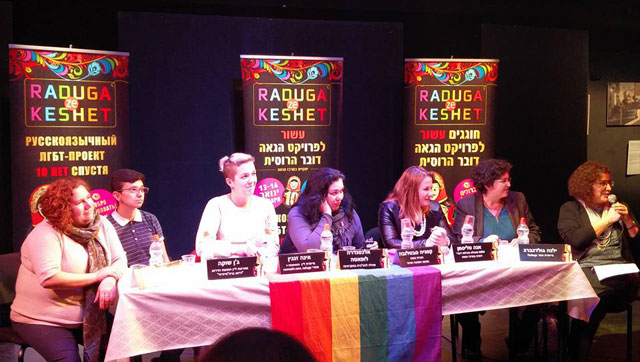 On January 13 a round table was held in the gay centre of Tel-Aviv, where the Russian-speaking LGBT community meets every Wednesday. It was attended by the veterans of the movement, people who can be called the representatives of different identities within the Russian-speaking LGBT community, as well as by Ksenia Svetlova, the member of the Knesset.

Ksenia Svetlova is the representative of the political bloc Zionist Union, the second largest faction in the current parliament. She repatriated to Israel from Moscow at the age of 14. Svetlova is one of the most LGBT-friendly politicians in the country, who also promotes the interests of the Russian-speaking community. During the meeting with the guests Ksenia addressed a lot of issues which are at the intersection of the very same “different identities”, many people are familiar with, including representatives of the queer community.

Anna Talisman, Inna Zengina and Elena Goldenberg told about the work done by the Russian-speaking LGBT activists in the past 10 years, for example, the creation of the website Rainbow. The website not only united Russian-speaking gays and lesbians, but also became kind of voice of the community outside Israel, through which people from other countries got to know what was happening in Israel.

Another participant in the round table, Nadya Eisner shared her story – a mother of five children, a feminist, a lesbian, and a Russian-speaking woman in the Israeli faith community. Jenn (Zhenia) Shhuka talked as a representative of so-called “1.5 generation”. They are the children of the repatriates from the former Soviet Union, who immigrated to the country at an early age. So, their life is tied to this country, in which they grew up, went to school and university, served in the army. However, a lot of them maintain a strong connection to their country of origin, while their mind-set is much closer to the “sabra”, i.e. Israeli Jew born in Israel. 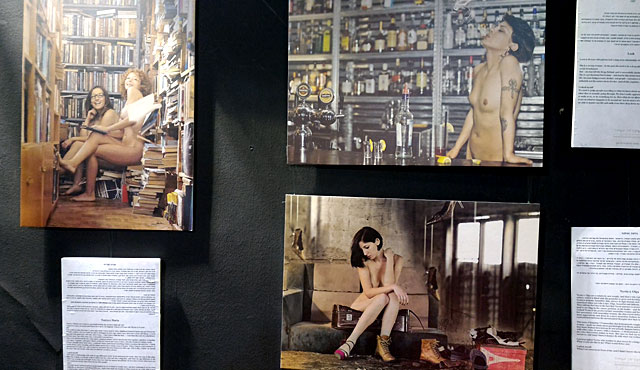 Exhibition of the photographer Natasha Kuperman

Oleksandra Lopata, who participated in the round table as well, spoke on behalf of the new repatriates. Many years she was part of the Ukrainian LGBT movement and since recently has been living in Israel. She talked about the problems which LGBT, who came to Israel or just think to come, can face, particularly, the legalization of one’s partner who does not have the right to immigrate according to the Law of Return. Furthermore, Oleksandra told what was happening the other day in the countries of the former Soviet Union, which are countries of origin for most Russian-speaking Israeli. She compared the situation of gay rights in Russia and Ukraine – the countries bound by a common history but with different vectors of development.

Rainbow is Keshet became a limelight event attended not only by many representatives of the Russian-speaking queer community, but also by many Hebrew-speaking gays and lesbians. The organizers provided a simultaneous interpreting, so everybody could participate in discussions and communicate. The attendees could enjoy the works by the photographer Natasha Kuperman, who presented the pictures of Russian-speaking queer women living in Israel.

We are going to keep you updated on the activities of the Russian-speaking LGBT activists in Israel and to provide more details about the life of its queer community.