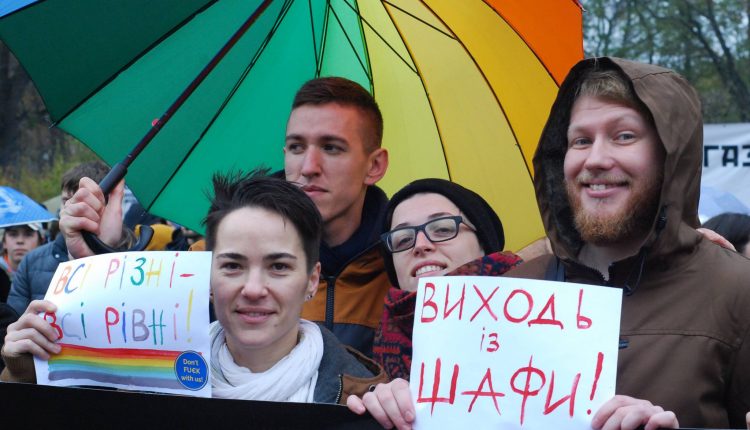 On January 22, the Reunion Day, there will be trial of pseudo-patriots: LGBT organizations demand just punishment for attacks on the Equality March in 2015.

The trial of the group of radicals accused of the attacks on peaceful Equality March that took place in Kyiv on June 6 last year under the slogans of human rights protection for LGBT and of aggression towards the law enforcers who were on duty in Obolon district of Kyiv at the time was planned to take place on January 22.

The accused are young men connected with Right Sector: Olexii Protokovylo (26 y.o.), Danylo Dashevskyi (41 y.o.), Kyrylo Viliamovskyi (21 y.o.) and Vitalii Kyrylchuk (38 y.o.). The investigation was carried out according to the Hooliganism article of the Criminal Code, though the attackers were obviously acting because of fierce hatred of homosexual and transgender people.

Ukrainian LGBT organizations point out that the crimes those young men are accused of, are based on homophobia and transphobia. Unfortunately, the Criminal Code of Ukraine that is dated back to the Soviet times recognizes only three hatred motives – race, nation and religion. Times have changed and now people are attacked and sometimes even killed because they have different sexual orientation or gender identity.

We urge the court to recognize the motives of homophobia and transphobia as it will be just recognition of sad Ukrainian reality. Unfortunately, Ukrainian court had considered homophobia as a mitigating circumstance before, not as a factor that should aggravate the guilt and the punishment.

We urge Ukrainian Themis to ratify inevitable punishment for hate crimes as they are more dangerous for the society than common hooliganism, because they threaten any person that is different from the others and dares to show their individuality and live according to their preferences that are no ones business.

Any violence that is committed because of some people’s hate towards other people is deeply immoral and contradicts Christian ethics as well as modern one, undermines that solidity that all of us, citizens of Ukraine, should keep to in the times of ordeal for our country.

In order to back our words with deeds, we organize a peaceful picket in the day of the trial, demanding public and transparent proceedings of this notable case. We are far from desire to get the most severe punishment for the attackers, on the contrary we urge the court to be more compassionate in the sentence, if it recognizes hate crimes in general and homophobia and transphobia based crimes in particular significantly dangerous for the society.

Right Sector also plans picketing the court as they consider their members persecuted for political reasons. We underline that attacks on peaceful demonstrations are crimes that have nothing to do with defending one’s beliefs, because beliefs are the product of mind and should be defended with the help of mind and not with explosives or cold steel. Attacking peaceful demonstrations is for people who are glad to throw Ukraine into the abyss of civil confrontation, who feel at home in civil disorder and replace discussions with their fists and feet. So the punishment for such crimes has nothing to do with political persecutions.

We remind that Right Sector was responsible politically for its supporters attacking the Equality March last year, because its leaders warned (ru) the organizers and the general public on the eve of the event. “We will do everything so that the people not allow this parade happen at the end of the day,” said Vasyl Malkovych aka Khorvat, commander of the 13th battalion of Right Sector on June 1, 2015.

We believe that attempts of the accused to hide behind the patriotism, participation in the Revolution of Dignity, self-sacrifice on Maydan and struggle against the invaders and terrorists are shameful. There is no honor and no dignity in performing acts of terror to your own fellow citizens on the peaceful streets of the capital while participating in antiterrorist operation.

We are sure that punishing those who attacked the IV Equality March of 2015 will be the best sign of unacceptability of hate crimes to LGBT that the state can give. Impunity will lead only to new attacks and more violence.

NOTE: the trial is to begin at 11 a.m. on January 22, Friday, in the court of Obolon district of Kyiv, 2-e Marshala Tymoshenka str.