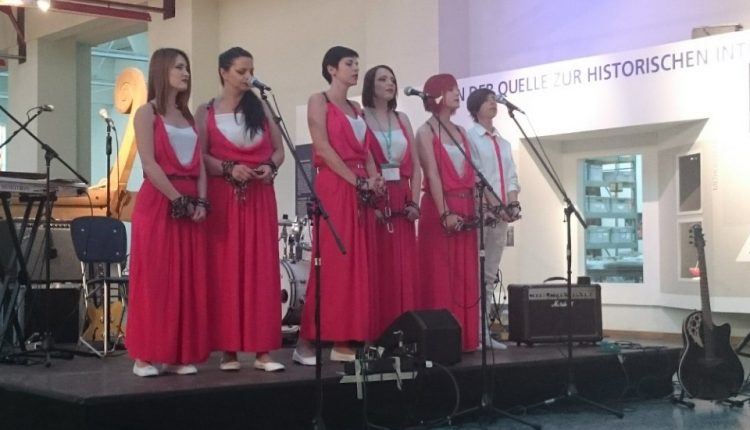 The first Ukrainian LGBT chorus is one of the most successful projects of the Queer Home volunteers. The chorus Qwerty Queer led by Olga Rubtsova was founded a year ago. The chorus has been already at the festival Queertakte in Mainz. It has received the invitations to perform at the festivals of the LGBR choruses in 2016 and 2018. Olga shared the history of the creation of Qwerty Queer and the plans about a new Ukrainian project.

How was the idea to create an LGBT chorus born?

We got the idea from the Germans during their visit to Odesa. They gave master classes and asked whether we had something similar. The phenomenon of a chorus hasn’t been supported in the post-Soviet space anymore. But it is not the case in Europe.

To begin with, a chorus is a team, a reliable machine, which operates even though one volunteer can’t come. The more people are in the team, the more powerful and impressive the chorus is. People in Europe understand that. There are massive choruses there. When they start to sing their power gets you. Many choruses are 20-25 years old. There are no nascent choruses. As a rule, singers integrate into the existing choruses. The generations change, young people join a chorus and suggest to sing something different, more lively, more modern.

What does your chorus perform?

We started with a song which touched us – the song by Mara “Golovokruzhenie”. Later we started to work on modern hit songs. I don’t like easy tasks. As soon as the men joined the chorus, we started to work on rather a difficult song – Aha! by Pentatonix. Four voices, there are only a few moments, which repeat.

How difficult was it to find the people ready to sing in an LGBT chorus?

It was difficult. We are all people, different personalities with our own ideas about a chorus. Someone understands that chorus means a team. Someone thinks he is worth much more than, for example, to be in the third row left.

Does it take you much time working with the chorus?

We have open rehearsals every week. Besides, I dedicate at least two days to the additional work on the voice parts. Given the work, the schedule is very busy. But I don’t mind. What matters is a result.

Yes, we have recorded the first song, the one we performed in the festival in Mainz. We have made a cover of the Mara’s song “Golovokruzhenie”. Some specialists helped us to make the arrangement of the voice parts. Some composers helped us with the accompaniment. And finally, we recorded the song in my friend’s studio. By the way, it was very interesting for him to work with us.

Is it all as a volunteer?

Entirely. Everyone, who helped us, was very interested in it. For example, it was very interesting to record the music for the person, who is basically involved in rock music and the symphony orchestra.

The song is political. We wanted to capture the audience somehow, to engage it. After the performance in Mainz, some of us stepped over some obstacle and understood that somebody heard us. Moreover, they want to hear us. While singing, there was a feeling that each listener is captured. It was Germany, where our group had manifested itself – a friendly environment, an emotional outburst. We didn’t have time for the rehearsals, but we ad-libbed and arranged the song for three voices.

Is it true that you plan to collect the singers for the national LGBT chorus?

Yes, we plan to form a big chorus. I understand, there is a problem at the moment – we can’t form a chorus in each city. There are not always musician friends, who can help. And there is not always the organizer, who is ready to contribute enough time. Our big idea is to bring together the people from different cities and to provide them with basic knowledge. Sooner or later the people will be aware of their development. And then, maybe, they want to create something their own.