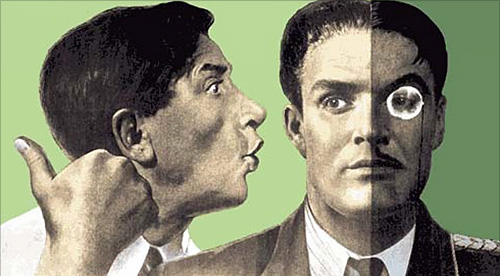 As it was reported by mass-media, President Viktor Yanukovych approved so-called "package of laws by Oleynik-Kolesnichenko", which, according to one of its authors, was developed for over two years. And of which no one even knew about until yesterday. Nevertheless on one not so beautiful morning Ukrainians woke up in a police state. Well, not exactly: it became police state after students were beaten by "Berkut" in November Maidan. And yesterday Ukraine became a state swiftly slipping into a dictatorship.

Still there have not been yet any official confirmation and information published in press is quite different: some periodicals wrote that the whole "package" was made official, others reports that Mr. Yanukovych signed only five out of 10 laws from among "Forward into the Past". One way or another, what happened means the one thing: the consequences of the "package" for Ukraine might be unprecedented – in the worst sense of the word. Because our country, which just recently declared its democratic and European aspirations, yet did not know such restrictions of civil liberties. Actually, the sudden failure of such "aspirations" caused the situation when lower classes no longer want it. But the upper classes still very much can, which was demonstrated the previous day by the ruling party deputies, who voted "by hand" with the gross violations of procedures and without even reading the texts they raised their hands for. In fact, Ukraine has entered a state of emergency – with the only difference that its rules will by implied not on temporary but on permanent basis.

One of the authors of the "package" Vadym Kolesnichenko, who has no need to be presented to LGBT community – he is the one who created a blessed memory bill banning "propaganda of homosexuality", – has the nerve to claim that "Ukraine is now finally adopted a Code of the legal state". More details with the arguments of the deputy are available here: Kolesnichenko is full of joy giving Holland as an example, as well as USA law of FARA dated 1938 (!) and even the Israeli-Palestinian conflict, along with the situation in the Middle East. A reader might get an impression that the quotes used in blog of Mr. Kolesnichenko were either stolen by him from someone or pulled out from different sources and molded into a pile by a principle of "the wrong end of the stick".

But in reality, behind a "beautiful picture" named after Oleynik-Kolesnichenko hidden the following: And beside that – an introduction to the legal field of the infamous term "Foreign Agent", the consequences of which Russian LGBT organizations have more than overdrunk from the bitter cup, who kept a low profile in courts and regularly fundraising money to pay enormous fines being convicted as such "agents".

Henceforth, a similar rule is being introduced in Ukraine, and let us analyze this point of Oleynik-Kolesnichenko plan in more details, because it directly applies to any NGO, including "Gay Alliance Ukraine", as well as the other human rights bodies, engaged in non-commercial activities for foreign grants.

It is said in the newly minted law "On amendments to the Law of Ukraine "On the Court System and the Status of Judges" that: "Public organizations, as well as separate branches of foreign non-governmental organizations, which on the date of entry of the present law into force receive funds or other property from foreign sources and participate in political activities carried out on the territory of Ukraine, within three months since the date of entry of the present law into force are obliged to perform actions necessary to acquire the status of the public association, which performs as a foreign agent… Failure to fulfill this obligation is the ground to prohibit such public organization or to terminate the activities of the separate branch of a foreign non-governmental organization in the accordance with the law".

If we translate all the words from the official documentation language to the human one, it will look like this: from now on any undesirable organization, which activities being financially supported wholly or partly from abroad must be registered as "foreign agent". Otherwise, the organization is liquidated by the authorities. Such a foreign agent will be charged with a bunch of taxes and requires a monthly report on the name list of governing bodies and the amount of received funding with a description of its targeted use. The development of civil society institutions in Ukraine thereby is discarded for decades. "Public organization is considered to be acting as the a foreign agent if to ensure its activities it receive funds or property from foreign states, its state bodies, non-governmental organizations of foreign states, international non-governmental organizations, foreign citizens, stateless persons or their authorized persons receiving funds or other property from mentioned sources and that participate, including on behalf of foreign sources, in political activities on the territory of Ukraine, – it is stated in the draft law. – Public organization, except for a political party, is recognized engaged in political activities undertaken on the territory of Ukraine, regardless of its goals and objectives set forth in its founding documents, if it participates (including through providing funds) in organization and conduction of political actions, which are intended to make influence on decision-making and reformation of state policy defined by authorities as well as to form public opinion according to the objectives state above".

While reading these bureaucracy documents even without translation becomes clear that in a country of "traditional values", where if following such a state policy homophobia will be soon documented at the highest level and any action for LGBT rights will be perceived as "influence on decision-making and reformation of state policy defined by authorities". And that is, as they say, you don't even have to go to a fortune teller to find out that.

One more point contained in "collected edition" by Oleynik-Kolesnichenko:  limitation of freedom of speech through a prohibition of online media activities (applies to our site as well) without a proper registration thereof as a news agency. A fine for violation of this rule – from 600 to 1,000 minimum incomes with confiscation of manufactured products and means of its manufacture, in the case of repeated violation – from 1000 to 2000 untaxed minimum incomes.

Most Ukrainian media resources are subject to that article, so shortly those who will not register as the news agency (procedure itself arises many questions, but it is not about that right now) will be forced to shut down in order not to interfere with implementation of the "state policy". The same Big Brother in a form of a special committee on TV and radio issues will be able to watch users through the service providers: they will be obliged to limit access to websites which will indicate the finger of punishing authorities. For failure to fulfill the requirements on restriction in access to Internet – a fine of 6800 UAH.

The first wave of displeasure has swept the World. One of the biggest international organizations Freedom House, in partnership with which Gay Alliance Ukraine itself implemented its projects, called upon Viktor Yanukovych not to sign draft laws adopted by Verkhovna Rada that violates the State's obligation to observe human rights. Explicit parallels with similar Russian laws are being discussed and the president of Freedom House David J. Kramer notes that "it is painful to watch how democratically elected government of Ukraine more and more moves away from democratic aspirations of the people of Ukraine ", shadowing the country with "dark ages".

A lawyer and the Head of the Centre of Political and Law Reforms, Igor Koliushko, said: "What I managed to read in no way connected not only to the principles of law, but even to a common sense. Constitutionally granted rights of citizens are being violated. They are the rights to freedom of association, freedom of social activities, and freedom of peaceful assembly. Many European standards and decisions of the European Court of Human Rights are being violated. But all of the mentioned shall be subject to compulsory implementation since Ukraine ratified the relevant international agreements".

In social networks, the use of which in accordance with the "package" may soon become a luxury for Ukrainians, Ukraine rank together with Belarus and North Korea. Not to mention the "older sister", who bought the entire country from Yanukovych for only 15 billion US dollars.

EU High Representative for Foreign Affairs and Security Policy Catherine Ashton has said that laws adopted without debate by Verkhovna Rada contradict international obligations of Kyiv. The U.S. State Department is confident that "the essence of such actions makes us doubt the devotion of Ukrainian parliament in Kiev to democratic norms." International organization leading the fight against corruption Transparency International explicitly reports that signing of the package laws by Yanukovych will "destroy any displays of social disobedience in Ukraine and will launch repressions turning Ukraine into a dictatorship".

Ukrainian human rights organizations claim that a state has entered a an era of reaction and obscurantism: "The law grossly violates the fundamental freedom of conscience, opinion, expression, information, assembly, association, movement, ownership and the right to privacy, thereby ignoring the relevant constitutional norms and articles of the UN International Covenant on Civil and Political Rights and Convention for the Protection of Human Rights and Fundamental Freedoms, as well as Article 22 of the Constitution of Ukraine. It should be especially noted the enrichment of law and modern legal vocabulary with a new term – "foreign agent". Simple linguistic and legal analysis of the statement, in which the legal meaning of the term "foreign agent" is being disclosed, gives us grounds to consider that from now on, any public organization receiving funds from foreign foundation, embassy, organization or individual grant financial support acquires this new discriminatory status. The term "foreign agent" in its content bears stigma and a negative marking on the human body, from which society should expect threats and therefore such organization  is subject to aggressive social ostracism, exile and disposal".

Ukraine faces the threat of the dictatorship