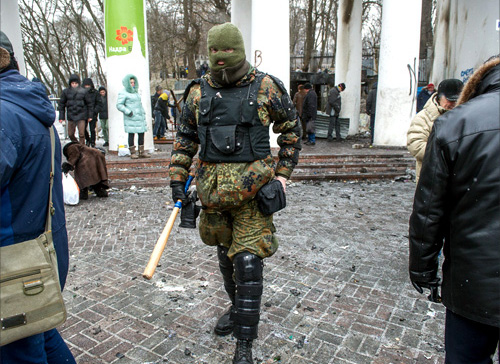 Revolutionary nationalist movement "Right Sector", formed in the very beginning of the Newest Ukrainian Revolution (NUR), supported violence against LGBT, though verbally denies it, notes Gay-Forum of Ukraine. According to Mr.Skoropadsky "we see that left political forces and LGBT, and radical liberal forces – they are in fact being marginal groups in Ukraine, and we certainly support all the society anger, which spills out on them". Besides that Mr.Skoropadsky spoke of "the evil that came into this world under LGBT disguise to eliminate the divinity in human souls, which has to be uprooted: They knew where they were going to [gay, feminists]. And, as it is written in the New Testament, the Savior said – I have not come to bring peace, but a sword."

"Speaking head" of nationalists expressed his intention to rebuild Ukraine so that Christian values would dominate over democratic: "Right Sector" is fighting for establishment of Ukrainian cathedral independent state, where Christian values will be in the first place. We will ban propaganda of any evil and anything that contradicts to the New Testament, what contradicts to the Gospel", – declared Mr.Skoropadsky.

Intentions of the "Right Sector" sounds like an oxymoron: from one side, after the overthrow of Yanukovych this force intends to "take a course on European integration", while from the other side – to forbid and punish all in a row, first of all – "propaganda of nonconventional sexual orientation" what contradicts basic European principles. However, nationalists intend to show Europe "where it should go". As they say here – all jumbled together: people, horses…

Mr.Skoropadsky told that the foundation of "Right Sector" on approximately 80% consists of the members of organization "Trident" named after Stepan Bandera.

"We are often asked if we are ready to be integrated into Europe. Definitely Europe is closer to us than the savage authoritarian Russia with its current regime. But we look at Europe with no pink glasses – we see a lot of negative things there as well, e.g. loyal attitude towards LGBT and total liberalism. We are not ready to heed to that. We are Christians and we can not abandon the beliefs that we had always had. We want to make Europe healthier in order to make Ukraine a stronger state that would be able to dictate, no, not dictate, but rather advise which direction to follow. Because the current state of Europe is being terrible. People stopped going to churches" – quotes Latvian radio Mr. Skoropadsky's words.

Artem Skoropadsky describes Poland, where abortion is prohibited, as a positive example of European state. At the same time he considers the legislation of France unacceptable since this country legalized same-sex marriages.

As it was informed by the "Ukrainian pravda", on Thursday the European Parliament intends to adopt a resolution on Ukraine, which may include recommendations on granting financial assistance to Kyiv. During the conversation between the Chair of the delegation to the EU-Russia Parliamentary Cooperation Committee Knut Fleckenstein and a journalist of Kommersant-Ukraine it became clear that it will be difficult for the new government to achieve financial aid in the world, if it will be represented by the radical forces. "It is important that the Transitional Government would comply with the basic requirements of the Maidan as soon as possible," declared Mr. Fleckenstein.

In response to the remark that Russia "is concerned about increasing radical and anti-Russian sentiment in Ukraine", Mr. Fleckenstein stated: "Not only Moscow is being concerned".

"European Union does not support political forces like "Right Sector". As an MP from Germany I feel special responsibility in preventing far-right extremists political parties from coming to power, underlined he. – It would be very difficult for the governmental coalition to gain the trust of international partners needed to obtain financial assistance should it include the radical forces. Tensions in Ukraine in this case may arise not only with Russia, but also with the European Union".

On the question whether it is still possible to form an Association between Ukraine and EU he answered the following: "The EU for its part is still ready to support political and economical reforms as they were discussed and agreed in the unsigned Association Agreement".

Svyatoslav Sheremet, head of Gay-Forum of Ukraine, a partner of UPO "Gay Alliance Ukraine", commented on the position of the "Right Sector": "Ukrainian citizens from LGBT community stood with everyone shoulder to shoulder on Maidan with no rainbow symbols not in order to listen to the threats of the extreme right forces. From the very beginning of the Revolution we declared, that to prevent provocations and in order not to not confuse the key focus points, there would be no LGBT related issues during public protest actions. We kept our word. But if now someone tried to build New Ukraine based on principles of exclusion of equal social groups it would be not New Ukraine but rather underdeveloped, retrograde Ukraine of splits and hatred.

Unfortunately, "Right Sector" yet does not know or does not understand that most of the LGBT people do share traditional values of the rest of our nation and do not fight with Churches. Our goal is modernization and development of our country on every front so free, healthy and successful people could live here. Now we are preparing a package of the reform proposals – starting from the level of renewed Constitution till the level of law regulations. Regarding "Right Sector", it is unwise to throw themselves with such frenzy on LGBT community while basically the Revolution is not finished yet could mean only one thing – switching the points from important issues to unimportant".