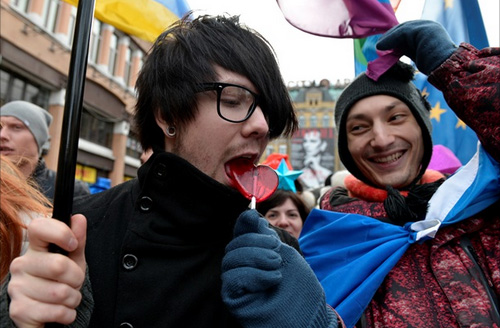 Provocations with participation of so-called "gay-titushki", as well as other actions to disrupt EuroMaidan, as it was lately found, were organized by the Security Service of Ukraine. It was indicated in a plan of the agency recently made public by the MP.

Gennady Moskal, MP of Batkivshchyna Party, showed the plan of the Security Service of Ukraine on introduction the agents to EuroMaidan and on discrediting events of the protest movement, reports ed. "Glavred". There was also listed "gay parade" in the city center planned between 8 and 14 of January.

Among other tasks of the agency agents were listed the following: power outage on the Maidan, damage the windows of apartments, where activists live, and disabling of biotoilets.

"The primary task, which the Security Service of Ukraine assigned their agents on EuroMaidan, was to piss more to damage the biotoilets. The fact that the Security Service of Ukraine, which so wholeheartedly Viktor Yanukovych believed in, is no more than a bunch of clowns and provocateurs, was very well-illustrated by a plan of agent-operating activities on neutralization of EuroMaidan prepared by this "formidable" special service", – wrote the politician.

Let us remind that on January 11th  in the area of Bessarabska square the fake "gay parade" took place, which involved a couple of dozen so-called  "gay-titushki". The fact that provocations on LGBT-related issues had been preparing within the campaign to discredit EuroMaidan, became clear to the community on the previous day and was immediately reported  to the public by "Gay Alliance Ukraine".

Back then LGBT activists by all means were trying to prevent the negative effects of this campaign and discrediting of the community itself in particular. They are particularly even organized a special press conference, where was announced the official position of the Ukrainian LGBT movement regarding involvement of the community in EuroMaidan activities.

VIDEO transcript (1:50)
Headline: New region 2: In the city center of Kyiv fake "gay parade" was released against EuroMaidan.
Speaker 1: well, I came to support people.
Interviewer: Support in what?
Speaker 1: Well, in this action.
Interviewer: And what kind of action is it?
Speaker 1: Well, it is just an action to support human rights of the otherwise-minded people, not to infringe upon their rights. Well to make a loyal attitude towards the people who belong to sexual minorities.
Speaker 2: Today we came to inform people that this so-called "action of the sexual minorities" is an absolute provocation. These people were gathered by the agency that cast actors. These people were paid and we even have the evidence of it from the social networks. This action set several goals. Obviously the main goal is to discredit EuroMaidan among Ukrainians and to set up Ukrainian people against European integration. This issue is not new at all; some forces in Ukraine are trying to impose the idea that Europe is so-called "Euro-Sodom", or "homodictatorship". This is an absolute nonsense. But people use the fact that 80% of Ukrainians have never been to Europe, and they can be easily fed a line.
Interviewer: Could you introduce yourself?
Speaker 2: My name is Zoryan Kis.

What does Putin want?