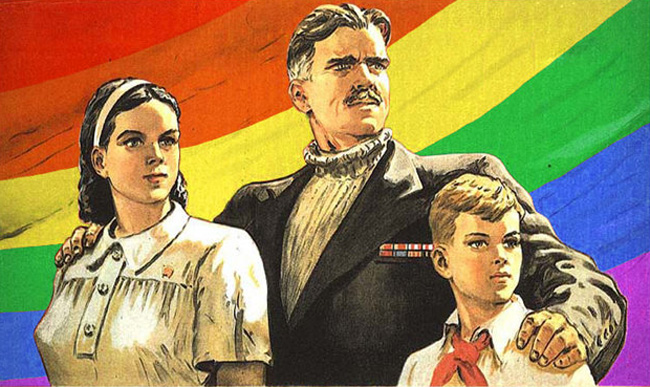 There is another hysterics in the Russian media: they report to their readers that the Verkhovna Rada of Ukraine has "allowed propaganda of homosexuality" at the legislative level.

All the fuss is about the removal from consideration of the draft law No.1155 "On the Prohibition of Propaganda of Homosexuality Aimed at Children". The authorship of this document belonged to infamous ex-MP from the Party of Regions Vadym Kolesnichenko, who long been deprived of his deputy powers (according to his words currently "raising goats" in Crimea).

The draft law itself had been removed from consideration also not today, but as far back as in April. However, the Russian press has only now got nosey, which served as another reason to spoke against "Kiev Junta".

In other Russian media wording is even more outstanding. All if them reports, that "earlier the Verkhovna Rada of Ukraine adopted a draft law allowing gay propaganda among adults". With reference to RIA Novosti currently headed by Dmitry Kiselev, prominent fighter with a "junta" and "turner of America into radioactive ashes". However, the Russian press neither specifies when exactly the Ukrainian Parliament "allowed propaganda to adults", nor provides any hyperlinks to the relevant documents.

A well-known to us Vitaly Milonov did not lose a chance to speak on this issue: "The decision of Rada not to forbid the propaganda of homosexuality among children is not at all surprising, – reported an eminent gayfighter to "Russian news service". – All countries that are choosing to be loyal doggie on the doorway rug by the rich owners, allocated the corresponding functional – not to blather, stupidly follow the commands of European deputies, even the most delusional ones, and completely abandon the Christian values and the Orthodox self-identity", – claims MP.

He also declared that "the current leaders of Ukraine themselves are open to propaganda of homosexuality among children".