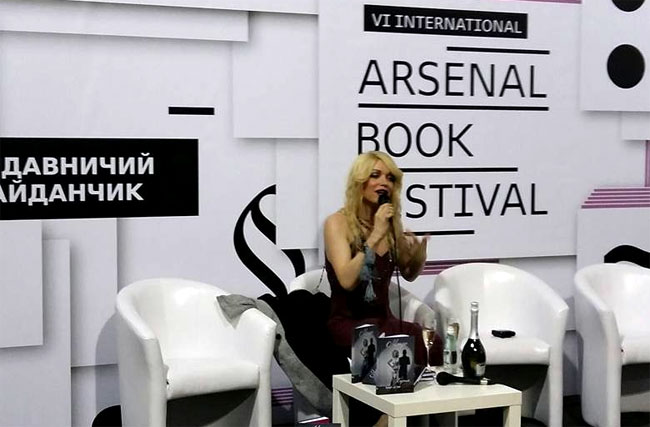 Famous Ukrainian travesty diva Monro made her debut in literature with the book called “It’s Good that I’m Not a Matron!” It was presented in frames of Knyzhkovyi Arsenal book festival, however some incident took place during the presentation and Monro told about it in her Facebook.

She blogged a photo that showed that her garments were splashed with kefir (sour milk drink) and promised to go to the police. “I’m alive and relatively fine. The guilty will be punished,” Monro added and didn’t forget to thank everyone who visited the presentation and waited for the autographs.

As the comments showed, not everyone understood what exactly happened and why, some even supposed that kefired dress was a designer’s idea. But lots of travesty-diva’s fans don’t doubt the underlying reasons. “So please tell me, how do we go to Europe? The most reasonable, sensible and harmless character in show-biz world, such as Monro, was splashed with kefir and green antiseptic. Just because of her personal life and personal choice… Oh yes! The most interesting!!! ***THEY HAD TO PREPARE, WAIT, FIND A MOMENT AND SPLASH!..”

Later Monro told the details of the incident:

“I answer everybody without details or poetic notes: yesterday at 6:15 p.m. when I headed to the presentation of my first book #itsgoodimnotamatron two unknowns splashed me with kefir and paint by the entrance to Mystetskyi Arsenal! Mostly me and my things were damaged but people waiting in the line to get to Knyzhkovyi Arsenal were also a bit harmed. They threw [it] at my back, definitely not a manly behavior…)”

“One of the attackers was detained on the spot by the Arsenal security and I thanked them a lot. The second was gone. When I was writing an application for the police some shady characters came and were indignant with my existence and f*ggots domination in private talk with law-enforcers, suggested that I should repent…”

The presentation was a success.

“The presentation went with flying colours,” blogger Yurii Dudkin wrote. “The main virtue of Monro (Monritta Khachaturian) is her ability to laugh even at minor troubles.”

In her interview to GAU Monro, the show-woman, MC and guest of various talk-shows, told that she would be comfortable to live with “third gender” mark in her passport. This is the way gender non-conforming people in India live after the corresponding law coming in force. “But it’s a question not for me but for Verkhovna Rada,” Monro added. “Maybe third gender will be acknowledged in our country in a hundred years. We may discuss it in the interview but in reality such issues are solved on entirely different level.  And it’s really hard to get through to men and women sitting in their offices for 30-40 years and not giving a damn about third gender as they really care only about state procurements and kickbacks. So, as knowing people told me, sit down and be invisible. Of course, I won’t be invisible. Because everyone in this country has equal rights. Me, you, everyone – no matter who we love, whom we sleep with or what we do.”