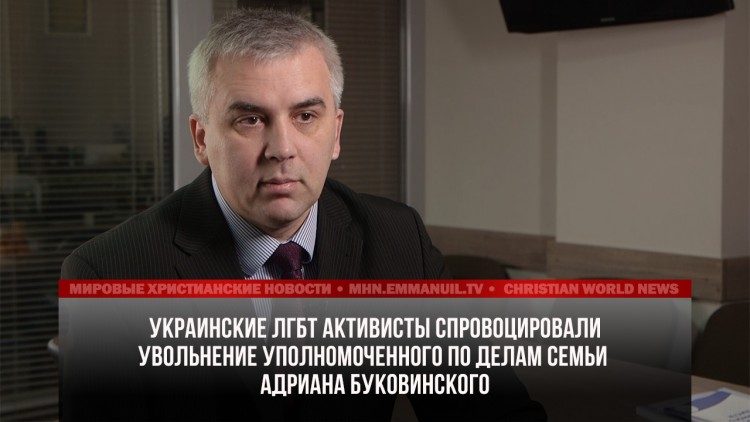 Answering the request of human rights advocate Zoryan Kis, the government informed that the decision on appointment Bukovynskyi the Plenipotentiary for Family was cancelled as early as on March 10 on the session of the Cabinet of Minister. Due to this special control of his candidature was not required. It’s also pointed out in the document that the contest for the position of Government Plenipotentiary for Family was not announced.

Let’s recall that at the beginning of March the Cabinet of Ministers had introduced the position of Plenipotentiary for Family and had appointed Adrian Bukovynskyi on it but after the fuss the media made about his homophobic utterances the Cabinet claimed that Bukovynskyi didn’t assume office and was under some special control. Besides, the government promised to make open contest for this position.

The speech that Bukovynskyi had to pay for was delivered on the press conference “Summit Ukraine – EU: are there any ways of getting closer to Europe without propaganda of homosexuality in Ukraine” in 2013 (ukr). He said the following: “The anti-norms are imposed on the society and we are getting prepared to accept them. It’s expected that the society will change its opinion regarding these questions. Now we are talking of rights for gays and lesbians. But we need to talk of other characters of gender spectrum, such as pedophiles, necrophiles, zoophiles etc. These are one chain’s links. […] They also go after the “otherness”.”

Read also: By Verkhovna Rada homophobes urged “not to slaughter family” and LGBT activists – not to manipulate the facts

At the end of April the he campaign of Love Against Homosexualism movement under the slogan “Don’t slaughter family!” took place by Verkhovna Rada. Some dozens of homophobic citizens demanded, among other, to bring Adrian Bukovynskyi back to the position of Government Plenipotentiary for Family. Bukovynskyi also participated in the demonstrayion. He went to LGBT activists having opposing campaign under the slogan “Look for real reasons”, and engaged in a debate with them trying to prove that he was not a homophobe. At the same time Bukovynskyi told that he didn’t find homosexual “way of living” acceptable because “he is a Christian.”