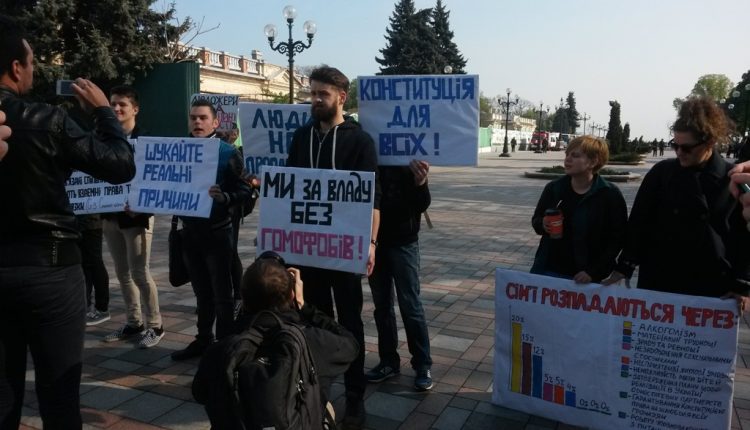 Today the campaign of Love Against Homosexualism movement under the slogan “Don’t slaughter family!” took place in the government quarter. Several dozens of homophobic citizens warned Ukrainians against “homodictatorship”. LGBT activists also came to the parliament to voice the counter opinion.

“Homodictatorship is a way towards fascism”, “Homosexualism is AIDS”, “Father, mother, children, home! Ukraine is not Sodom!”, “Traditional family – united country!” – these messages were on the banners of Love Against Homosexualism movement’s adepts. They demanded that Ukrainian authorities didn’t take the definition of marriage as a union of a man and a woman out of the Constitution but took all paragraphs aimed at “legalization of same-sex partnerships and propaganda of homosexualism in Ukraine” out of National strategy on human rights and also brought Adrian Bukovynskyi back to the position of Government Plenipotentiary for Family. Besides, among their demands was adopting the law on ban of “homosexualism propaganda”. Some churchmen were among the participants of the campaign and started it with prayers.

At the same time LGBT activists and civil society actors also were by the Parliament with counter-campaign under the slogan “Look for real reasons”. “Family is composed of people living together, united by common household and having mutual rights and obligations,” they quoted the Family Code of Ukraine. They drew public attention to the different kinds of families and the fact that acceptance of equality of homosexual and heterosexual families doesn’t lead to the marriage decay. The activists reminded that real reasons for family breakdown were alcoholism, material difficulties, infidelity and jealousy, sexual dissatisfaction, substandard housing, impossibility to have children. And there is no National Strategy, Constitution and Government Plenipotentiary for Family in this list. 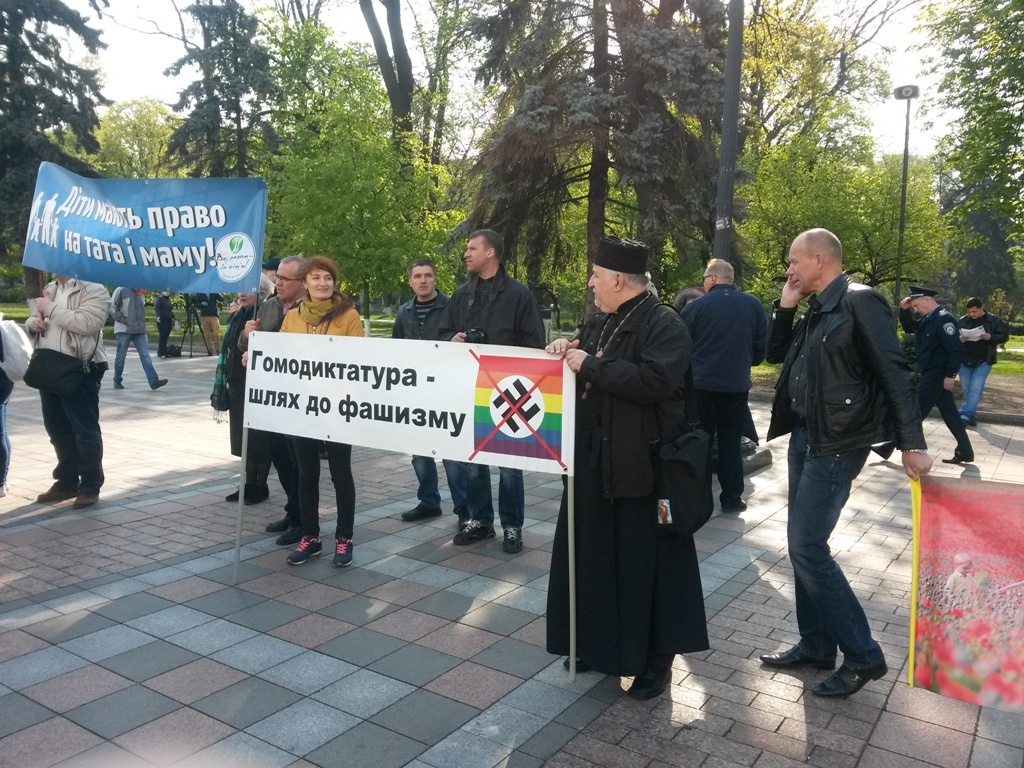 Banners: Children have right for father and mother! Homodictatorship is a way towards fascism

It’s curious that before the campaign the participants of homophobic meeting were confused, they asked LGBT activists “When do we start” and told that “Ruslan Kuharchuk will come soon” (one of the organizers – author’s note.). Activists politely told them where to find their friends.

Read also: “Our ceremony is dedicated to the law on partnerships”: Zoryan and Tymur tell about their wedding (ru)

Adrian Bukovynskyi also came to Rada. The president of Family Ukrainian Charity Foundation entered into controversy with LGBT activists and started arguing that he was not a homophobe because, as he told, he wasn’t afraid of homosexuals and didn’t hate them. However, Bukovynskyi truly told that he was not ready to accept their “way of living” “because he is a Christian”. Moreover, giving comments on his words about LGBT the politician pointed out again that they were taken out of context. Nevertheless Bukovynskyi admitted that he brought homosexuality into line with pedophilia and zoophilia. “I told that these were notions of one spectrum” he said and expressed his concern about pedophiles potentially also demanding to change legislation and lower age of consent down to 12 years old.

Bukovynskyi literally said the following on the press conference “Summit Ukraine – EU: are there any ways of getting closer to Europe without propaganda of homosexuality in Ukraine” in 2013: “The anti-norms are imposed on the society and we are getting prepared to accept them. It’s expected that the society will change its opinion regarding these questions. Now we are talking of rights for gays and lesbians. But we need to talk of other characters of gender spectrum, such as pedophiles, necrophiles, zoophiles etc. These are one chain’s links. […] They also go after the “otherness”.” Let’s recall that these words played a low-down trick on the politician. He stayed on his position of Government Plenipotentiary for Family just for a couple of days as the Cabinet of Ministers announced that open contest would be held for this position, because of the official having been accused in homophobia. Bukovynskyi claimed that the government had to response because of the indignation raised by LGBT organization and public activists in general. But the very preparations for the contest were not started yet, the politician claimed.

Other people from the opposing camp tried to persuade activists that their actions are sinful. Some of them were praying by the protesters, others gave out the cards of the churches and were telling that there was no such thing as orientation and it’s necessary to “find the way to God”. Both campaigns were peaceful and without any incidents.