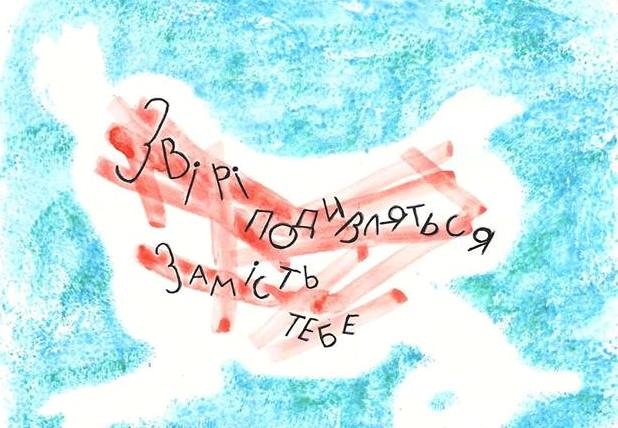 The caption reads, “The animals will look instead of you”

A famous Ukrainian writer Oles Barlig invites donations for the publishing of the collection of dramatic pieces related to the LGBT themes.

The book titled “The animals will look instead of you” will include ten plays, whose characters represent different sexual and gender identities. Non-cisgender characters are central figures in a number of the plays. In other plays, their non-traditional gender identity contributes to the plot. Oles Barlig is the author of all plays. The stories are written in different genres, including mystery and love stories, works covering acute social problems with documentary materials used.

“I have been looking for the opportunity to publish a multi-authored collection of LGBT plays since two years. Besides, I wanted to broaden my horizon and get to know new writers and literary devices to cover the LGBT themes. Since that time, I have had many own texts I couldn’t give to the public because the festivals and publishing companies are very reluctant to what doesn’t fit into their “formats.” Therefore, I decided to seek donations for the publishing of my own playbook”, says the writer.

Through an interaction with art, the writer intends to increase public understanding of the violation of the rights, persecution and bullying of LGBT in our country. He also wants to provoke an open debate on the topics raised in the public. The author doesn’t mythologize the people with different forms of identity. He just shows them, as they are – ordinary citizens of Ukraine.

Oles started to raise funds alone, not through the popular platform Спільнокошт (Crowdfunding) since it gives him a greater flexibility, and he isn’t time-limited, “Having pondered I decided against the platform Спільнокошт mainly because there is a time limit for the project implementation period. By opening a bank account, it is possible to pile up money a year, two years until it is enough for the publishing of the book.”

According to the playwright, there is an agreement with a publishing company to publish the book when the required amount is available. He promises to give an account of the new donations. The money is needed to pay for the publishing services, he underlines. Today UAH 300 is available out of UAH 13650 required for the printing of the 500 copies.

Read also: Voices of LGBT community at the “Week of a topical play”

“A common man likes to tickle one’s imagination by the idea of the world plot organized by the reptilians, masons and gays. I have to disappoint them as the first donation was made by my friends, who are heterosexual couple”, notes Oles Barlig.

After the book appeared, it is to be presented in several cities of Ukraine during the different cultural events. The author also hopes that the plays from this collection will gain traction among the stage and film directors and will be used in theatres and film production.

Oles Barlig is a poet, prose writer, playwright and culture bearer. He was among the anthologists of the queer literature “The 120 pages of Sodom” released in 2009. His play “Ouroboros in “Orient Express“ dedicated to the key events of the LGBT movement in 2015, was shortlisted for the Week of a Topical Play festival. For further information about the book and fundraising, please, check the official project page on Facebook.