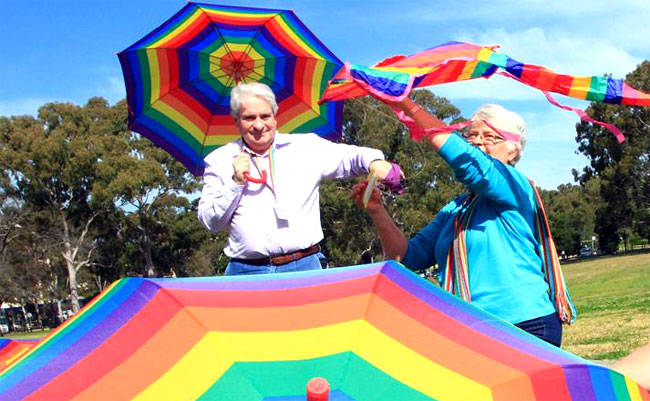 Ukraine to host conference for parents of LGBT-children

In the end of the month in Ukraine will be conducted a conference for parents of LGBT-children entitled "Our families: the way to understanding, acceptance and support". The goal of the event is to gather parents with children who are gays, bisexual or transsexuals in order to discuss common problems and share experiences of parental movement in the post-Soviet region.

Conference is organized by the initiative TERGO, which unites parents of LGBT children from all over Ukraine.

Many interesting people are invited to participate in the conference, including the European Parliament deputy, Mrs. Ulrike Lunacek, who represents Austrian "green" party, and not only is the chairwoman of the European Parliament's LGBT Intergroup, but also the first openly gay politician in the history of her country. Mrs. Lunacek is famous for a wide range of initiatives related to promotion of LGBT human rights and support of the human rights movement on the post-Soviet area, including Ukraine.

It is her who not so long ago initiated the appearance of the Eurovision winner, drag diva Conchita Wurst in the European Parliament. And not only with a small concert, but also with a speech during the widely covered press conference, where the singer told about everything she believes regarding the need to respect the rights of queer people.

But let us focus on the announced conference. It will be attended by representatives of public organization PFLAG, the name of which stands for "Parents, Family members and Friends Lesbians and Gays". This organization, which exists in the United States and other countries for many years, has huge experience in building an active civil society and promoting the interests of their queer children. And being participants of the conference they would glad to share their experience with Ukrainians. "My only beloved son is gay. It is not something I am especially proud of and not something that makes him special, – says Olena Global, the chairwoman the parent initiative TERGO. – It's just an objective reality. My son made a choice not to hide his sexual orientation. Now, many years later, I strongly believe that there is no causal link between the "propaganda" and the choice of sexual orientation".

This initiative created by Olena exists so that more parents of queer children could understand and accept these words she speaks of.

For participation in the conference are being invited parents of LGBT children, public activists and experts exploring LGBT related issues including challenges in relations between gay, bisexual and gender non-conformal children with their parents. It is very easy to participate in the conference: you only need to fill in the form on the website of the organization.

Participants of the parent club of UPO "Gay Alliance Ukraine" will happily join the conference as such experience is yet unique for our country.