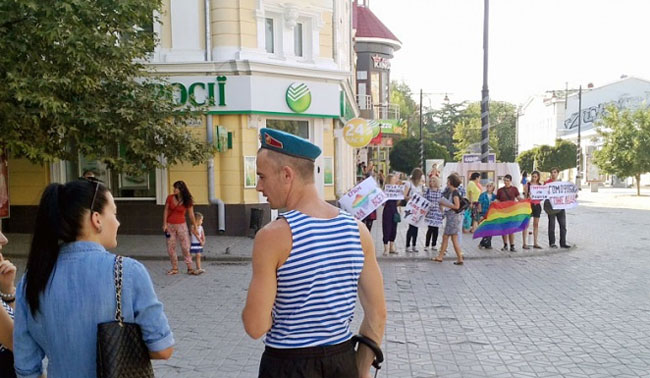 After the illegal annexation of the Crimea human rights activists have to deal with the increasing number of cases on human rights violations – such as prohibition on the freedom of assembly, – as well as arrests and abductions of pro-Ukrainian activists. Ukrnews.today published brief article in English entitled "No place for gays in Putin's Crimea".

In September last year, the Crimean self-proclaimed leader Sergey Aksyonov promised that the authorities would never support LGBT community and not let them to hold any public events on the peninsula. Aksyonov stated that Orthodox and Muslim family values should "be cultivated and encouraged" in the Crimea (which sounds especially cynical in the light of the well-known attitude of the current Russian authorities towards the Crimea's Muslim Tatars). According to Aksyonov such processes happening now in the West, where "dudes allowed to get married" are "inadmissible and unacceptable" in Russia.

"We in Crimea do not need such (gay) people, they are not welcome and they will never hold any public events. I guarantee it", – promised Aksyonov adding that self-defense units would deal with LGBT representatives.

Referring to the article published on the website Gay.Ru, observers report that the statements of Aksyonov became a reality.

The inscription in the picture says: "Homophobia is fascism"

As recently as 2013, Crimean gays and lesbians came on the streets to protest the new anti-gay law "on homopropaganda" debated in the Ukrainian parliament. Even the fact that the Parliament of Ukraine considered such a document at all is shameful; however representatives of the LGBT community in the Crimea at least had an opportunity to express their dissatisfaction openly. A group of young people with posters "Homophobia is Fascism" came to the city center of Simferopol causing no adverse reactions: the activists were able to hold their meeting facing no violence neither from passers-by, nor from representatives of the law enforcement agencies.

Now, the Crimean authorities de facto obey the Russian legislation, which includes the infamous law banning "gay propaganda" by authorship of Elena Mizulina. Aksyonov with his organization "Russian Unity" organized anti-gay and pro-Russia events "to fight against homosexuality" even before the illegal annexation of the Crimea. Now he declares that any public gatherings of the sort would be dispersed by local police and illegal "self-defense" forces "in 3 minutes". Like many of their political associates, "Russian Unity" does not mind to use "Black&White PR" providing the streets with paid up fake gay people, who look like mummers-clowns.

Artyom, a member of Crimean LGBT community, told Gay.Ru of a couple gay bars being forced to close after police raids – even change of sign on the doors didn't help. The owners of one bar eventually were forced to relocate "to the continent," as now people in Crimea call the rest of Ukraine.

Crimeaeiz, which until recently was considered as main Crimean gay-resort not only for Ukrainians, but for people from all over the former USSR countries, is now empty. The interlocutor of Gay.Ru Dmitry, who used to work as a dancer at the resort for years being quite satisfied with his terms, recalls having seen many famous people in Crimeaeiz and even meeting several Ukrainian Parliament members there. However, in 2014 his friends advised him against working at the resort, explaining it could be dangerous. But even such an income is now under a question: gay tourists refuse to go to the Crimea fearing reprisals. This sector respectively brings no revenues to the Treasury: many homosexuals had enough resources to ensure luxurious resort. Now they are being replaced with refugees from Eastern Ukraine, who can not afford to brag with their financial situation. They are, however, were also quickly moved from the seashore deep into the peninsula – far away from the sea. Dmitry himself preferred to take a trip to Brazil, which he found a lot more gay-friendly.

The sinister "self-defense force," formed in February 2014 to aid the Russian invaders, have started "hunting gays" on the Internet, Artyom claims. He says his friend was lured to a fake date via social networks and beaten by five "Russian World supporters," who threatened to kill him if he didn't move to Europe. "Gays are a red flag for them," Artyom notes.
However, even despite the threats, not all gays are eager to leave Crimea – unlike the most Crimean Tatars suffering from their pro-Ukrainian views. Apparently, as the publication concludes, now to be a representative of Crimean Tatars is even worse an offense than being gay. Some LGBT people do still believe that Russia will "bring everything here in order". Yet Artyom, like many Crimeans, sees no signs of such order, and grimly predicts that after the Tatars, the gays may become the next primary target for the state.

Based on materials of Ukrnews.today

Ukraine to host conference for parents of LGBT-children