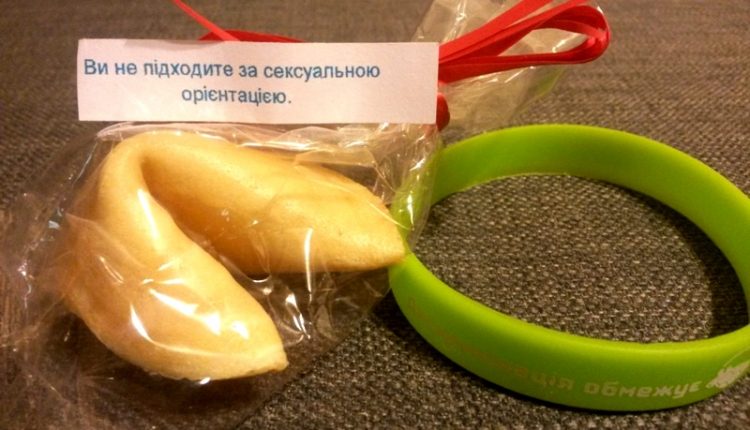 The inscription on the picture says: “You are unfitted because of your sexual orientation”

On March 24 in the framework of the Human Rights Documentary Film Festival Docudays UA was held an interactive presentation of information and education campaign “Discrimination limits – act against!”.

The participants of the presentation were offered to participate in the role play, during which all the guests were able to feel themselves what it’s like to live in Ukraine being a part of some socially vulnerable groups. Thus, for example, “a lesbian” was denied the adoption of a child, and “a transgender woman” could not check into a hotel despite the fact that the room “was booked in advance”.

The audience was also shown a video opinion poll of the capital residents, which was created as a part of the presented campaign. Random passers-by were asked what of the proposed professions (a cook, a teacher, a secretary, a policeman, a doctor, a judge) is best suited for women and which ones – to men. Respondents pointed out that men are better fitted for a job like a police officer and a judge since normally they are supposedly more objective and characterized for better stress resistance. At the same time women, according to the average citizens, are better stick to the jobs like a teacher, or a doctor, because it is believed that women are more soft and loyal. Furthermore the majority of respondents stated that there is no discrimination in Ukraine.

For the second question “Who would you refuse in renting an apartment to: a Roma family, internally displaced persons from ATO zone, a family with children, a homosexual couple, students, a young couple or a foreigner?” the vast majority of respondents replied – to a homosexual couple. The passers-by often motivated their refusal to rent the premises to same-sex couples with the fact that homosexuality is unacceptable for Ukrainians. One of the interviewees requested clarification on what kind of a couple is it about in the question – male or female.

As the chairwoman of the Information Center for Human Rights Tetiana Pechonchyk noted that the overwhelming majority of Ukrainians do not understand what discrimination is, as well why is it a problem and how to address it.

“The key message of our campaign — discrimination exists and it concerns everyone. We might think that, sorry, but I, for example, am not a Rome, or I am not an IDP, and, well, it will not affect me, but in fact everyone does belong to a certain group that at any time could become discriminated on the basis of a particular feature. All of us has such specific features, — explained Tetiana Pechonchyk. — Discrimination may be connected to who the person is, who a person is considered to be and with whom a person is together.”

“It is even just by the fact that we are talking about this issue and it has been publicly voiced, we take the first step to overcome it”, — underlined the expert.

The event was held by the Coalition against discrimination in Ukraine and Information Center for Human Rights under support of Pact, Inc. in Ukraine, the International Renaissance Foundation and the Office of the Ukrainian Parliament Commissioner for Human Rights.