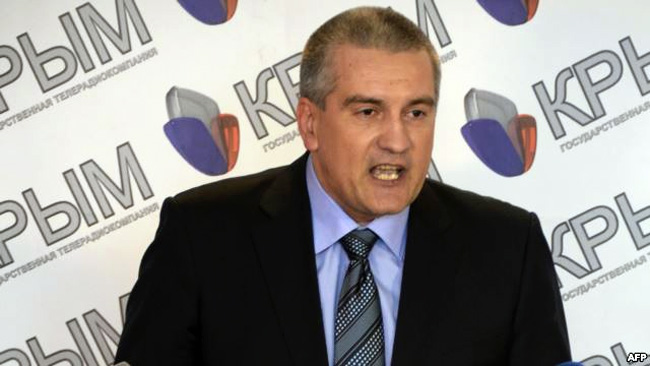 The authorities of the Crimea will never let representatives of the LGBT community to hold any public events on the peninsula. It was reported by Newsru with reference to the website krymr.com.

The corresponding statement was made on Tuesday, the 2nd of September by Sergey Aksyonov, who is being called in Russia – Chairman of the Council of Ministers of the Crimea and acting Head of the Republic of the Crimea.

Aksyonov reminded that Orthodox and Muslim family values should "be cultivated and encouraged" in the Crimea (which sounds especially cynical in the light of the well-known attitude of the current Russian authorities towards the Crimea's Muslim Tatars). And such processes happening now in the West, where "dudes allowed to get married" are "inadmissible and unacceptable" in Russia.

"The authorities will never support them", – said Aksyonov at the session of the Crimean government, in which the demographic situation in the region was discussed.
"We in Crimea do not need such (gay) people, they are not welcome and they will never hold any public events. I guarantee it", – promised Aksyonov.

After a cue from the audience (apparently, in support of gay people), he added: "If anyone would like to support dudes, at the street outside the Council of Ministers, them, I believe, that our police and self-defense forces (voluntary squad operating in the Crimea since the preparation of the so-called referendum on the state ownership of the region) will react immediately and in three minutes will quickly explain to them what kind of sexual orientation they should stick to."

Meanwhile, the difficulties between the Crimean representatives of the LGBT community and the authorities occurred long ago, even before the March "referendum". Moreover, gay people blamed pro-Russian forces for the current situation. But not everyone: there were those among Crimean homosexuals who expected more bright prospects from "reunion with Russia". However, as a result, according to one of the anonymous interviewees of GayStarNews, now it is "really unbearable" to live in the Crimea if you are gay.

A year before that a statement by Vladimir Konstantinov, once the Speaker of the State Council of the Republic, caused a great resonance. In particular he reported that unlike Europe, which "lives by completely different rules", gay and lesbian issues are not relevant for the Crimea. Even earlier against LGBT people spoke the former chairman of the Verkhovna Rada of Crimea Leonid Grach, well-known homophobe, who recently made outing for his former colleagues at the Communist Party of Ukraine. "I am against a situation where some people like same-sex love, while others have to endure it. And when they bring the famous Sir [Elton John] to our country, and people go to his concerts because he is crowned and world famous gay – it is extremely disgusting. Then my rights are being violated and, but not the rights of some sexual minorities."

In July the deputy commander of the volunteer public formation "Frontier" Constantine Zarudnev, commenting on a statement of the new Ukrainian Defense Minister – Valeriy Geletey that the latter is going to hold Victory Day Parade in Sevastopol, said that Ukrainian military will be able to hold except that a gay parade in the city. "Let them put on their tunics, thongs and high heels. Only they will not march in the city center but where we order them", – quoted Zarudnev by the newspaper MKRU.

Nikolai Alekseev, on behalf of the Crimean LGBT community: We will not sue the authorities