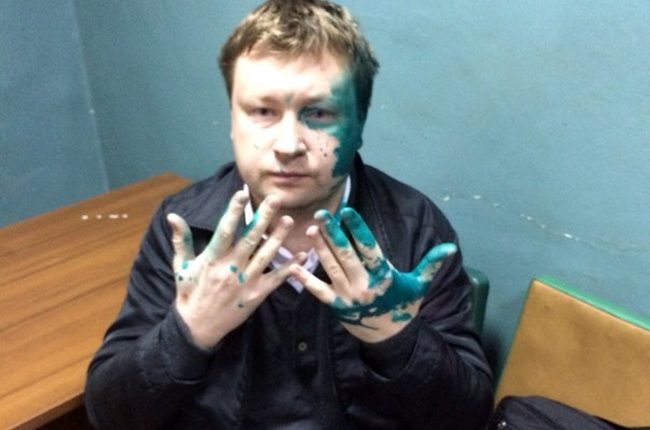 Nikolai Alekseev, on behalf of the Crimean LGBT community: We will not sue the authorities

An odious person in Russian LGBT movement Nikolai Alekseev on behalf of all the Crimean LGBT community informed that "has no intention so far to appeal to court in connection with the statement of acting Head of the Republic of the Crimea Sergey Aksyonov that there will never be any gay parades in the Republic. It was reported by Alekseev to rusnovosti.ru.

"We received refusals of the authorities to conduct parades in April of this year in Simferopol and Sevastopol. These decisions were appealed to courts and at the moment there are judicial proceedings that continue: they haven't ended neither in Moscow, nor in the Crimea. As long as we don't have the final decisions, there is no sense to speak about the submission of new applications", – explained Alekseev.

According to him, if the claims are not satisfied, "LGBT community will appeal to the ECHR and the UN Committee on Human Rights". At the same time Alekseev said that it is possible that in the future, if the words of Aksyonov on the prohibition of gay parades are enshrined in legislation, the activists will appeal to court.

During the conference on demographic development Sergey Aksyonov stated that everyone in the Crimea, and in the first place himself, is against same-sex marriage and relationships. "In Crimea such (gay) people are not welcome, they are not needed and they will never hold any public events. I guarantee it, – promised Aksyonov. – If anyone would like to support dudes, at the street outside the Council of Ministers, then, I believe, that our police and self-defense forces (voluntary squad operating in the Crimea since the preparation of the so-called "referendum" on the state ownership of the region) will react immediately and in three minutes will quickly explain to them what kind of sexual orientation they should stick to."

It hasn't been reported what LGBT activists of the Crimea think about what is happening – perhaps no one of them is left on the peninsula and now the mouthpiece of the Crimean gay movement is an exceptionally Alekseev. What is in fact is not surprising at all because ever since the March of this year when took place the so-called referendum on the state ownership of the Crimea, not recognized by the international community, Alekseev shows out there significant activity.

At the same time from the lips of "the leader of the Russian LGBT movement', who has been for long time called "Kremlin's Pocket Gay", spilling xenophobic and insulting statements against the citizens of Ukraine. Just the same he had previously bestowed to the Jews: because of his blatant anti-Semitism Alekseev being refused of cooperation by famous western activist, in particular, Peter Tatchell. "Just came back from the Crimea. For Russia in a ratio 50 to 1. Everyone hates Ukraine. They say they've been raped by khokhols for the last 20 years. We were literally hugged", – previously informed Alekseev in his twitter.

Attention: We invite female activists to participate in feminist and lesbian school