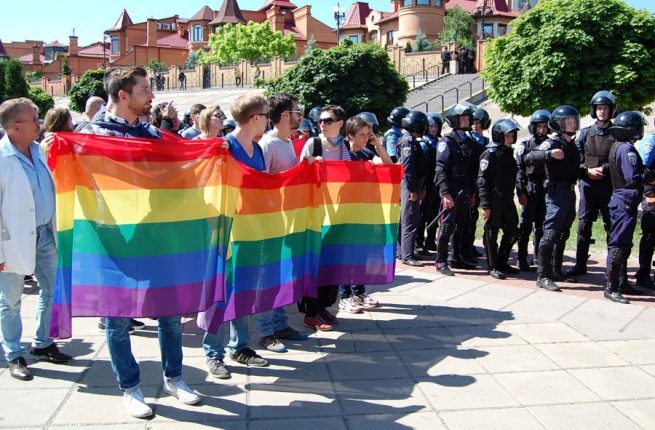 First three day away training for volunteers assisting with the security of the Equality March 2016 took place during the weekend near Kyiv. Let’s recall that the training program in frames of the oncoming pride was launched by UPO Gay Alliance Ukraine and organizing committee of KyivPride 2016 supported by ILGA-Europe.

Potential members of the security group chosen for the first stage of the program were taught to respond to stress and conflict situations including provocative acts and physical violence. Team work with several people working on a unified position on certain subjects was also a very useful experience.

Besides, future volunteers learnt some practical experience of foreign prides from foreign trainers and accomplished some practical tasks on analyzing risks and dangers of public events. For example, one of the tasks was estimation of the obstruction risk for a certain event according to the script that was given to a group. One more task was to work out risks and dangers and chances to minimize them for public events as well as for private ones. Volunteers-to-be were asked to make a list of recommendations for the Equality March participants – what can and what cannot be done before, during and after the march and a list of things necessary for the participants (for example, you’d better take personal documents with you and don’t take glass bottled drinks).

The participants of the training were also told of basics of digital security, in particular, of necessity to protect social network accounts, personal and business e-mails and the documents. At the end of the training the volunteers tried to make a map with possible escape routes from the public action and suggested their ideas of withdrawal of organization of the participants. Together with the trainers volunteers-to-be analyzed the mistakes of the previous pride. The Equality March in 2015 showed that withdrawal was one of the most important parts that should be worked out before the event.

The training was very intensive – the participants pointed out sharing their impressions with each other that they didn’t knew a lot of things necessary for public events organization.

GAU has already informed that the program includes two more away events with workshops and trainings on safety of public events, on-site work of the volunteers and their further participation in the Equality March.