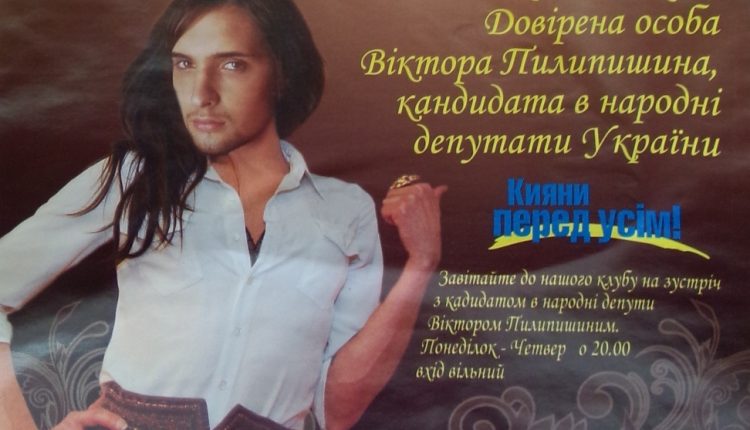 It is less than a week until the early elections to the Verkhovna Rada of Ukraine and political passions are being at their peak. The battle for votes escalated, because for some political forces, these elections are a matter of survival. Whatever means come into play – including black PR using LGBT topic, which is referred to among the people as "black&blue" PR.

Thus, on the streets of Kyiv city appeared some posters (photo of authorship of the UPO "Gay Alliance Ukraine" employee Stas Mishchenko) with a picture of a man resembling the popular Ukrainian pop singer Vitaly Kozlovsky in the image of "Eurovision" winner Conchita Wurst, which is accompanied by an appeal to the citizens, supposedly written on behalf of the famous Ukrainian singer. It says that the parliamentary candidate Viktor Pylypyshyn is the owner of a gay club, "Pomada" and a close friend of the artist, who, as his Trustee person agitates people of Kiev to support the candidate. 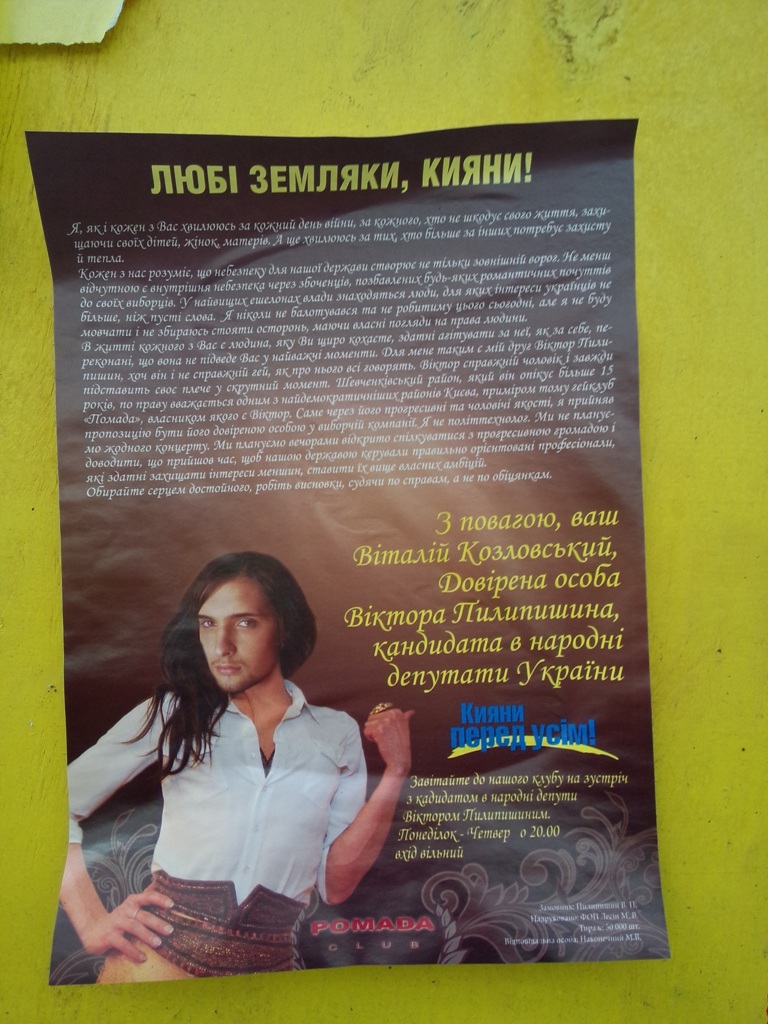 The inscription on the picture says: "Dear compatriots, Kyiv city citizens! I, like every one of you, worry about every day of war, about everyone who does not spare their lives protecting their children, women and mothers. And I also worry about those who more than others need protection and warmth. We all understand that our country is in danger not only because external enemy. An internal danger is equally noticeable because of the perverts without any romantic feelings for their voters. There are people the highest echelons of power, for whom interests of Ukrainians are nothing more than empty words. I have never run for election before as I am not going to do it  today, but I will not remain silent and not going to stand by having my own views on human rights.

In everyone's life there is a person you love the most, someone you are ready to agitate for as for yourself since you are confident that this person won't let you down in the most difficult moments. To me this person is my friend Victor Pylypyshyn, although he is not a true gay like everyone says about him. Victor is a real man and always provides support in difficult time. Shevchenkivskyi district, which he protects for over 15 years, is considered to be one of the most democratic areas in Kyiv as an example of this can be shown a gay club "Pomada", owner of which is Victor. It is because of his progressive and manhood qualities that I took his offer to be his Trustee in the election campaign. I am not a political technologist. We have no plans to conduct any concerts. In the evenings we are planning to openly talk to progressive community and prove that time has come that our country is ruled by correctly oriented professionals that are able to protect the interests of minority putting them above their own ambitions. Choose listening to your heart the most worthy one, make your conclusions according to their deed rather than promises. Sincerely yours, Vitaly Kozlovsky, Trustee of Victor Pylypyshyn, registered candidate for deputies of Ukraine. "Kyiv citizens above everything!" Visit our club to meet the candidate for people's deputy of Ukraine Victor Pylypyshyn. Monday – Thursday at 20.00. Free admission. Pomada Club. Customer: Pylypyschyn V.P. Published by: PE Lesin M.V. Edition: 50 000 copies. Responsible person: Nakonechnyy M.V."

"In everyone's life there is a person you love the most, someone you are ready to agitate for as for yourself since you are confident that this person won't let you down in the most difficult moments. To me this person is my friend Victor Pylypyshyn, although he is not a true gay like everyone says about him", – stated in the message. It also includes an invitation to visit the Pomada Club, where supposedly are held meetings of Pylypyshyn with voters.

Around the city are also pasted up other posters (photo of authorship of Yuri Shelyazhenko), which featured the name of the same Pylypyshyn in "black&blue" fleur. However, in these posters represents another candidate – the leader of "Radical Party" Oleh Lyashko who is accused of homophobia prosperity in Kyiv. "Most people are becoming homophobic as a result of the relevant upbringing, and Victor hates gays because of him suffering from homosexual violence. Now he feels a strong, clearly expressed unconscious homosexual attraction, due to which he is severely affected", – stated in the message. 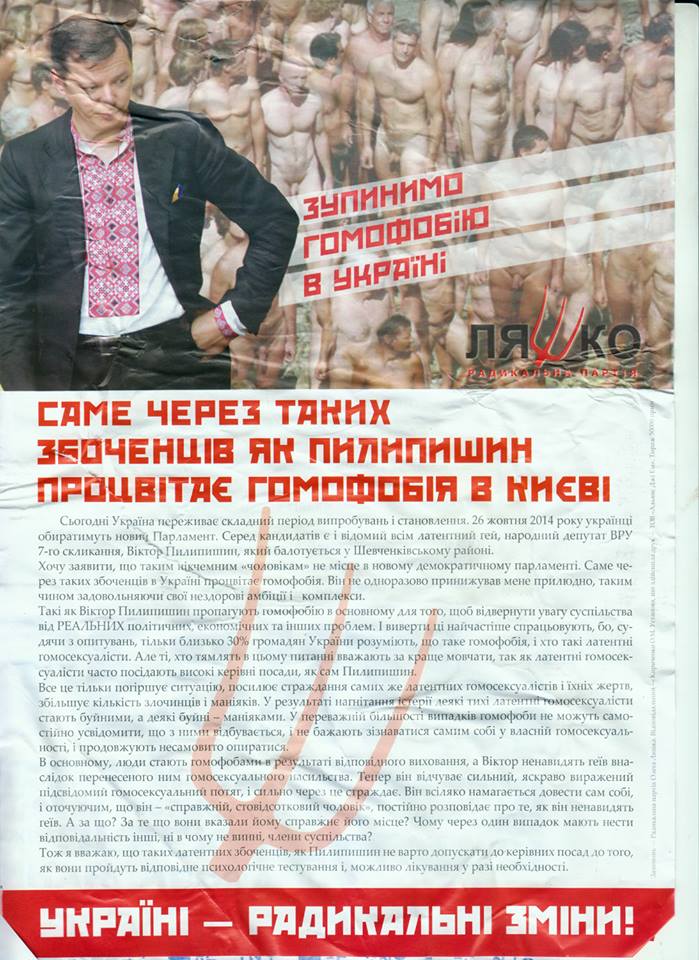 The inscription on the picture says: "Let's stop homophobia in Ukraine! It is because of such perverts as Pylypyshyn that homophobia flourishes in Kyiv. Ukraine needs radical changes!".

In Kharkiv "hunters" for mandates in the pursuit of votes by local residents also do not hesitate to act on the brink of a foul, writes the newspaper "Segodnya". In particular, in the 169 th district mailboxes were filled with leaflets, which content alludes to the supposedly homosexual orientation of a candidate for the People's Deputy Olexander Kirsch.

Let us recall that in October 2010 the leader of "Radical Party" Oleh Lyashko became the focus of sex scandal. Back then a video of his interrogation at the Prosecutor's Office in 1993 emerged in the Internet. The essence of the interrogation reduces to the description of relationships between Oleh Lyashko and some high-ranking official, whom he called "Borya". Lyashko complained to the investigator that Borya persuaded him to sexual intercourse in exchange for support and to find sponsors for the newspaper "Commercial News", where Lyashko was editor in chief.

In January of last year the People's Deputy candidate Oleksander Kirsch and the current Interior Minister Arsen Avakov were also involved in the sex scandal. Then a video appeared in the Internet, in which a young man and a man, similar to Kirsch, were walking naked around the apartment. Following the publication of the video the guy shown on it, made a public statement that he was for about two years a lover of Arsen Avakov, after which he "passed" him to Olexander Kirsch. The latter claimed that videos were created using video montage, and the guy is actually made him a massage only for a few times.