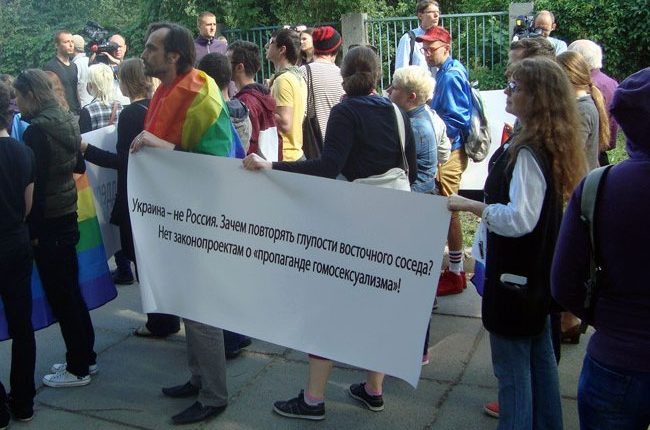 The inscription on the picture says: "Ukraine is not Russia. Why to repeat foolishness of our Eastern neighbor? Say NO to the draft laws banning "propaganda of homosexuality"!"

In a social network VKontakte group of the Russian LGBT Network appeared a message from Igor Kochetkov, the chairman of this public organization. In the message human rights defender expressed his opinion on how the situation in Ukraine affected the Russian LGBT community, and whether affected at all.

"Journalists asking: Has the war in Ukraine changed the situation for gay people in Russia? Has the movement "Crimea Is Ours" ("Krym Nash") created new opportunities for gay people in Russia? (For example, if a gay person stands for the annexation of the Crimea, do the homophobes forget about their "moral fight" against this gay person?) Has life become easier or worse? Or crisis in Ukraine has not changed anything in the Russian LGBT community? If "the party of crooks and thieves", thanks to the war, managed to get rid of their unpopularity and protests of 2011-2012, would the Russian LGBT community be able to do something like this as well?"

"I do not know what exactly and how will be published my answer to these questions, therefore I am posting here its full text", – writes Igor Kochetkov.

When in 2011 stared the homophobic hysteria on the background of the adoption of the laws on so-called "propaganda of homosexuality", we warned that it would not be the end. And we were right. Trying to restore their popularity the authorities began to incite hatred among the most poorly educated and disadvantaged groups of population towards their compatriots. They started with a witch-hunt for gays and lesbians, who supposedly provide some "propaganda among children". It followed by raids on people with "non-Slavic appearance" on the pretext of "combating illegal migration". And finally, – pressing on "the Foreign Agents" – non-governmental organizations whose "fault" is simply in that they are protecting the human rights of Russian people, help them to solve social problems – basically doing everything that the state should do, but somehow doesn't. Paranoia has evolved and, eventually, came out far from the national borders – the villains began to be searched for in the nearby area, bringing along a part of it.

Will the LGBT movement "make use of" this situation to please those who compare gay people to terrorists and encourages to "burn their hearts"? Thanks, but no, thanks. We are still in our minds, and we still have conscience and principles. And non-violence is the most important of them. LGBT not looking for any special rights and treatment. We stand for freedom and respect for human dignity for everyone. We will always act to protect all people whose dignity is being violated, who are being hounded in the media with invented wild stories and whose freedom is attempted to be taken by brute force. We know only too well how it feels. And that's why we support them.

There are very different comments under Igor Kochetkov's message from the representatives of the Russian LGBT community. Some of them indicate that homosexuals from the neighboring country no less exposed to the "Kiselev's propaganda" than the "average citizens". The original orthography is preserved.

1. "Doest it mean that you support the riot of fascism in the neighboring state? What is your text about?"
2. "Amost representatives of LGBT community, approves and supports the riot of fascism in Ukraine! It's about time to acknowledge them as extremists! And apply appropriate measures to them!"
3. "Listen! Let Crimea be! Whether you like it or not, the Crimea is nonseparatable part of Russia! And has always been! And it is not for you to decide! It is ridiculous to listen when it comes to some kind of annexation. You were not here! You culd not know all the truth! If there was any annexation, it happened only in your brains! The annexation of your brains!"