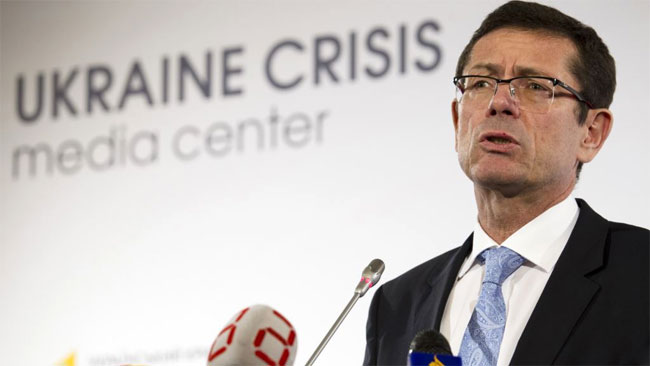 UN Assistant Secretary-General for Human Rights Ivan Simonovic has recently visited Ukraine. The main purpose of the visit – assessment of the human rights situation in the country. As reported Radio Svoboda, Simonovic stated that UN has recorded about 300 cases of attacks in the residential area in the East of Ukraine starting from the beginning of the conflict. However, the investigation of these cases did not give any results. "If we talk about the number of crimes and the number of other violations of international humanitarian law and human rights, most of them were committed by members of illegal armed groups. We are continuously reporting on these violations ", – he added.

However the organization "Tryzub" (Trident), which took the responsibility for the breakdown of the movie session under the "Sunny Bunny" queer section within the framework of the international film festival "Molodist" in the cinema "Kinopanorama", was disturbed by another statement.

"UN Assistant Secretary-General for Human Rights Ivan Simonovic at a press briefing in Kyiv admitted that the United Nations will pursue a policy of imposing Ukraine the perverted representations about human sexuality. "UN holds a very clear position in regard to sexual orientation and gender identity, considering them as an indication for the discrimination cases", – he noted. <…> However, this is not the only curiosity by the United Nations. On Monday, December 15, in Geneva UN High Commissioner for Human Rights Zeid Ra'ad Al Hussein announced that the UN wants Kyiv to continue pension payments in the occupied territories. That is a type of "humanism" by UN: imposing of perverted norms and supporting terrorists", – reported on the website of "Tryzub" organization.

Not so long ago on the website of the "Right sector" was posted a message stating that: "Right sector" strongly declares that it is against the imposition of perverted representations about human sexuality to our society".

"We clearly distinguish people who are simply ill with homosexuality and other sexual deviations, and a consistent policy aimed at the promotion and legitimization of various perversions, to the destruction of traditional morality and traditional representations about the human and the family <…> The Military and political movement "Right Sector" will resist the work of the various destructive environments by using all of its structures. We always remember that we have front in the eastern part of our country, but also do not forget that there is one more internal front is opened against Ukraine!"