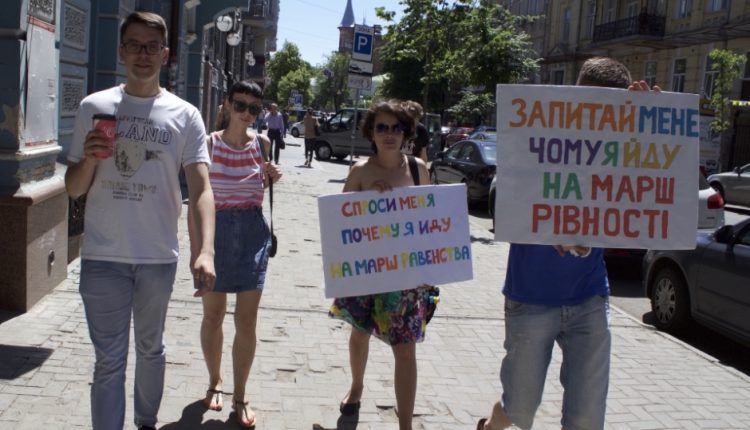 The inscription on the picture says: "Ask me why I am going to the Equality March"

On 4 and 5 of June within the framework of the International LGBT forum KyivPride2015 and under the support of UPO "Gay Alliance Ukraine" was held the workshop titled "Why do we have to do what we do, or the task, and the meanings of LGBT activism in Ukraine".

The first public action was held on Friday, June 5, near the Zoloti vorota ("Golden Gates"). Activists held posters in their hands offering to ask why each of them was going to the Equality March. In the light of recent events, when politicians and political organizations not only fail to ensure compliance with the constitutional rights and freedoms of citizens, but also occasionally openly threaten to disrupt the March, of course the citizens of Kyiv are getting interested in what the Equality March is and why is it so important for LGBT people.

The Equality March – is a peaceful procession, designed to draw attention to the need to respect the rights of all people regardless of their sexual orientation and gender identity. The organizers of KyivPride claim that human rights are always on time and such issues can not be postponed for later. The Equality March – is an opportunity for LGBT people to be visible, since if the group of people does not exist in the public consciousness, and nobody speak of them – than the observance of their rights is also out of question.

"I raise my child in partnership with a woman. I want in case if anything happens to me he would stay with his second mom to whom he attached from the very birth rather than went to the orphanage. I want to fight for the adoption of the laws in our country that would protect my child and my family, as well as many others. The only way that I've got to do now – is to participate in the Equality March", – said the participant of the action, the head of Kherson organization "Insha" (Another One) Maryna Usmanova.

Many Kyiv citizens expressed their support to the participants of the action and even asked how to join the Equality March.

Let us remind our readers that this year for safety reasons, in order to participate in the March registration is needed. It is possible to get registered at the website of KyivPride.