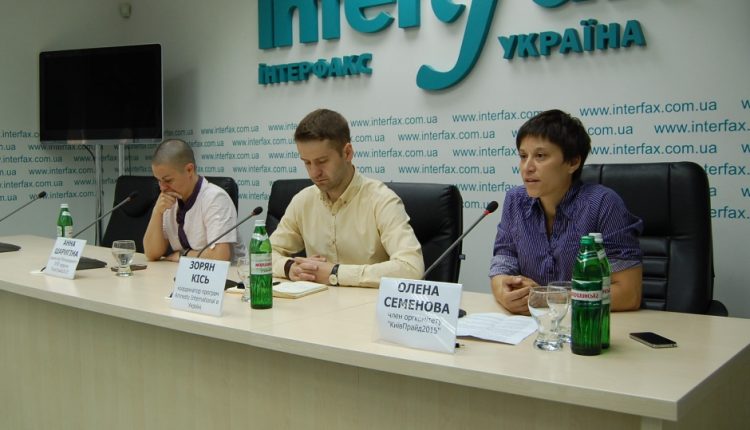 Kyiv city police gave the organizers of the International LGBT Forum "KyivPride2015" a choice of two venues for conducting of the Equality March: the Obolonska Naberezhna (embankment) or Kyiv Chaika Airfield. The agreement with the city administration was reached the day before the March.

It was reported at the press-conference entitled “Outcomes of the KyivPride2015 and the Equality March” by Olena Semenova, a member of the KyivPride Organizing Committee.

“We were given two venues for conducting of the Equality March to choose from: the Obolonska Naberezhna or Kyiv Chaika Airfield. Naturally, we agreed on Obolon. Basically we had no choice”, — said Olena Semenova. She also underlined that during the Organizing Committee meeting at the Kyiv City State Administration, the Head of Police Department of Public Order in Kyiv declared frankly that he would do all it should take in order to force them to give up on the March.

Apart the representatives of the Organizing Committee pointed out that the agreement with the police on the venue of the March was achieved only on June 5. “We were not even given time to think about the city center or of any other close by areas. Accordingly, as a result, the escape routes from the March for its participants were not properly discussed and therefore the participants were not protected”, — reported Olena Semenova.

“We tried to arrange buses to take people away from the March venue and to ensure their safety. But transporters refused us. One of the transport carrier services told us directly: “We can take mass media, we will transport diplomats, but not the fags”. Like that. And here you ask about what kind of discrimination we have to deal with”, — emphasized the organizer of KyivPride2015.

Nevertheless, the Organizing Committee of the International LGBT Forum "KyivPride2015" and Amnesty International expressed their gratitude to the ordinary police officers who protected the participants of the Equality March and, in fact, took a hit of radicals over themselves.

Let us recall that the Equality March was held on June 6 at the Obolonska Naberezhna, it was attended by about 300 people, including foreign diplomats and people's deputies of Ukraine. More than 1000 police officers guarded the public order. Despite the secrecy, a group of right-wing violent youths attempted to attack the participants, but was stopped by the police. As a result of blast of an improvised explosive device at the March venue two police officers were injured, one of whom got shrapnel wound in the neck and was hospitalized in serious condition. Confrontation of the police with right-wing radicals continued in the backyards near embankment and close to the shopping and entertainment complex “Dream Town”.

Altogether as a result of the fights near the March venue were injured  9 policemen, 10 protesters and several opponents of the March.