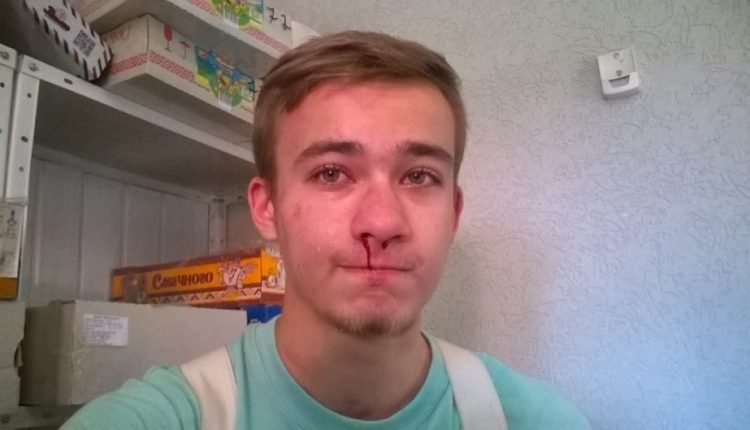 We had already written about police officers affected by the attack of ultras during the Equality March in Kyiv. Police protected the participants at the time of the procession – but after it was over radically minded young thugs announced "safari" on participants of the action.

As the result – nine people with minor injuries, dozens involved in various conflicts, both with and without fights, and hundreds of people who now lost the feeling of safety.
According to what one of the injured, Nikita, told us he and two his friends were coming back from the march, trying not to attract attention, when they were attacked. His friend had his lip smashed, but he managed to escape. Nikita was hit in the face with force for several times and thrown on vegetable trays. His friend cried out for help and pleaded to call the police, but faced only indifference of the passers-by. Nikita being in semiconscious was taken to a nearby shop, where she and the other friend called a taxi. As a result, Nikita diagnosed a broken nose, crooked teeth and suspicion of concussion.

Another participant of the Equality March named Stas was knocked down and beaten, aiming at the face. He has his lip split and hematoma under his eye.
Rostyslav was also hurt being heavily kicked. He was not medically examined yet, but he has a reminder of meeting the radicals in a form of pain in the back and a bruise on his face.
The bottles were thrown at the participants who walked away back home after the March. One of the bottles hit Vitalii at his back. According to him should the bottle have flown a second sooner it would have reached his head.

All the victims are being provided financial aid from the UPO "Gay Alliance Ukraine" and the Organizing Committee of KyivPride2015. For legal and psychological support you can contact the organizers of KyivPride by: [email protected].

Meanwhile, according to a lawyer of KyivPride Ksenia Prokonova, three applications on physical attacks have been filed to the Obolon district police department at the day of the March and several more statements are being prepared for submission by the participants of the march from other cities.

Read also: More than 20 people got injured during the Equality March.