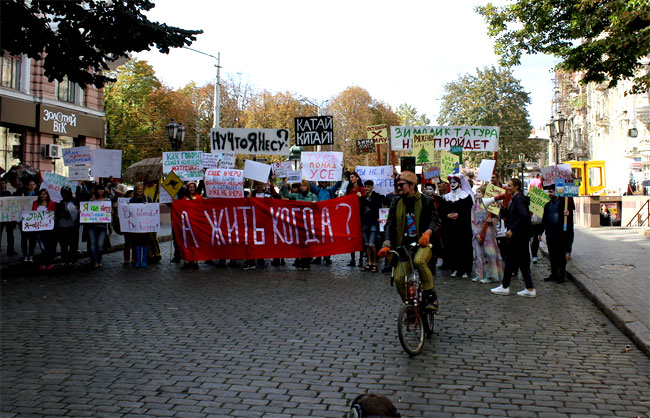 In Odesa first monstration in the city history took part, i.e. – nonpolitical demonstration with the mottos that seemed absurd at first glance.

About a hundred young people walked through the city centre from Soborna to Dumska square, holding signs. The sign messages were funny and had nothing to do with politics. Still each of them had a certain subtext undertone.

Big sign saying "When will time for living come?" was in the lead, as well as two smaller ones – "Winter dictatorship won't work" and "What a nonsense am I talking?" (literally in Russian – what am I carrying?)

Then monstration members had personal posters saying: "I'm just asking", "Winter spreads A.R.V.I." (acute respiratory viral infection), "How can I explain winter to my children?", "Life is like a banana. You never know why", "Against same-sex carriages" (in the original it says "Against same-sex crayfish" as Russian word for crayfish sounds very similar to Russian word for marriages – "raki" vs. "braki"), "We are closing gestalt" and other messages, absurd and non-absurd ones. 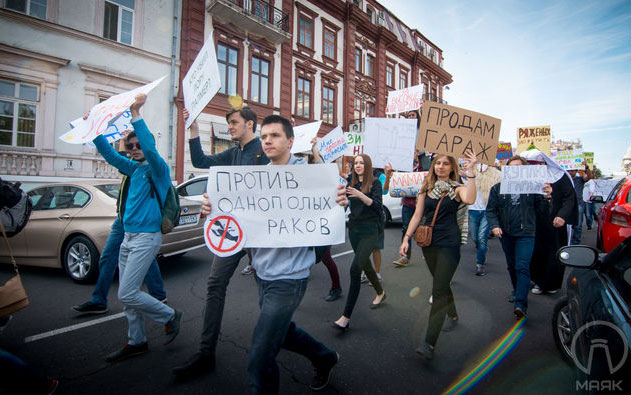 Young people were chanting such mottos, familiar for Odesa natives, as "The driver, the fare was given from the back part!", "Milk, cottage cheese, sour cream!", "Account refill!"
The event was organized by Odesa adventurers club. Of course, Queer Home Odesa activists could not miss such a meeting and participated actively alongside with AUCO Fulcrum and initiative group of the Sisters of Perpetual Indulgence.

Vitalii Tsariuk, the coordinator of AUCO Fulcrum in Odesa, came up with the idea of protesting against something natural in a similar way others often protest "against sexual orientation." So the idea of "winter" signs appeared: "How can I explain winter to my children?", "Winter dictatorship won't work", "Winter spreads A.R.V.I.", "Winter will burn in hell", "Allow winter to come once and it will stay for the whole year" and also "Winter ruins the institution of meteorology".

"Everything that happens in Ukraine now is of political or economic colouring, whereas social troubles take a backseat. We see such an event as the opportunity to speak of social problems in light of humor and satire," gave her comment on the event Anna Leonova, Queer Home Odesa coordinator and the head of OdesaPride organizing committee.