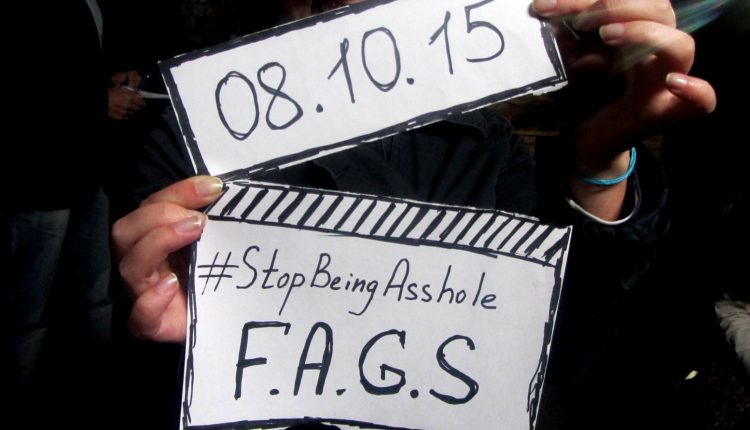 Ukrainian and Moldovan activists, including Gay Alliance Ukraine representatives, made a provocative video. It satirizes how many people take such notions as tolerance and liberality as bad habits, the same as alcohol or drug addiction. The video is titled "Fallen Assholes Group Support", abbreviated F.A.G.S. The group meeting is similar to AA society style: its members sit in circle and tell stories about how they abstain from tolerance and stay "clean". Or how they don't and have a meltdown.

One of the men admitted with shame that he was a guest at a gay wedding and enjoyed it. Another one confessed that he offered refugees some food, drinks and shelter. "You must be joking," says somebody in the group disappointedly.

The finale of this ironic video is the inspiring speech of the coach who tells that the main goal of the group members is to be "jackass, dickheads and bitches" again. Then all the members hold hands and chant "We are assholes". The video ends with the question "What about you?" on the screen.

The main idea for this video appeared from the problem of tolerant behavior in regard to the people of different race, religion and sexual orientation that is common for many countries. Forinstance, inSweden 3.5% of the surveyed would not like to live next door to the refugees. In Ukraine it is true foralmost 20% of the surveyed, as the press release of Social Campaigning School informs.

The video was made by the participants of the international project of Social Campaigning School that took place from 4th to 11th of October in Odesa. Oscar-winning German director and producer Albert Kitzler became one of the external experts sharing their experience of making short films.

Social Campaigning School is the project of German Stahlmedien and Carta organizations supported by the German Ministry of the Internal Affairs. All-Ukrainian association InstytutRespublika (Republic Institution) is the partner of the project in Ukraine.

The court did not consider motive of hatred of LGBT while passing sentence on Zhovten Cinema arsonists, the lawyer of the cinema informed