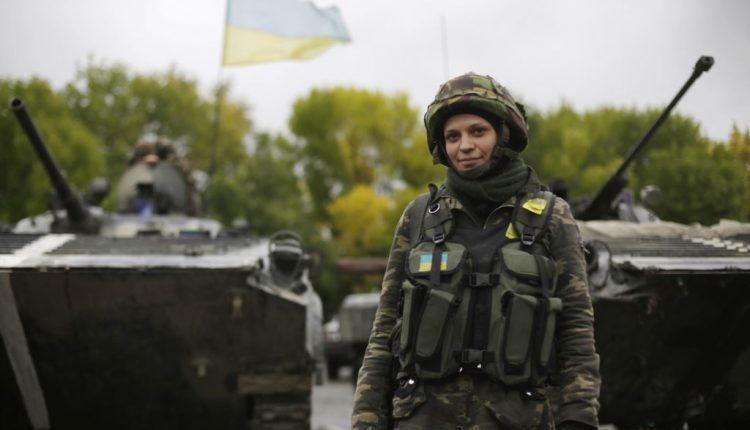 The results of Invisible Battalion social research, dedicated to the participation of women in combat activity in ATO zone were recently presented in Kyiv. This is the first detailed survey of women’s position in Ukrainian army.

Such issues as legal aspects of women participating in ATO, everyday circumstances of women being there, gender stereotypes regarding servicewomen and their representation in mass-media were covered by the research.

The review of laws and mass-media, field researches and questioning women, serving on the scene of fighting, formed the basis of the research.

It is discovered that there are stereotypes referring to servicewomen among military personnel and commanders of armed forces, as well as legal conflicts, household troubles and lots of other issues that women have in ATO zone.

In practice women are not permitted to make decisions in the Armed Forces of Ukraine. All those positions that have “commander” or “head” in them are not for women. Lots of women in the army are not legalized so they have no possibility to get benefits and payment for their work, as Invisible Battalion materials say.

This situation with women in ATO zone is partly caused by the Armed Forces of Ukraine being part of job market. Women rights are defined with that labour legislation that has Soviet norms of regulation of women labour.

“Our respondents told that they could be officially registered as accountants or baths administrators. Women are not allowed to make decisions at all. This situation must be changed,” says one of the researchers, Tamara Martseniuk. “Men are also different, not all of them want to be in the war or can do it. Our experts define that compulsory military service for men is also case of gender-based discrimination.”

According to the research, about 14.5 thousand women work in the Armed Forces of Ukraine now and only 35 of them hold key positions in the Ministry of Defense and the General Staff.

Invisible Battalion research was performed by the group of experts supported by Ukrainian Women’s Fund.

Odious and famous artist will make art-intervention in Kyiv

Gay-porn studio was discovered in Dnipropetrovsk